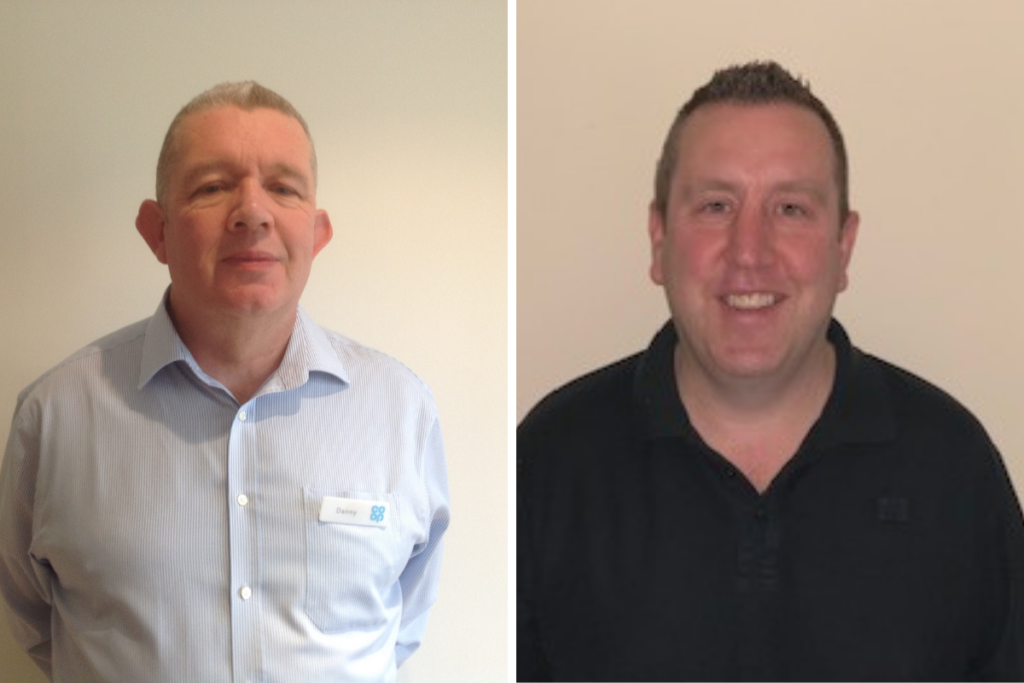 On-call firefighter Shane works for both Derbyshire Fire and Rescue Service and The Co-Op. First choosing The Fire Fighters Charity as Charity of The Year at his own store, Shane went on to work with Regional Operations Manager, Danny Howarth, to persuade 29 other managers to follow suit. Together the Co-Op stores have since raised over £45,000 for the Charity.

Their entrepreneurial relationship has helped orchestrate conversations between the Charity and similar ventures, as well as helping to promote our services to the general public through displays and promotional materials in participating stores.

Danny was inspired by conversations with Shane, a retained firefighter and Co-Op store manager in Shirebrook, see that our Charity was an attractive and great one to work with. He was also impressed with our approach and the support we gave to the store while it had chosen to fundraise for us. Also, a couple of Danny’s stores had had fires, and he wanted to give something back to those firefighters who attended, risking their lives to extinguish the fires in the buildings.

Shane is also a Watch Manager at Shirebrook Fire Station in Derbyshire and is the Station Rep there. He continuously supports the Charity and signposts colleagues and retired members to the Charity to access the services. He also encourages friends, family, colleagues and the public to sign up to RG Lottery.

Their working relationship is a fantastic example of people thinking outside the box, with the meeting of two minds coming together to see an incredible result for The Fire Fighters Charity. 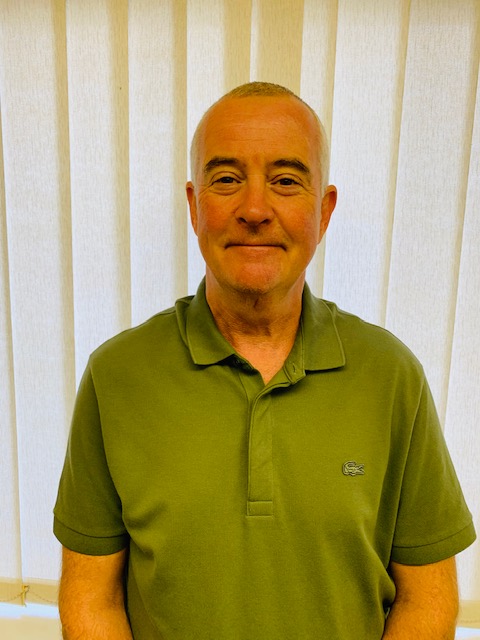 The leading textile recycling partner for the Charity, D Robinson & Co have generated well over a staggering £4million, over 11 years, through the management of a nationwide consortium of recycling partners. That’s a huge amount of the nation’s unwanted clothing also saved from landfill.

Robinson’s also provides all of the recycling banks in the middle of England, with our fire and rescue personnel often commenting on the helpfulness and happiness of their staff when they speak on the phone. They regularly provide fire stations with reports detailing the amount of weights collected from each one, meaning service coordinators can gather quarterly progress reports to see how their service measures up against others.

And of course, during our January recycling competition where we encourage all fire stations to up their collections and promote the banks in local communities, Robinson’s play an integral role in the management of collections across the country.

When the inevitable accidents happen and car keys or even engagement rings are accidentally deposited alongside textiles donations, Robinson’s are always on hand to send out a driver with a key on the same day to quickly resolve things, no matter how far it is from their base.

In their nomination reason, their nominator said this: “Each person I’ve met, from the drivers to Paul, the owner, is always happy and cheerful. Their positive, can-do attitude inspires others to help, and takes the hassle out of fundraising.” 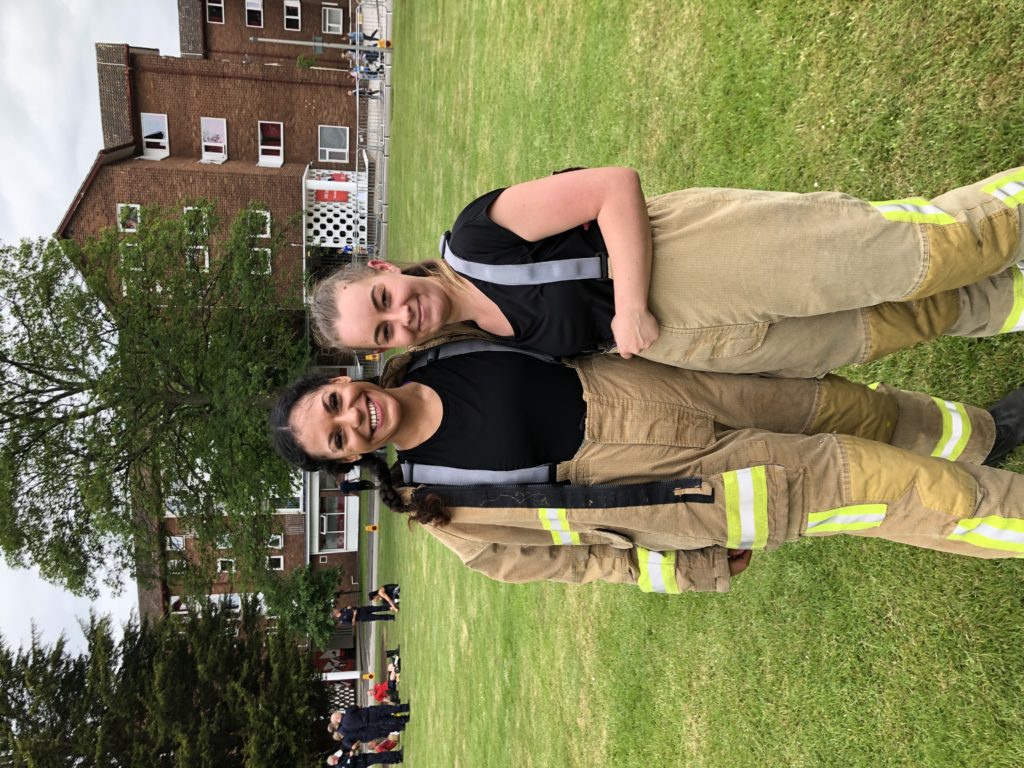 Aspray is an insurance loss assessor company, who wanted to support The Fire Fighters Charity after seeing the situations firefighters face at incidents, as their company is often called to fires after they’ve been put out.

With one of their members of staff having a firefighter sister at Blackburn Fire Station, Aspray had heard of our Charity and the work we do to support serving and retired fire personnel and their dependants.

Aspray approached us about ways they could support us, eventually settling on a two-year partnership, using their national network of field agents to do some fantastic fundraising for us.

Staff events that have taken place so far include a firefighters experience day at Lancashire FRS Training Centre, helping out at numerous car washes at fire stations around the country, and inviting us to speak at their national conference. One of their claim handlers, with zero affiliation to the fire community, who chose our Charity to race the London Marathon for as well, raising over £2,000.

Although we are in the early days of our partnership, we have been so impressed with the energy and enthusiasm of Aspray and all who work there. It’s clear they really care about the Charity and our community. They are even having conversations with the rest of the insurance industry about the potential for supporting us, showcasing all the work we do for our beneficiaries in the blue light community, who are so intrinsically linked to the work of the insurance industry.

The Ivy Spinningfields Manchester, a restaurant and bar 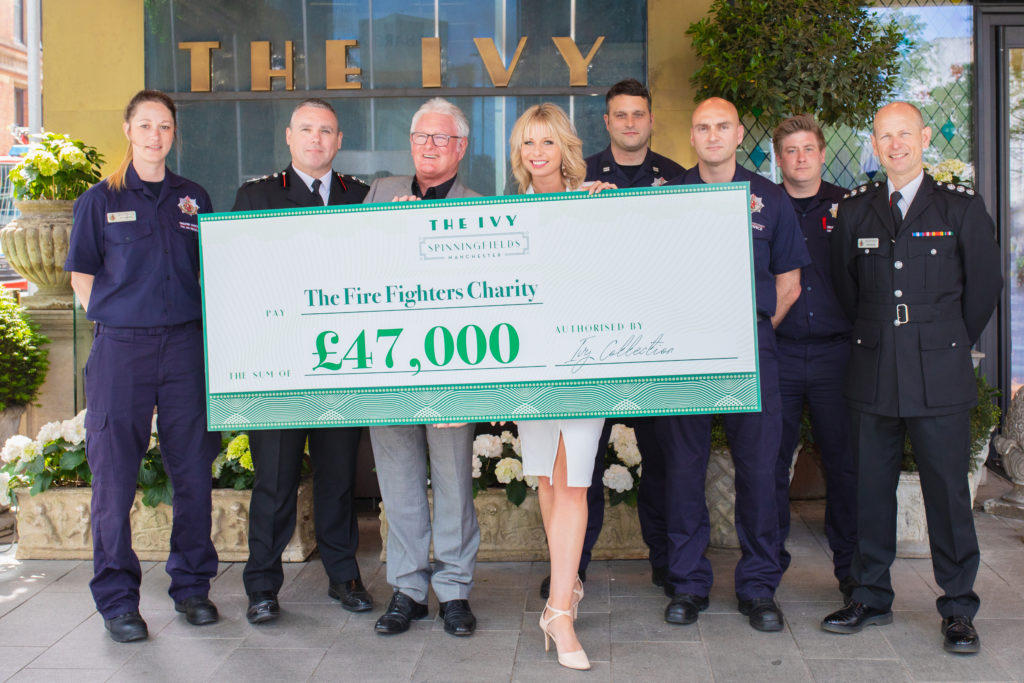 In January 2019, there was a large fire at newly-opened The Ivy, an exclusive restaurant/bar in the heart of Manchester, where a patio heater had fallen. Attended by Green Watches from several Manchester stations, crews were able to safely evacuate all staff and customers, before restricting the spread of the fire to only the third floor, saving the first and second in the process.

Once the rebuild was complete several months later, The Ivy expressed a desire to do something to say thanks, and held an exclusive party with tickets sold for £100 each to many celebrities and local VIPs. It gained a lot of national and local interest thanks to its guest list, with promotion for The Fire Fighters Charity heavily featured.

The sell-out event raised an amazing £47,000 for the Charity, nearly as much as a year’s budget for Greater Manchester Fire and Rescue fundraising as a whole.

Like many venues that have fires, they could have easily just carried on with the repairs, and ignored the works of the crews that night. The Ivy Spinningfields didn’t though, they went all out to pay back their love and thanks for the firefighters that night, who saved their brand new venue!

Many local firefighters also regularly now visit The Ivy to say thanks for supporting The Fire Fighters Charity, and the staff of the restaurant are hoping to visit Jubilee House to see the impact of their fundraising and the people who they’ve helped.