A former firefighter and beneficiary of the Charity appeared on George Clarke’s Amazing Spaces on Thursday 7 January, sharing the renovation work he and his partner completed turning a 40-year-old fire engine into a mobile bar, with profits coming to The Fire Fighters Charity.

The Blue Light Coffee Stop is open today 11am – 5pm. We are stocking some new products today from some amazing local companies. Our new cakes are particularly good 😋 #amazingspace #bluelightbar #Denise #charity pic.twitter.com/WjZq7G3uZB

Retired West Sussex firefighter Paul Weller has shared his story with the Charity in the past, explaining the support he received after struggling severely with his mental health. So when he and partner, Roxie Carpenter, a serving police officer, decided to buy and transform an old fire engine to realise a life-long dream, they knew supporting the blue light community would be a big part of their journey.

What they did not expect was to share their renovation story with a national audience, having got in touch with Channel Four’s George Clarke’s Amazing Spaces on a whim.

“We actually contacted them before we’d even bought one, thinking there was no way we’d hear back from them,” says Paul, who used to be a firefighter at Hayward’s Heath. “But they rang us back and said they loved our story and would be sending someone to film us the following week. So then we had to actually commit to buying one, eventually finding one down in Hastings.”

Denise (named because she was missing key letters on her Dennis model name) the fire engine then underwent four-months of transformation at the hands of Paul and Roxie, with a Channel 4 crew following their progress.

“It was definitely a labour of love,” says Paul. “I was down here every day, seven days a week for 12 hours a time, and Roxie would come on her days off and before or after her shifts. Neither of us know anything about restoring old fire engines, bodywork, or anything mechanical! But we figured we’d strip everything out first, take out what we didn’t want and make it into a shell. We watched a lot of YouTube videos for advice.” 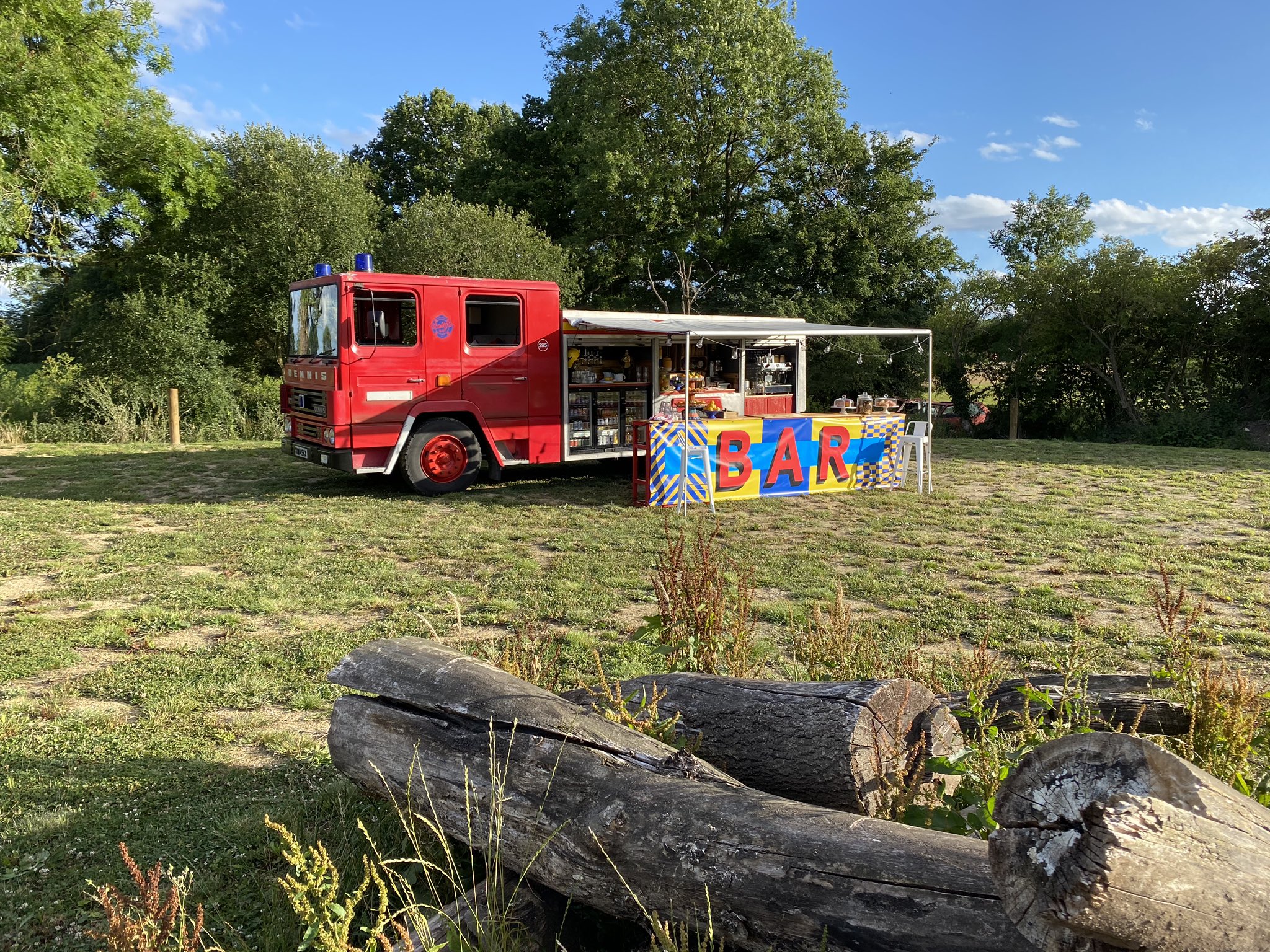 They finished their work in the second week of April last year, just a few weeks into the first national lockdown, which scuppered their plans for a big reveal and to take the Blue Light Bar out to events. But since being given residence in the barn of a nearby farm, the bar has become a much-loved location for takeaway drinks and coffees ever since: “I have to say how grateful I am to Simon and Hazel from Moat Farm, who initially lent us the barn to do up the truck before offering us a permanent residence,” says Paul.

True to their word, support for the emergency services runs throughout their business. They sell firefighter-owned Frontline Coffee and have a pay-it-forward scheme for people to buy a hot drink for keyworkers. They also plan to donate 20% of their profits to The Fire Fighters Charity, once they’ve finished paying back their loans.

“People need our help, especially at the moment with everyone working so incredibly hard,” says Paul. “So if we can do our bit to support emergency services personnel in the grand scheme of things, it might help. Plus The Fire Fighters Charity means so much to me, giving something back to you guys was obvious for me.”

Denise May be a fire engine but we at The Blue Light Bar are committed to supporting all members of the emergency services as well as the armed forces and NHS.
We are run by ex and serving members, all with a passion to help those in times of need #support #denise pic.twitter.com/fy5p1caqUL

Paul and Roxie were joined by English architect and TV presenter George a number of times during filming. And during their final session, he and Paul got talking about his reasons for supporting The Fire Fighters Charity.

“It was quite strange, opening up about something so personal to him, but since I shared my story with the Charity, it’s given me the confidence to talk a lot more,” says Paul. “I’ve learned that talking to people helps, as does not bottling things up. So talking to George felt like an extension of that. It was a mark of how far I’ve come and the progress I’ve made since I used to think that talking about your feelings was a sign of weakness. I’m not sure if they’ll show it or not on the show, but he actually got quite emotional while listening to my story.”

Paul and Roxie have big plans for their Blue Light Events, already having also renovated a dilapidated horse box on the farm into a coffee bar, and once life has righted itself again, plan on hitting the road: “We just want to do our bit to support the blue light community,” says Paul. “I was a firefighter for ten years, Roxie is in the police, and I am about to start a new career with the South East Coast Ambulance Service. The people you meet along the way make you realise how much we’re all doing our best, so that’s why it was so important to us to do our bit to help.”

If you missed it, you can catch up on Paul and Roxie’s episode of George Clarke’s Amazing Spaces on All 4.