Andrew’s #My75Miles Page
My ambition to run four marathons in four days to complete the 100-mile South Downs Way for #My75Miles Challenge (+ 25 miles) was not taken lightly. In hindsight though, the run/speed walk/limp to the finish line was tougher than I imagined.

The plus sides first: the South Downs Way over four, sun-splashed days at the end of October. For Belloc they were ‘the great hills of the south country’; Swinburne described them as ‘green, smooth-swelling, unending’; Kipling likened them to gigantic sea creatures: ‘Our blunt, bow-headed, whale-backed Downs’; Tennyson saw ‘Green Sussex fading into blue with just a touch of sea’; and Blake, whilst hanging out in Felpham trying to come up with a rousing football anthem, walked in ‘England’s pleasant pastures and mountains green’ for his future hit single, Jerusalem.

Now to the down sides of the Downs: not only is it around 100 miles long, stretching from Winchester to Eastbourne, it’s also much longer if your digs are not directly en route. If you want to stay in the best hostelries available, as was my want, it’s longer still. Much longer again if you keep getting lost and add a few more miles for the wide detours to avoid my old nemesis: the fearsome cow.

If you’ve never seen a field of fighting cows, you haven’t lived. It was like a Saturday night in Halifax (circa 1980s I hasten to add – I’m sure it’s much quieter now!). It started with a couple of young ‘uns kicking off: a bit of argy-bargy, udders at dawn type of thing, until they started head-butting each other.

“That’s odd,” I said to my companion as we leaned against the gate, contemplating how to get through this slightly threatening environment. “No, that’s odd,” he replied, bringing my attention back from searching for an alternative route. Within seconds the whole field of beasts had joined in. They were randomly head butting each other, full on charging, mooing triumphant battle-cries as they re-arranged each other’s brain mass. If you’ve never seen a field of head-butting bovines before, it’s certainly worth a look.

Regardless, I stepped into the melee. Well, I gingerly tiptoed around the periphery to see if we could avoid the disturbance. By this time a couple of the plumper pugilists had stepped back to take a breather, hence blocking every possible path through the field. I raced back, trod in a cow pat and cursed those darn monsters.

That incurred a minor detour. However, there is more than one field of bovines on the South Downs Way and although the other cows we encountered appeared docile in comparison, our risk appetite had diminished. Vaulting electric fences in the dark, landing in cow pat smeared grass and being smothered in dung incurs no lightweight emotional smear on an exhausted runner.

Still, Tennyson and co were not wrong: the South Downs Way is truly a sumptuous delight of rolling hills with glimpses of sun sparkling off the sea. Limping into Eastbourne using an improvised walking stick, battered, bruised and torn, there was naturally an exquisite burst of triumph and relief: cows be damned, it was all worth it in the end!”

If you’ve taken part in the #My75Miles challenge, we want to hear from you: 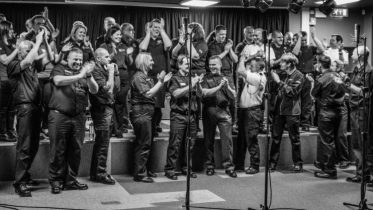 Could fire fighter choir scoop the Christmas No.1?

A group of fire and rescue personnel from across the UK have joined forces to record a charity cover of Live Aid's 'Do They Know It's Christmas?'

Mark: "They helped me put my demons to rest"

Watch Manager, Mark Schofield, explains why taking on the My75Miles challenge has helped him to come to terms with his PTSD.