Name: Kris Feaviour
Age: 41
Role within the Fire Service: Not a fireman, but I have a huge amount of respect for the work they do and wanted to contribute
Reason for taking part: My brother was involved in serious RTC 9 years ago, and thanks to the amazing work of the fire crews that night, he is able to fulfil a normal life, including playing rugby.
Position: Usually back row/second row, but will play any given, usually hang around at 10, will migrate to the wing the closer we get to the try line

My brother is younger than me, three years younger in fact, but near enough in age that we have grown up the closest of friends. He is two inches taller, about three stone lighter, and is a sports freak. At school he was 1st XV Rugby captain, played 1st XI hockey and cricket, he went on to captain the Cambridgeshire County Rugby XV at U18 level, and then Eastern Counties Captain at U18 level, so you can see what I mean about him being a sporting freak, every sport he plays, he is good at….it’s so annoying.

After he left school, he went to University at Leeds Metropolitan and graduated with a good enough degree to get a role in teaching….guess what, yep, Sports. He is now a Director of Sport for a school in Norfolk, and is regarded as a fine teacher, respected by his peers and his ex-students go out of their way to speak to him. Happily married with two wonderful children, he has a life many yearn for – an all round lucky guy. It could have been so, so different.

On the 5 November 2008, my brother was driving home from a late night at school, driving a road he had driven a hundred times, when his life was changed in an instant. As he approached a junction, a car load of teenagers cut across him at the last minute and he hit them, hard, at nearly 60mph. His car was a right off, their car was a right off, but whilst the teens walked away unharmed, my brother was badly pinned, and had broken his femur in half.

That night, Fire crews from Wisbech rushed to the scene, and cut him from the wreckage, my brother was in a huge amount of pain, with a badly broken leg and several other less serious injuries. Once at the hospital, he was quickly operated on and his leg was pinned, left in an adjustable splint to help the bone ‘re-grow’. Now the femur is a big bone, one of the strongest in the body, and as such, one of the most difficult to heal. Due to the nature of the break – it was a clean ‘snap’, the bone went into a form of shock and initially refused to ‘re-bond’ to itself, talk of amputation was mentioned, but never fully considered, the frame and operation had to work.

After nearly 12 months of physio, hospital appointments and recuperation, he was back to work, with a slightly shorter leg, but able to do pretty much all of the things he did previously, including competitive sports, something that was always a distant option. The surgeons, doctors, anaesthetists and physios did an amazing job over the course of that year, giving my brother his mobility back, they deserve a medal for the work they did.

So why have I decided to recount this story  you may ask, why am I telling you about my brother? Well, before the medical teams got to work that night, the fire crews who attended the scene had to do their job. Their skill, training and unflappable control at the scene of a traumatic accident saved my brothers leg, without their ability he may never have had a leg to learn to walk on again, let alone play rugby.

We’ve all got stories about how we owe our lives, or members of our family, or even our friends and colleagues, to the work of the fire crews in this country, but do any of us remember their names? Do we remember who was there to rescue us from our car? Or from a building fire?

I doubt it, we remember a calm voice, a determination to do their job and a skill set so diverse that we count on the Fire Service in this country for everything from reacting to terrorist attacks, to a chip pan fire, and everything in between.

So, on 12 May this year I will be giving something back to those individuals who were there for my brother, and the literally thousands of people whose lives they affect on an annual basis.

I am playing rugby for 31 hours in aid of The Fire Fighters Charity, a charity which helps its members with everything from emotional support to life changing injury in the line of duty. It is a World Record attempt, played at the home of the Worcester Warriors, and will feature 46 players prepared to play 23 games of rugby back to back…..it’s a phenomenal challenge, and one that will be physically draining, but I can’t think of a better way to try and raise some money for such a fantastic cause.

So, if you, or someone you know, has had a similar experience to my brother, or you yourself have been affected by the work of this incredible service, please give what you can. Don’t think of it as sponsoring me directly, think of it as giving to a service that gives everything to us.

That’s it, anything you can give would be appreciated, here’s the link to my Just Giving page, and I thank you all in advance for giving my story a read. 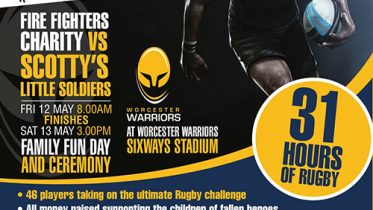 How to watch the match

All you need to know about the match 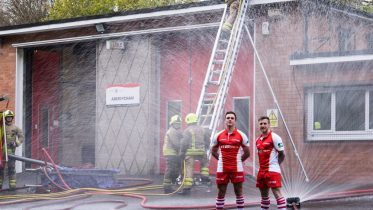 Take part in an event

Find out how you can take part in an event