Firefighter Kristopher Elliot and his brother Blair are preparing for December’s Talisker Whisky Atlantic Challenge, a 3,000-mile endurance race across the Atlantic Ocean.

The brothers are taking on this gruelling challenge to raise money for our Charity and in memory of their boss, colleague and friend, former Watch Manager John Noble.

John was tragically killed in 2008 when the fire appliance he was travelling in was involved in a road traffic collision. The crew was responding to an emergency call at a local school.

Kristopher said; “We feel a fitting tribute to Johnny is to dedicate this race to his memory and for us to raise much needed funds for firefighters across the UK who may need the charity’s help.”

Training for this event is no mean feat – currently fewer people have rowed the Atlantic than have travelled into space or climbed Mount Everest. The expedition will start in Spain’s Canary Island of San Sebastian de La Gomera where rowers will then head west to Nelson’s Dockyard English Harbour, Antigua. As soon as they leave the safety of the harbour in San Sebastian de La Gomera they will be on their own, and pitched up against 40ft waves, sleep deprivation and the ever present threat of shark attacks. 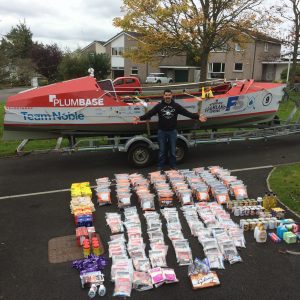 Kris with all the supplies the pair will need for their crossing.

The challenge, which has taken three years to plan and could take 100 days to complete, originally consisted of a team of two firefighters, Kristopher and Allan Huntly from Stirling Fire Station. Unfortunately Allan had to withdraw at short notice , meanging that Blair had to step in as a late replacement.

Testing their physical and mental strength to the limit in what has been described as the world’s toughest row, Kristopher and Blair have been completing sea trials across the West Coast of Scotland to maintain their training regime.

Kris commented; “Rowing plans are going great. We have been out on the West Coast of Scotland every week for the past six, making the most of the water.

“We have teamed up with former Xterra Triathlon World Champion, Lesley Paterson – our new Patron, who is now running our training programmes.

“We are preparing ourselves physically and mentally every day of the week at the moment, and we can’t wait to get started!!”