After already raising more than £2,000 for The Fire Fighters Charity, Andrew, who is on the autism spectrum, has set off from our Headquarters in Basingstoke on day two of his 133-mile cycle ride from Portsmouth to London.

Andrew, who has always had a passion for the fire service started his original adventure back in 2015 when he visited 390 UK fire stations or fire-related places. To date he has visited 1,050 fire stations in the UK, 51 in America, two in France and 10 in Denmark. This year he was also made an honorary member of the New York Fire Department for his fundraising efforts.

Paul Impey, Andrew’s dad said; “When he started his original quest to visit all the fire stations he couldn’t read or write. Where Andrew is autistic it has brought him out of his shell, he now communicates, he reads, he writes. His visual challenge is to raise awareness of autism within the fire service and raise awareness that the fire brigade don’t just fight fires, they do other things.”

After visiting Grenfell Tower Andrew was so touched by the terrible events in North Kensington in June this year, he decided to challenge himself even further, and added the mammoth bike ride to his already admirable fundraising efforts. 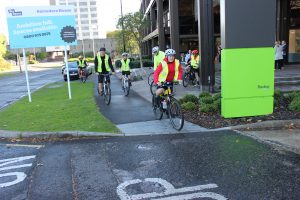 Paul continued; “During his travels he bumped into a firefighter that had been helped by The Fire Fighters Charity and so he has just taken it under his wing, especially with Grenfell Tower. As this bike ride is going past Grenfell Tower, he wants to raise the money to support his firefighter family.

“I am just totally amazed about his passion and focus for doing it, and while he is doing it we will support him. As he said, its one lad’s challenge not one dad’s challenge, so I am just here to facilitate and make it happen, it’s him doing the work.”

Firefighters from Basingstoke Fire Station and the North Hampshire Group, who joined Andrew for part of his ride, were full of praise for the super fundraiser.

Ryan Thurman, Group Commander (North Hampshire Group), Hampshire Fire and Rescue Service added; “It’s fantastic what he is doing and a real privilege to be able to join him for this part of the journey, we will leave him at the county border and wish him well on his journey.”

You can donate via Andrew’s JustGiving page here.