Andy Howard, 46, Watch Manager for Wolverhampton Fire Station has been training hard to achieve his #My75Miles goal by rowing 10,000 to 30,000 metres a day.

Andy’s 75 Miles Page
Andy’s row will take place on Saturday 6 October at the Nuffield Health Wolverhampton Gym where the team there have kindly accommodated him and helped support his challenge. He is anticipating to row 10,000 metres every 50 minutes with a ten-minute break for food, with the aim of completing it under 13 hours.

Andy, who has already raised more than £2,000, said: “I love a challenge and have completed many endurance events in the past, including a 126-mile canoe race from Devizes to Westminster with my colleague in a two-man kayak, so I thought my next challenge could benefit others. I know how much support and help The Fire Fighters Charity can give and have seen the great work and benefit the Charity provides to both serving and former firefighters and their families.

“I’ve received some great support from my Watch too as we’ve all signed up to The Virgin Pulse Global Challenge, which takes us around the world depending on how many steps we are doing. It’s been good fun, made us aware of our physical activity and helped us maintain our fitness levels.

“I have previously been on holiday to Harcombe House in Devon, where I stayed in one of the bungalows. Whilst there I chatted with people from different brigades who were there on recuperation or receiving physiotherapy and they all spoken highly of the services provided. I have also had colleagues who have been referred and they’ve said that the support they received helped keep them at work and maintain a good standard of health.” 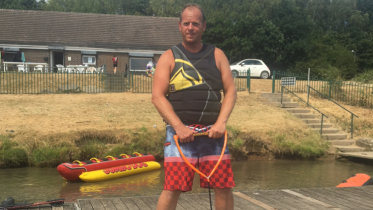 This is #My75Miles: DCFO Phil Shillito

An advocate of positive mental health, Humberside’s Deputy CFO, Phil Shillito is wakeboarding his 75 miles to support the Charity's development of this area.