Derek benefited from time at Jubilee House. Find out how you can holiday there.
Learn more

Derek Wilson suffered a life threatening injury when responding to a shout and used the Charity's services to help him get back on the run. 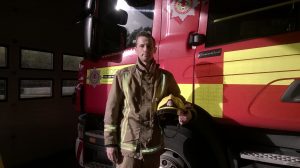 Sit down to listen to Scottish firefighter, Derek Wilson’s story and you can’t help but wonder at the fragility of life.

He responded to a shout, as he always did, by jumping on his bike and cycling to the station. However, on this day he cycled around a corner en route and hit a parked car.

Derek remembers; “I went through the back windscreen head first. Dazed and confused, my first instinct was to pull myself out of the car. It was at this point I severed my jugular vein and all the surrounding muscles. Unaware of the severity I fell to the ground.”

Another crew member, a good friend, heard his cries. To stop the flow of blood, he stuffed a pair of socks into the hole in Derek’s neck and held the pressure until the ambulance arrived. Derek was taken to Campbeltown Hospital, a small rural hospital. Due to the severity of blood loss, Derek’s body was starting to close down. The hospital staff were struggling to save him, including his fiancée who was a nurse, and the hospital were running low on blood. His family were told to prepare for the worst.

“I have never known such a well-deserved Charity. They were excellent. Six months later I was back at work.”

Derek continues; “The Sister-in-charge insisted I was airlifted to the Western Hospital in Glasgow. The surgeon sewed up my vein and the surrounding area back together. When the vein was sewn up, that was it. The blood was replaced and I was out after just three days. I was a piper in the World Championships and the surgeon said the hugeness of my neck muscles is just one of the reasons I am still here .The surgeon was the best in Scotland, if not the country.”

Derek was introduced to the Charity’s then Service Coordinator, who is now a very close friend, who told him to apply for rehabilitation at Jubilee House. He attended Jubilee House a few months later.

Derek says; “Everyone was lovely. They were so caring, so gentle and so understanding of not just the physical but the psychological aspects as well.”

“The recovery wasn’t easy. I wasn’t sleeping. But I did the sleep deprivation classes at Jubilee. My time at the Charity helped me no end as did the unwavering support I received from all the boys at Campbeltown Station.”

The crew member who found Derek was nominated for the Daily Mail hero awards.  Derek enthuses; “Because of his actions I am able to see my daughter grow up. Everything I do from now on in my life is down to him.”

Derek married his partner not long after the accident. Instead of leaving wedding favours for guests, Derek and his wife donated the money to the Charity. He enthuses; “The people in the brigade, including the Charity, are very close to my heart.”