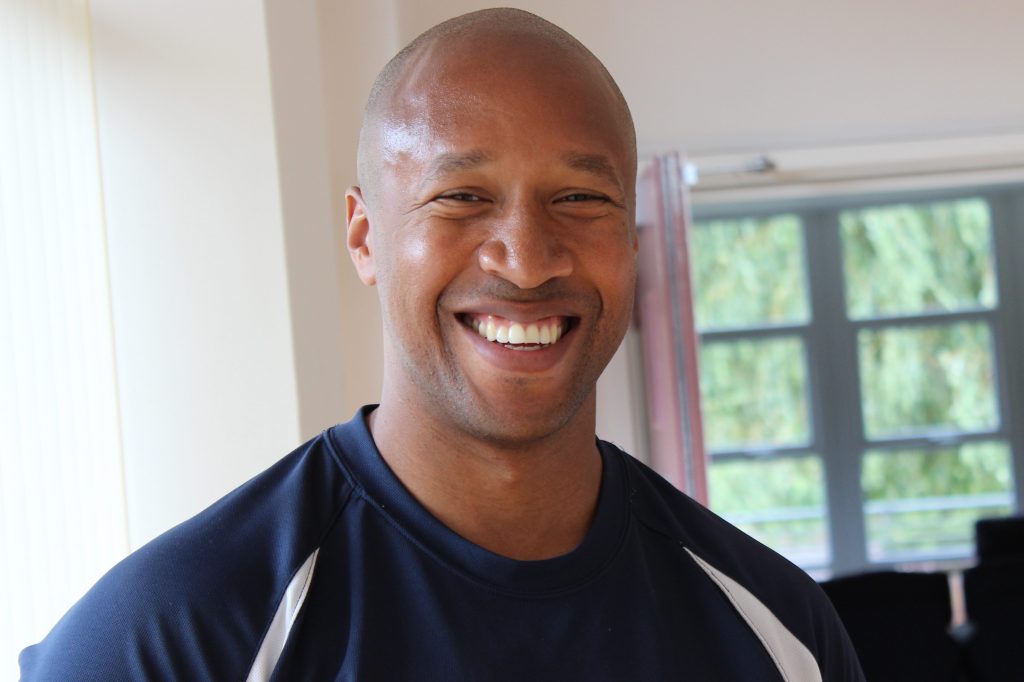 Daily training and staying fit was a way of life for firefighter Dean Pounder, but after suffering from sciatica  – pain caused by rubbing or pressing of the sciatic nerve  – in 2015 he was forced to adapt his tough daily regime to manage his condition. Dean, who now works for Tyne and Wear Fire Service, had spent 12 years serving with London Fire Brigade and was a competitor in London’s Fittest Firefighter before his condition worsened.

“They run the competition every year in Covent Garden,” he explains. “I train regularly but I hadn’t specifically trained for the London’s Fittest Firefighter, as I got roped in to help out and basically took part in the first four stations.  There are 12 stations and you go from one to the next as quickly as you can as it’s a timed event. There’s rowing, bench presses, knee raises and a part where you have to wear full fire kit head to feet.

He continued; “You have to bowl out a length of 70mm hose then set a standpipe into the hydrant and connect the 70mm hose to the hydrant. At the other end you have to tie a clove hitch to the branch of a hose reel followed by running up several flights of stairs before hauling aloft the length of hose reel. The course normally finishes off with a firefighter completing the rat run with a casualty (dummy). Finally you hit the red buzzer and that’s where it stops. I can’t remember the first four stations I took part in but low and behold we, our team managed to complete the course, without any training, well specifically myself.”

An extremely strenuous event, Dean didn’t falter as he is a very physically active person, always maintaining a high fitness level so when his illness struck he struggled to adapt to his new routine.

“The injury has affected both my work and home life. I have been off work now for 5 months and it’s not easy when you are used to being active. I have worked all my adult life and I went from being mobile and very physically active to – especially post-surgery – pretty much sofa bound. You have to rest, although at the same time they [Dean’s doctors] advised I walked every 20 minutes but keep it minimal. Home life has been very tough because I am not used to being at home. Sitting around at home you find that it can be stressful.”

It was around ten years ago that Dean first applied for support from the Charity to recover from a training injury after encouragement from a fellow colleague.

“I found out about The Fire Fighters Charity for the first time back in 2009 and that was when I suffered a training injury and ruptured my tendon. You see leaflets around the station but a lot of the time when it doesn’t affect you, you turn a blind eye to it. You know it’s there – but you just don’t know it’s there. One of my colleagues said Dean, ‘you know you have got The Fire Fighters Charity for the injury you have, its best that you see them, they are very good, they look after you and it’s a free service.’ So I knew the process and was very much looking forward to coming back and getting stuck in plus spending time at Jubilee House and meeting new people.”

Three and a half years ago Dean first suffered symptoms of sciatica with the symptoms progressively worsening.

He said; “I saw my GP and they assessed me and they said yes Dean, it’s sciatica. I had an MRI scan and was off work for 4-and-half months and then it got better, so I thought ok, this is good now. I took my pain medication and went to The Fire Fighters Charity centre – Harcombe House in Devon and they looked after me but two years later, the same symptoms returned, but more aggressive. I was signed off work and had an MRI scan again and it was revealed that the L5 and S1 spinal discs in my lower back had permeated so they recommended surgery. Now I am 12 weeks post-surgery and that’s the reason I visited Jubilee House after the Charity advised me to come between 10 and 14 weeks post-surgery so that I could benefit from the services they provide.”

Dean admitted that, with his injury causing him so much pain, it was a complete wake-up call in regards to the type of training he could manage  on his own and what was actually working ; “Just by training alone and what I normally do on a-day to-day basis it wasn’t going to solve or re-habilitate my injury.

“The programme that they prescribed me is not easy as it’s designed to make me work and to challenge me. It’s not so much as painful, but the rehabilitation they have given me is making my body feel that it’s not a standard exercise routine that I am used to, so it can be challenging and can be frustrating at times. I am normally used to being 100% active and fit all the time and now I am doing something where it is a challenge but it is aiding my ability to overcome my injury through these exercises they have given me.”

Having reached out for the extra support Dean is grateful for the time he spent at Jubilee House.

“The staff all know their stuff and are experienced professionals. Without them, and the whole Charity, I know that me personally, I would be doing something that I shouldn’t be doing to aid my injury as I only know so much. They basically say ‘Dean, this is what you need to be doing’ and I am just reading and going along.”

And taking his experiences home from his stay in Penrith, even Dean’s community has benefited.

“I implemented walks into my outdoor fitness routine and I got some of my neighbours in the community to join in with me and they benefited as I am a qualified personal trainer. I used that experience to help them but I also benefited from them proving me with company when I was bored.”

He added; “They have given me a programme I have learnt from and when I do go back to work – or even before I go back to work – I have the tools and programme that I can progress from so I know that when I do leave here there is still a path for me to continue, for me travel beyond and overcome these ailments that I have.”