Lisa Gregory was diagnosed with a rare autoimmune disease last year, restricting movement in her hands. However, she says our digital art therapy classes helped her discover a whole new life passion.

As the partner of a retained firefighter, Lisa Gregory had never known she was eligible for support from the Charity – but when she finally reached out, she says it was life-changing.

The mum-of-two, 48, got in touch after being diagnosed with cancer in 2019. While she overcame the cancer at the time, she suffered a rare complication and was diagnosed with an autoimmune disease called paraneoplastic syndrome shortly afterwards. While paraneoplastic syndrome can often improve once the cancer is gone, unfortunately Lisa’s is a rare case where it’s now a progressive disease and impacts her nerves, leading to deteriorating issues with her general movement, balance and neuropathy.

Following a visit to Jubilee House, however, Lisa says she’s been working through physio sessions – both digitally and face-to-face – which have hugely helped, as well as joining our digital art therapy meetings, allowing her to pursue a whole new passion she’d never considered before.

“The cancer is all treated and cured now, I had a mastectomy and I was given the all clear a year and a half ago, but I’ve been left with this disease now,” says Lisa. “It’s like 1 in a million, I always wanted to be special – just not that special! It looks like multiple sclerosis essentially. 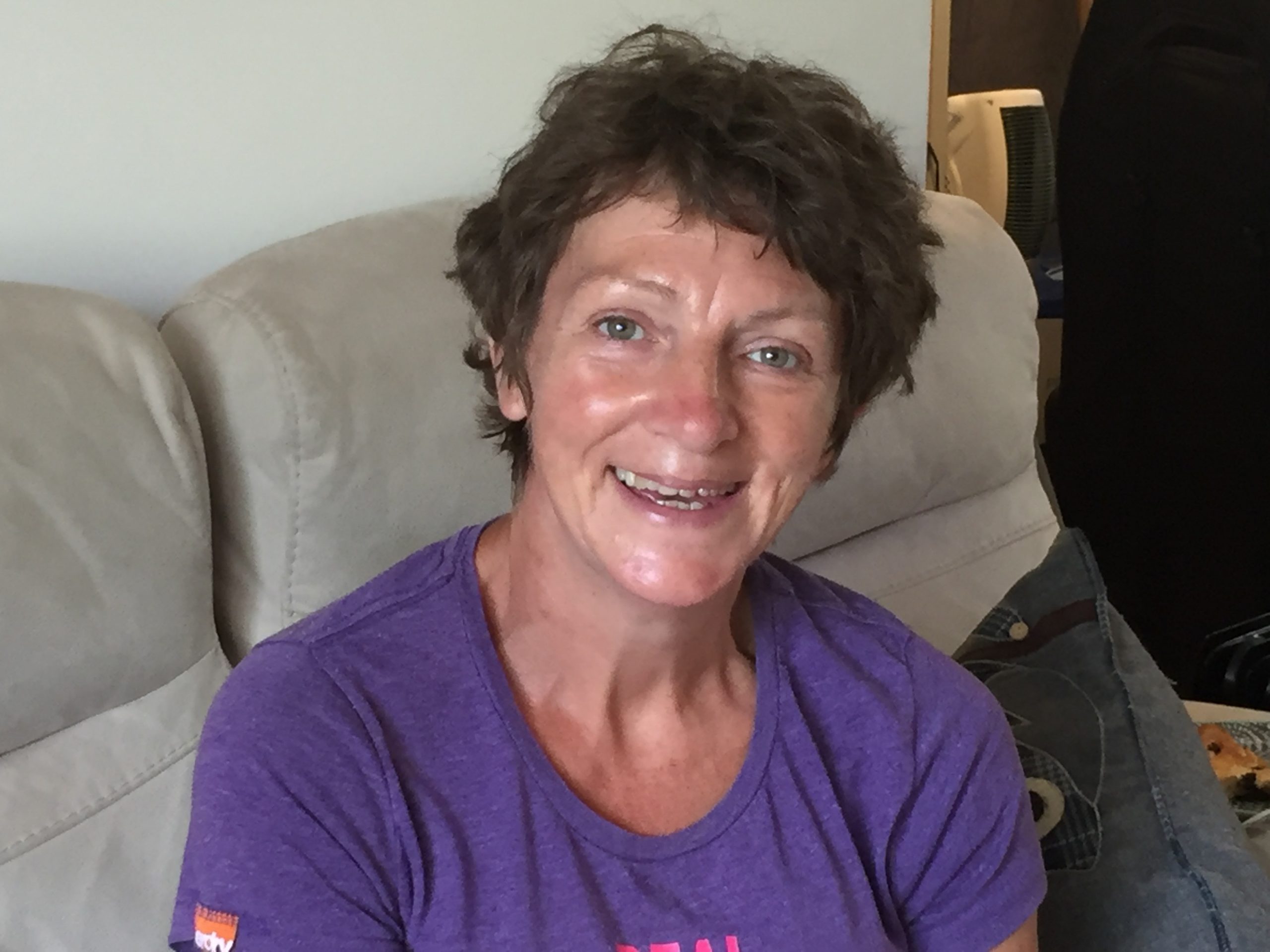 “Some people do get better when their cancer is treated, some people stop getting worse and some people – like me – continue to deteriorate.”

Lisa hadn’t considered contacting the Charity before, as she’d assumed it was only for fire and rescue service personnel, but when a friend of her partner, Simon, who’s retained with Surrey Fire and Rescue Service, let her know we supported spouses, partners and dependents too, she phoned in.

“I was so surprised when I found out more about the support. It was brilliant because I got in touch before lockdown and then when that happened, I was able to have video calls,” she adds. “The physio over those calls did improve things, it went really well and my walking did improve. Physio, so far, is the most effective therapy I’ve had. We’ve tried lots of things.

“The Charity then said I would benefit from going up to Jubilee House in Cumbria – they could offer more specialised support for me there and could assess my walking properly.”

Lisa visited the centre when it opened between lockdowns, and says while she was nervous at first, it ended up being “amazing”. 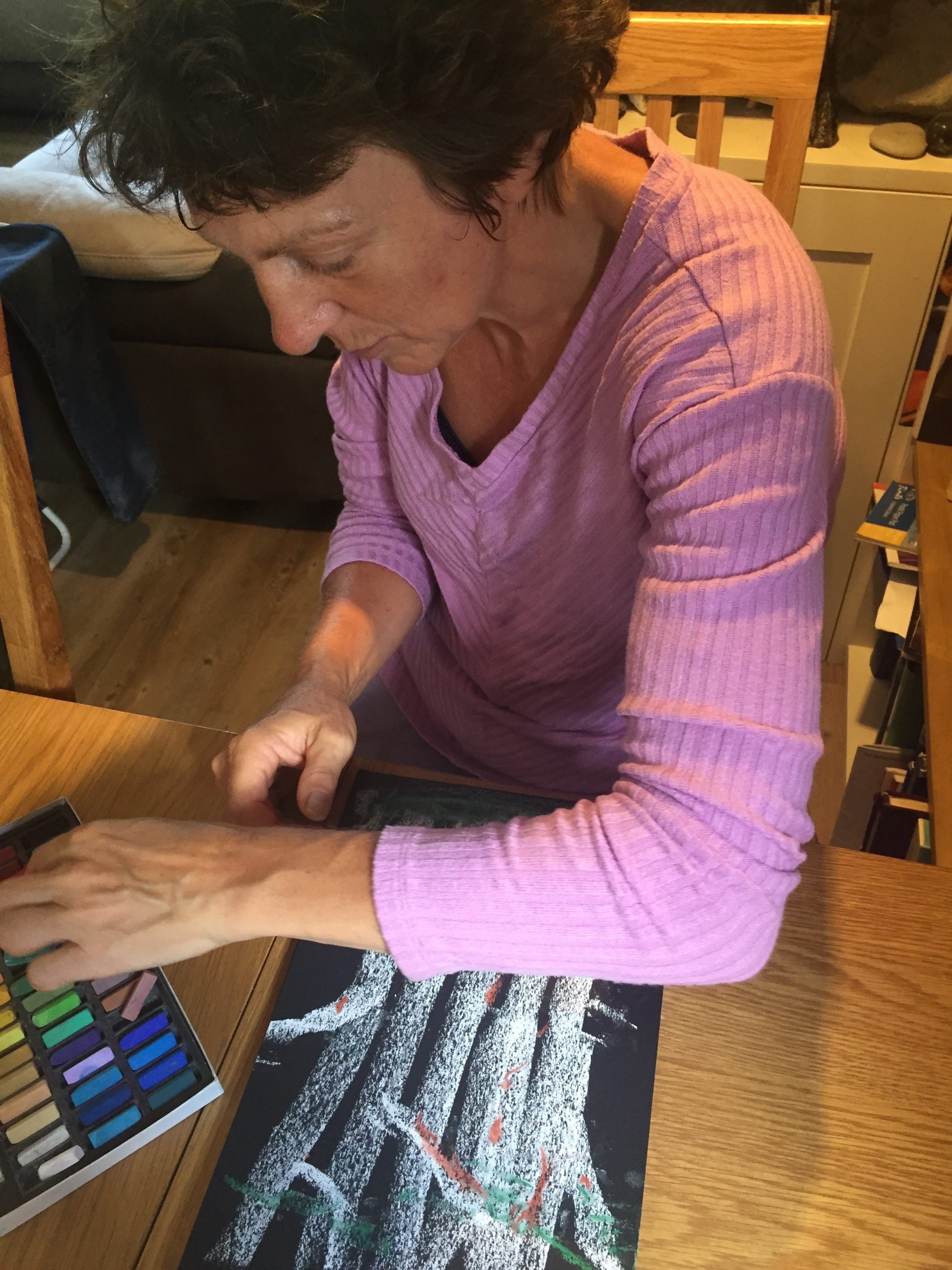 “I was also thinking fulltime fighters should be first in the queue, if there was to be a hierarchy, so I was very grateful for the spot!” Lisa says. “I have to say, the staff and firefighters there are all so lovely and welcoming. I was so, so lucky to be able to get there between the lockdowns. It was amazing to be able to have that level of physio and the hydrotherapy pool too.

“When you’re at the centre, you might be there primarily to get physio for you knee or your back or whatever, but actually the centre offers so much more. There are classes on things like mindfulness, nutrition, sleep and everything is scheduled into your day. They tackle more than just what’s physically wrong with you.”

Lisa worked for years as a scientist before her diagnosis but had to give up her work when the disease began impacting her nerves. Then, when the pandemic hit, she went from commuting daily and working with a big team to being stuck inside isolating, and home-schooling her kids, Daisy, 13, and Ollie, 15.

It meant when our nursing team got in touch with her after her stay at Jubilee, and mentioned some digital art therapy classes they were running, Lisa jumped at the chance to take some time out from day-to-day life to try something new. 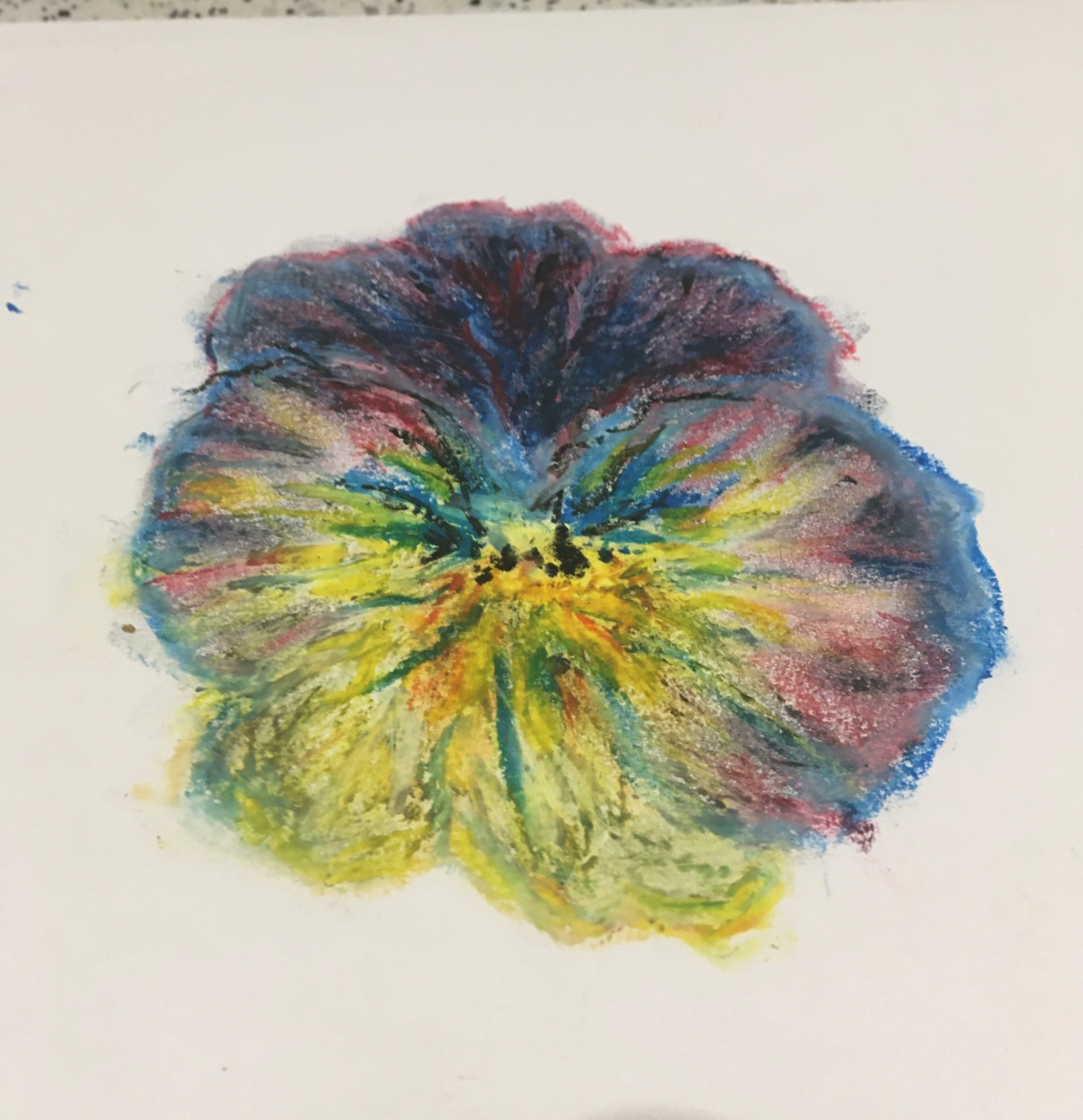 “I’d never done any art before, being a scientist, it’s completely opposite,” Lisa says. “The classes were brilliant, it was the first time I’d picked up a crayon and tried to do any kind of drawing at all, so I was a bit nervous about how it would go.

“Because of my neuropathy I can’t use my right hand at all, I’m right-handed, so I’ve had to become left-handed. I soon learnt that art therapy is not about producing a masterpiece though.

“My mum cried seeing me being able to use my hands like that. The things I created even look like how they’re meant to! Losing mobility in my hands and still managing to create – discovering this new thing for me – it was quite profound, amazing… I might have lost somethings that I’d been able to do, but to find new things now… these things might always have been there but I’d never had time to explore them.”

The classes were also a way of Lisa meeting her people, many of whom were struggling with illnesses or injuries of their own. 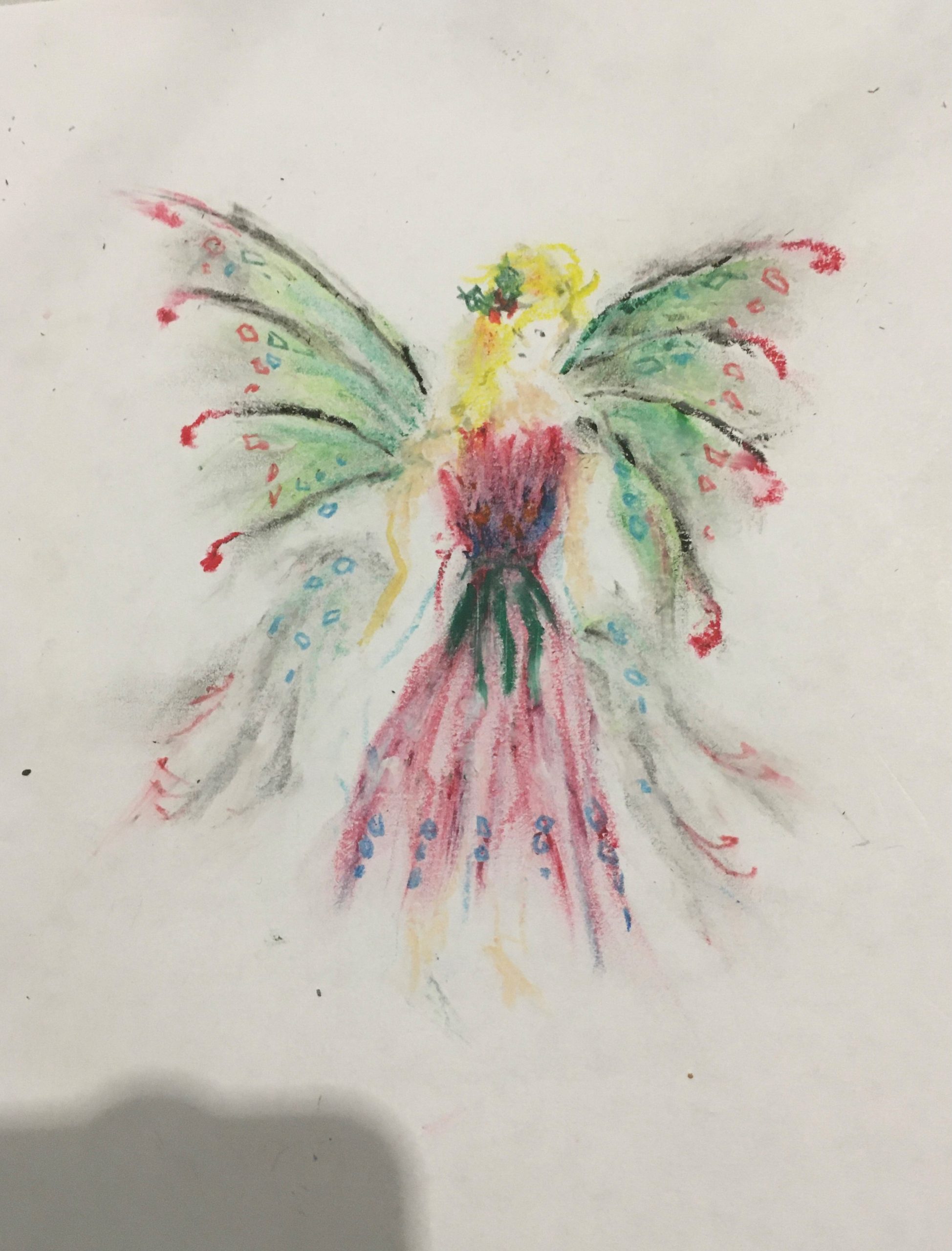 “I used to manage a group of about 20 people so having always been surrounded by people to then be not working and at home, in lockdown, shielding and not able to get out, just seeing people was nice,” she adds. “I was sat there forever shielding… How I have any mental health left at all is amazing. It’s not just being isolated from friends, it’s little things like being able to go to the shop or cashier. You’re stuck in the house with two kids trying to do home learning!

“The sessions were something I’d signed up to do, so you were almost giving yourself permission to have an hour off. You could do anything, I was trying out pastels and things from my son’s GCSE art kit, then there was a guy doing something with models and another lady was making Christmas decorations.

“We’d have a chat beforehand and talk about how we were feeling and then we’d get on with what we were doing. We fell into a comfortable silence for 20 minutes, before reconvening, and that was really nice – you could really absorb yourself in what you’re doing.

“You know as much as I am an optimist, and I am, it’s just nice to be able to talk out loud to somebody you don’t know, but also meet people going through similar types of things.”

“I discovered all these things about being reflective, trying to be mindful of things rather than just cross things off a to-do list.”

The art wasn’t just an escape for Lisa, however, and she says the classes have also helped with her physiotherapy in her hands.

“We’d all assumed I wouldn’t be able to do it, so it was a great surprise,” Lisa says. “I plan to continue with the art, it’s about taking that bit of time for yourself and losing yourself in something completely different.

“It’s a progressive disease I’ve got, so it’s a lot to get my head around. But all the exercises I’m doing, I believe are helping to slow it. I still take positives, I still carry on.

“Self-care is something I’d never done, my job was stressful, I worked very long hours, then I’d come home and carry on working after dinner. Taking time for myself, that in itself is a change of life – to say this is ‘you time’ and you’re allowed ‘you time’. I discovered all these things about being reflective, trying to be mindful of things rather than just cross things off a to-do list.”

While Lisa hasn’t accessed support from our psych team so far, as she’s feeling optimistic about the physio and art classes she’s been taking, she says it’s a reassurance knowing it’s there for her, should she need it in the future.

“At least at the moment I feel I am taking it in my stride, coping, managing,” she says. “Currently I feel I don’t need that side but I could always do so in the future, especially if things get worse and I can’t do things for myself. As an independent person that would be a disaster, so it’s good to know the support is there.”

If something is affecting your physical or mental health, get in touch with us. Call our Support Line on 0800 389 8820 or make an enquiry online.