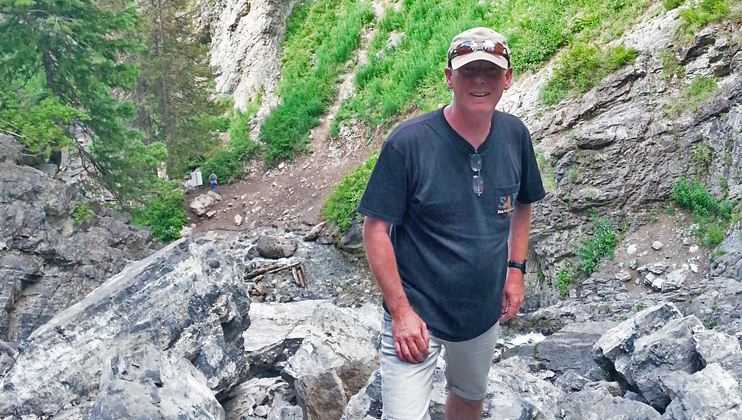 Having been diagnosed with a life-changing and debilitating medical condition when he was only 40, Stephen Kyle understands the complex relationship between physical and mental health. The Scottish Fire and Rescue Firefighter turned Watch Manager shares his story.

If anyone knows the isolating effects of living with a long-term medical condition, it’s Stephen Kyle.

For 14 years the now-Watch Manager at Easterhouse Fire Station has lived with adult onset Still’s disease, a rare degenerative condition that causes your body’s immune system to attack all its major organs.

So rare is the condition, that when Stephen first got ill, his doctors had no idea what was wrong with him, or why his organs were shutting down: “It was very scary at the time,” he says. “I spent three weeks in hospital, and while it was clear I was seriously ill, no one knew why. Eventually I was told I’ve got this illness, and that it’s a chronic condition that will always be with me. And that was it.”

After  taking six months sick leave, Stephen returned to work, trying to adjust to the limitations of his condition: “I was on light duties and would get so frustrated that I couldn’t do the things I’d always done, both at work and at home. I’d been a keen motorcyclist and liked to tinker with bikes and other bits of DIY at home, but I couldn’t do any of it. I’d have flare-ups that would last 3-4 weeks, where I’d feel incredibly sore and couldn’t get out of bed. I was really struggling.”

“It took its toll on me mentally, which I hadn’t seen coming. I wasn’t a nice person to know.”

Aged only 40 at the time, and having spent the best part of 14 years as a healthy firefighter, Stephen was looking at a different future to one he had envisioned for himself. He found he couldn’t walk the length of his house without breaking into a sweat, and spent that first summer indoors while his wife and children enjoyed the nice weather.

“It took its toll on me mentally, which I hadn’t seen coming,” he says. “I found myself snapping at my kids and wife for no good reason, and would blow up over the smallest things. I wasn’t a nice person to know. I was becoming more and more withdrawn and not wanting to do anything. I was missing the camaraderie of station life; they came to visit me in intensive care, but once I’d gotten out of the woods, people went back to their lives and I was left to deal with it. I had no visible signs of disability, and it was hard to explain what was going on. I just didn’t know who to turn to.”

Stephen applied for help from The Fire Fighters Charity and was offered a stay at Jubilee House, our centre in Penrith.

“It wasn’t long after I’d gone back to work when I went to Penrith, but I was still feeling really sore,” he explains. “They were shocked when they realised how weak I secretly was, because I was doing such a good job at hiding it. The physio couldn’t believe I was still on the run, but I said aye, I am. She said, ‘but you have no strength,’ and I said, aye, I know.”

The team at Jubilee House created a personalised programme to gently ease Stephen back into fitness, while being sensitive to the fact his condition was so rare: “It’s not like a broken leg, where they were on familiar ground. You’re dealing with an illness with no cure, which not a lot of people have ever heard of, not to mention the fact that the medication has a whole heap of side effects. But they were brilliant.”

“The physio couldn’t believe I was still on the run, but I said aye, I am. She said, ‘but you have no strength,’ and I said, aye, I know.”

During his programme, Stephen was offered a one-to-one psychological session, which he accepted. It was here where all of his pent-up frustration, anxieties and worries came out, including events that had happened during his fire career that he had not realised were still causing him issues.

“She was so empathetic and put me completely at ease, helping me find coping strategies,” he says. “I came away from my two weeks at Penrith in a better frame of body and mind.”

Having realised he could not carry on as a firefighter, Stephen applied for a promotion, which he secured, becoming a watch commander at his old station. But last year, life delivered him another difficult blow, when his mother passed away after a short illness.

“I know a lot of people go through it, but that doesn’t make it any easier to lose someone you love,” he says. “What with the pressures of work, the worries of my mum, and dealing with all the arrangements after her death, my illness flared up really badly again. I felt as if I was in limbo and couldn’t go anywhere.”

“He told me to imagine my brain as being like a work bench. All the tools I needed to recover were there, but I couldn’t see them because my workbench had become cluttered. He said, let’s clear out the clutter, so you can focus on the tools.”

Stephen once more reached out to the Charity, and was offered a visit to Harcombe House last November, where he spent time in conversation with Psychological Therapist David. “We talked about all sorts of things, like my childhood, my career with the navy, my illness and my time with the fire service,” he says. “David said something to me that I’ve never forgotten. He told me to imagine my brain as being like a work bench. All the tools I needed to recover were there, but I couldn’t see them because my workbench had become cluttered. He said, let’s clear out the clutter, so you can focus on the tools. I could see exactly where he was coming from, especially as DIY is such a hobby of mine.”

As time went on, Stephen learned to accept his illness, and the complicated relationship between his own physical and mental health: “I realised that not feeling right in your head means your body doesn’t feel right either, and vice versa. There will still be days where I feel sore and painful, and the emotions that go with that, but I’ve realised it’s about learning to accept this, and asking why I feel that way. If I can do something to change it that will help, great, I’ll do it. But if not, I’ll let it run. It’s made me feel better, learning to live with my illness, rather than fight it. I’d been pushing it away for so long, but that did me no good. Now if I get tired or don’t feel up to something, I will walk away, knowing I can walk back when I feel better.”

Having grown up in a generation where men were less encouraged to discuss their emotions than women, Stephen has felt particularly surprised at how open he has become to it: “I will give into my emotions now, which is absolutely fine. If I’m feeling sad, angry or frustrated, I will share it with my wife and she can deal with it. She’s gone through my illness as well, and after 29 years of marriage, there’s no one who knows me better.”

Stephen says he doesn’t like to think where he would be without The Fire Fighters Charity’s help: “I think I’d be in a bad place, to tell you the truth. But things are ticking along nicely, I’ve been working as a watch manager for 10 years this March and looking forward to my retirement when it comes, rather than having been pensioned off when I first got ill.

“It’s made me feel better, learning to live with my illness, rather than fight it. I’d been pushing it away for so long, but that did me no good.”

“That’s the thing about the people at Harcombe and Jubilee; they’re all working towards a common goal, which is to get you back to where you should be. The people at Penrith set me back on the road, and those at Harcombe showed me how to walk it.” 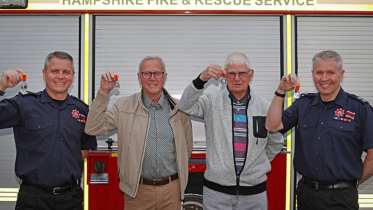 Steve: “On-call firefighting runs in our family – your donations have helped us through hard times”

Phil: “We’re always looking after other people – it’s rare we’re looked after ourselves”