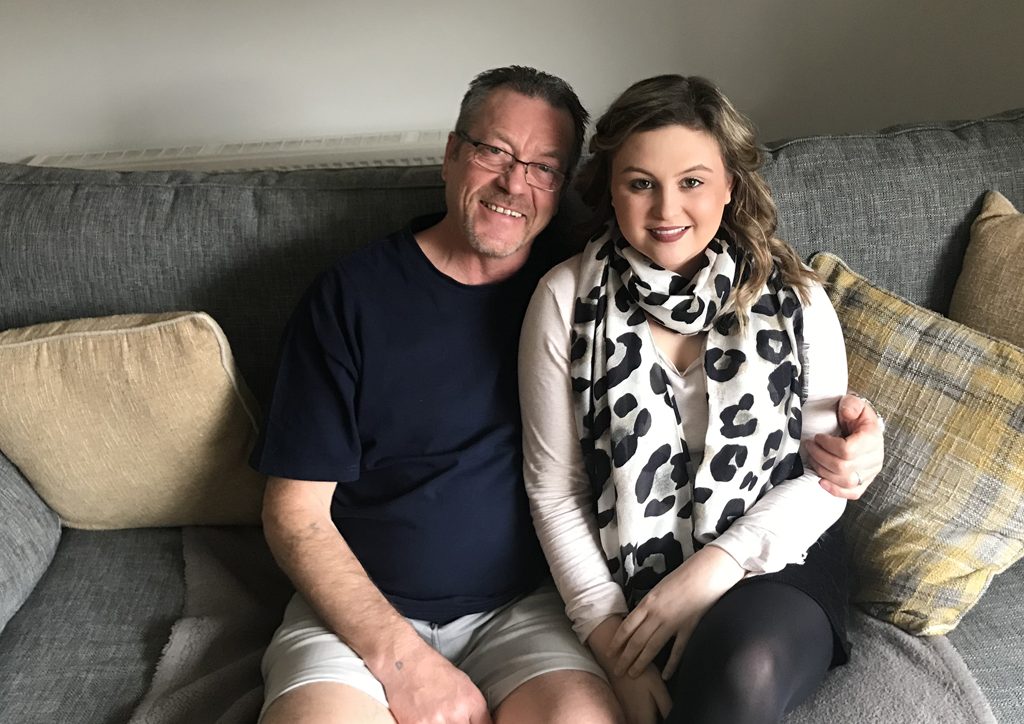 A little-known relaxation method helped Tayla Marshall combat the crippling the anxiety that had all but taken over her life. And she learned it during a visit to Jubilee House.

Firefighters are well known for their natural instinct to want to save someone in trouble. So when retired Corby firefighter Dave Scholfield saw his step-daughter struggling, he knew he would go to whatever lengths necessary to get her the help she needed. The combination of living with chronic pain from endometriosis and relationship breakdowns with both an ex-boyfriend and her father had led to Tayla finding herself in a ‘dark place’.

“Everything had spiralled out of control and I’d been signed off work sick,” she says. “I’d lost friends by constantly cancelling plans last-minute due to feeling anxious, and a lot of them just didn’t understand. The doctor had put me on medication, but I wasn’t getting better. I was close to the edge, I didn’t want to be here and was just in such a bad place. I think that’s what woke up my step-dad, watching me go through it all. He wanted to help, and as he’d been up to Jubilee House himself, he knew it would do me good.”

“I was close to the edge, I didn’t want to be here and was just in such a bad place”

“She was in need and I had to fight for her, so I phoned up and explained I couldn’t stand by and watch her get worse,” says Dave. “I’ve been to Jubilee House myself both for psychological support and recovery after spinal surgery, and I knew that if I could just get her there, it would help.”

In October 2017, then-22-year-old Tayla was invited to spend a week in Jubilee House, our residential centre in Penrith, Cumbria. It was the first time she had left the house properly in eight months, so she felt understandably nervous about stepping so far outside her comfort zone.

“It was daunting at first and I felt very anxious before going, but everyone there was absolutely amazing,” she says. “We’d all chat and laugh, and they made me feel so comfortable, despite the fact I hadn’t been in the fire service myself. No one asked questions about why I was there, I just felt part of a big family, which was a huge part of my healing process.”

Tayla spoke to one of the psychological therapists about everything she was feeling, and, for the first time in her life, she says she felt like she was listened to by someone who understood.

“I’d had counselling when my parents had divorced when I was in my early teens, but I’d always found it really patronising and like I wasn’t properly listened to,” she says. “At Jubilee House, we talked about all sorts of things, and looked at different ways to try and help me cope.”

After three days of trying different calming methods, including mediation, breathing and imagination exercises, the pair had a eureka moment.

“I couldn’t believe it,” says Tayla. “She showed me how to use pressure points on your fingers to relax, which has a similar reaction to acupuncture or reflexology. You rub your thumb along your knuckles, each part of which triggers a feeling in your body, reminding you where you are. This brings you down to earth during periods of anxiety and helps you focus on your breathing.”

Using this technique, Tayla found herself able to talk about things she had been bottling up for years: “I could talk about deeper things that I’d never talked about, and rather than getting stuck in the past and upset, I’d run my knuckles to bring me back to where I was. It was absolutely amazing.”

“If you’re prepared to open up and listen, and take on board what they say, it can change your life. It certainly changed hers.”

Tayla also spent time with physiotherapists, who devised exercises suitable for her condition, taking time to establish what she could and couldn’t do. “Combined with the psychological support, I couldn’t believe how everything felt tailored to me,” she says. “I came back a different person, like this massive weight had been lifted off my shoulders.”

Upon returning home from her week at Jubilee House, Tayla’s family saw an instant change in her.

“She was so much more upbeat, like a lot of the monsters that were dragging her down had now been put to bed,” says Dave. “She’d been given a new direction, and a new start.” 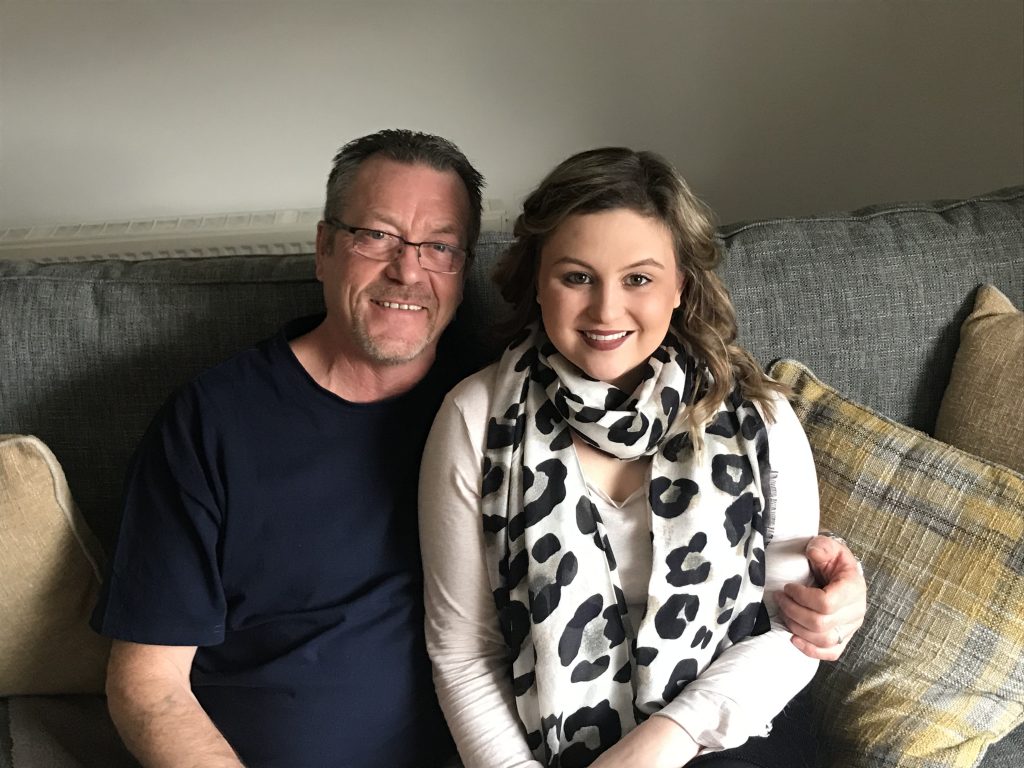 Nearly 18 months since her visit, Tayla says she is in a much better place. Having returned back to work upon her return from Penrith, she used the techniques she had learned to help her stay calm when feelings of anxiety crept up on her. For her recent birthday, she held a fundraiser for the Charity as a way of saying thank you. And then, just before Christmas, she found herself tackling something she never would have thought possible.

“I wrote a letter to my dad, saying everything I wanted to say to him to get it all off my chest, and then I burned it,” she says. “It was something that had been suggested to me while I was in Penrith, to do when I felt ready. He’d sent me a Christmas card, and I sat down and talked about it with my step-dad, and we agreed it was the right time to let go of all these feelings I’d been holding onto for so long.”

For Dave, seeing the Charity that had supported him so much throughout his career now support his step-daughter, means more than words can say. “We will continue to support The Fire Fighters Charity in any way that we can,” he says. “It’s a place that is dear to my heart, and I don’t know of anyone who has been there who haven’t felt better as a result. It did her the world of good, but that’s what they do; if you’re prepared to open up and listen, and take on board what they say, it can change your life. It certainly changed hers.” 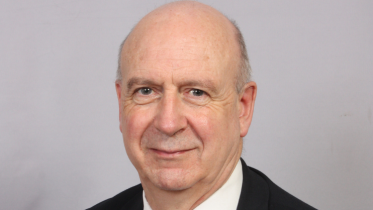 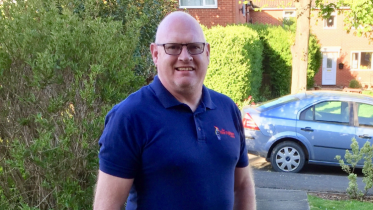 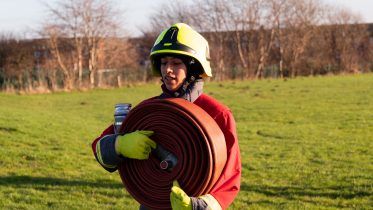 Uroosa: “Being the first Hijabi firefighter in the UK is inspiring other women”