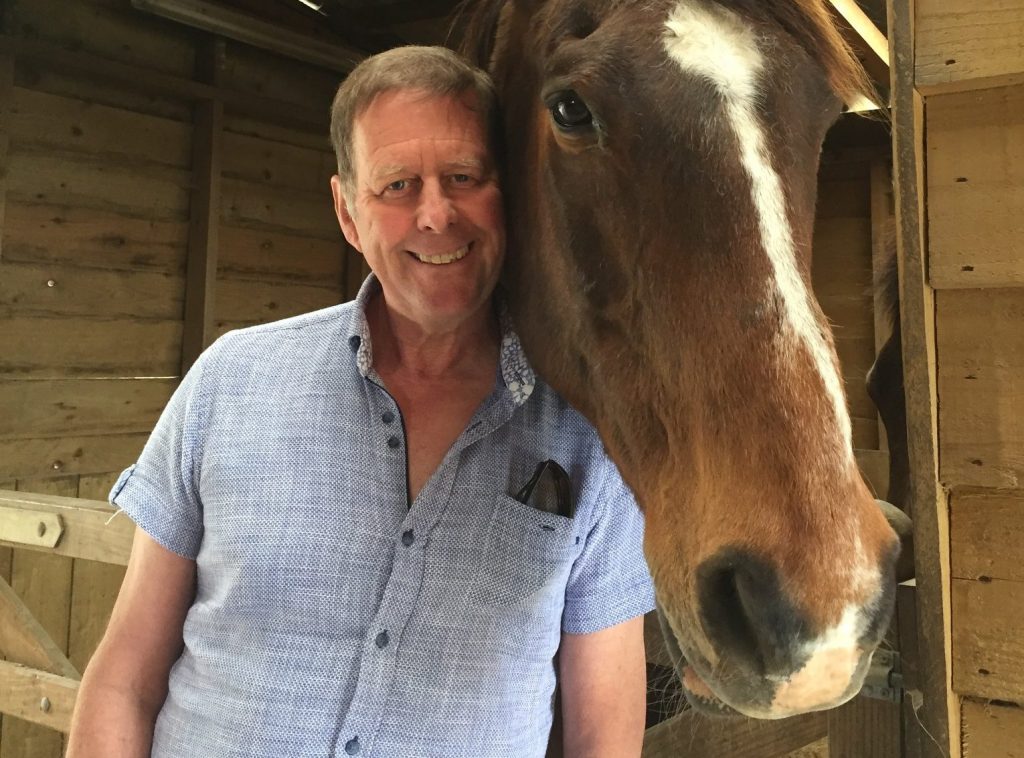 After 20 years in the fire service, Ian Richards says he was burnt out. But time spent with The Fire Fighters Charity helped him find the strength within himself to realise a life-long dream. And now he spends his days enjoying the peace and serenity of a small plot of land in the south of France.

When we speak with Ian Richards to hear his story of the support he received from the Charity, he is sitting in his French gîte overlooking his plot of land in the Dordogne, having just got in from feeding the goats and tending to his vegetable patch. His life now is a far cry from the 18 years he spent working in the fire service. And he says it was his time with The Fire Fighters Charity that helped him to find the bravery to realise his life-long dream.

“I could never have imagined this life for myself when I was a senior fire officer,” he says. “At one point I was a heart attack waiting to happen; I didn’t think I’d see retirement, let alone this life. But I came away from my time with the Charity with the confidence to live the life I wanted. And my wife and I have made it happen.” 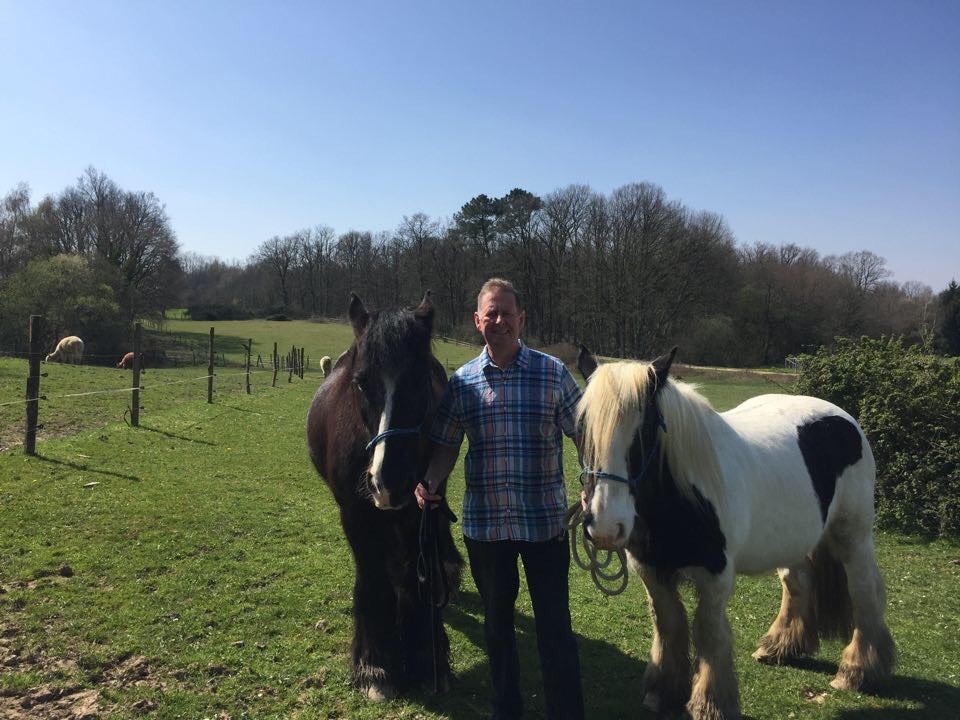 Ian joined Devon Fire and Rescue Service in 1989, initially as a retained firefighter, before going wholetime a few years later. He transferred to Berkshire for a while before coming back to Devon. He worked his way up through the ranks, moving from a firefighter to a station commander before becoming divisional officer for Devon. He was an active member of the whole fire community, sitting on numerous committees, acting as a fire investigator and vice president of the National Fire Officers Association. After nearly 20 years in the brigade, he says, he was burnt out.

“I was stressed,” he says. “I had a few weeks off and was offered a course of CBT, but I didn’t really get on with it so didn’t carry it through. I went to my Chief and agreed to take a year’s unpaid leave so I could go to Scotland to live with my then-girlfriend (now wife). She had bought a 200-year old farm house near Loch Lomand that she was starting a guesthouse in, so I went up to help.”

Ian says that year flew by and he realised he didn’t want to go back to his career, so after 18 years in the fire service, he left altogether in 2007. And that’s when his troubles started.

“At one point I was a heart attack waiting to happen; I didn’t think I’d see retirement, let alone this life.”

“I started getting really bad nightmares and feeling incredibly angry over the smallest things,” he says. “A few years earlier I could calmly run an incident with 150 people and deal with the trauma. And now here I am, throwing the toaster across the room because it had burnt my breakfast. I was so angry. But I was in denial that anything was wrong. So I waited years before I realised I needed to get help. Now looking back, I can’t believe I waited so long to call the Charity. It’s the thing I always say. Why did I wait so long?!”

In the autumn of 2014, when things got particularly bad, Ian reached out to an old Welfare colleague in the brigade: “I said I’m in trouble and I need help. She said be at your phone at 8pm, someone will ring you. When they did, I explained what had been going on. They said from now on, The Fire Fighters Charity will be helping you. They sent me a referral and I got a letter inviting me for a stay in Penrith. From that minute, I just knew everything was going to be okay.”

Ian came to Jubilee House, our residential centre in Cumbria in February 2015: “I didn’t know what to expect, but from the moment I walked in, I had never felt so welcome,” he says. “It was like they were saying, you’ve spent your career looking after others, now we’re looking after you. I viewed it as my last chance to get sorted and thought whatever would be would be.”

He says having spent so many years fundraising for the Charity during his career, he was determined to put in as much as he could in order to get out as much as possible.

“I was so respectful of the Charity and so grateful to be there, so I didn’t want to waste their time or mine.”

“I was so respectful of the Charity and so grateful to be there, so I didn’t want to waste their time or mine. I told the therapist I spoke to that she would get as much of me as I could give. I preempted my faults, telling her I might deflect things with humour or tell a lie to make things sound better. But I made a verbal contract with her not to let me. I told her I was trusting her so she would get the most out of me and vice versa. And by the end of that two weeks I had talked through things I had kept suppressed for 25 years. But I was worried, because I felt even more vulnerable for having opened up, like we hadn’t fully done everything. So they invited me to come back in November.

“It was almost harder coming back the second time, because I knew I was going to be facing into some areas of myself that wouldn’t be comfortable. And I don’t want to put anyone off from applying, but I didn’t just cry in that room, I sobbed. But those tears were important, because by the end, they’d given me hope. I understood things a lot more. I’d felt like I wasn’t a good person and realised I’d carried a lot of guilt about leaving the fire service, like I was letting people down. But I started be able to look in the mirror and see a good person again. The therapist also gave me coping mechanisms and introduced me to mindfulness. I’d never heard of breathing exercises before, but they’ve been incredibly helpful. I used to have nightmares all the time. Now I might have three in a year, if that.”

One of the biggest discoveries Ian said he made at the centre was the strength within himself to go after what he really wanted from life. “I’d always loved animals and being outdoors, and Deb and I had talked about maybe moving abroad for a long time. Fast forward a few years, and a few bumps along the road, and we now have a little business in France. We bought a smallholding where we keep rescued, broken animals and give them a home, as well as having two holiday cottages.”

“In our 30 acres of land and 5 acres of woodland, we have two Irish cob horses, two Shetland ponies, two rabbits, a feral cat that found us and gave birth to kittens, three goats who were due to be shot and another who’d been abandoned in a field when his owners sold their house, Scottish terriers, ten hens and three alpacas. There’s a family of owls in our roof, and right now I can see a kestrel on the telegraph pole. I’ve become vegetarian, practise yoga and Pilates, and every morning I get up and feed the goats as the sun comes up. It’s my spirituality, being this close to nature, being present in each moment. I feel glad every single day. It’s just a little oasis of calm, and we worked hard for it.”

“I wish I hadn’t waited so long to get help. It was like I’d got on a train with no idea of where I was going or how long I’d be on it, each day I’d just let it carry me further and further away. I’d always imagined that my time at the Charity would drop me at the destination, and that would be it, fixed. But actually, it’s not about being totally cured, that’s not how it works. I left you with hope, courage and determination. I got off that metaphorical train with big, confident steps, and discovered I was walking myself to my next adventure, equipped with the tools to cope.”

“So this is me living my dream. I went to The Fire Fighters Charity when I was broken, crying like I’ve never cried before, and I left with hope. Just a few years later, I’m living the life I’d always dreamed of, thanks to you guys. If you’d have told me when I was working as a senior fire officer at 100mph and never stopped to breathe that in my 50s I’d be living in France and would have chickens in my back garden or own a pony and trap, I would have laughed in your face. But here I am. I’ve been given the luxury of time to appreciate things more, thanks to the work I put into myself while I was with the Charity. I think that bravery was always there inside of me, but you brought it out of me.”

If you’re struggling with something that is affecting you mental wellbeing, don’t suffer in silence, let us help. Call our Support Line on 0800 389 8820, browse our health and wellbeing library or make an enquiry online.

While we’ve got you here

We can’t be there for people like Ian without people like you. Every year our amazing supporters, donors and fundraisers come together to raise the £10m we need to operate our services in support of the entire UK fire services community.