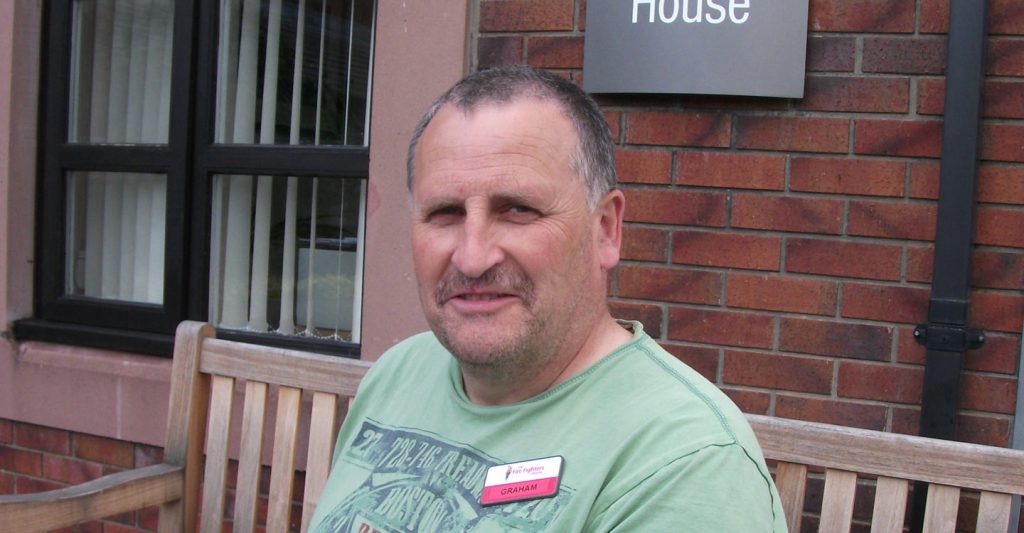 A career firefighter who was paralysed following the removal of a tumour on his spine, Graham Murray was helped at home by the Charity.

Retired firefighter Graham Murray from Bangor in Northern Ireland has been accessing the Charity’s community-based services for the last few years.

Graham was in the fire service for more than 20 years. He started as an apprentice and went from firefighter to leading firefighter to sub-officer in the year 2000. In 2005 an incident on a shout resulted in back pain and neurological symptoms which, after further examination, saw Graham diagnosed with a tumour around his spinal cord that was squeezing the anterior artery supplying blood to the head.

An operation to remove the tumour followed, but Graham was left paralysed from the hips down.

“The help that the Charity has given me has been life changing. There are no other words for it.”
Graham Murray

Graham was eventually passed the details of the Charity by a colleague and urged to get in touch to see if it could help with some of the challenges he was facing. Graham explains: “The driveway was a little worse for wear and one day spat me out of my wheelchair and onto the pavement,” explains Gordon. “So that’s how it started. I got in touch and they helped me get the driveway done. Then the regional representative for the Charity came and visited. He advised that a ramp should be installed outside the backdoor, because if the front door was blocked there was no-way of getting out. So they did the back ramp for me.”

Last July Graham also travelled to Jubilee House to attend a week’s rehabilitation; “I really enjoyed it, as it helps me with my back pain. I would definitely say life would be very different if I hadn’t had help from the Charity. I would be miserable. I have the freedom to do things in my own home now. I am always on my feet in my dreams and, because of the help of the Charity, that is how I feel.”