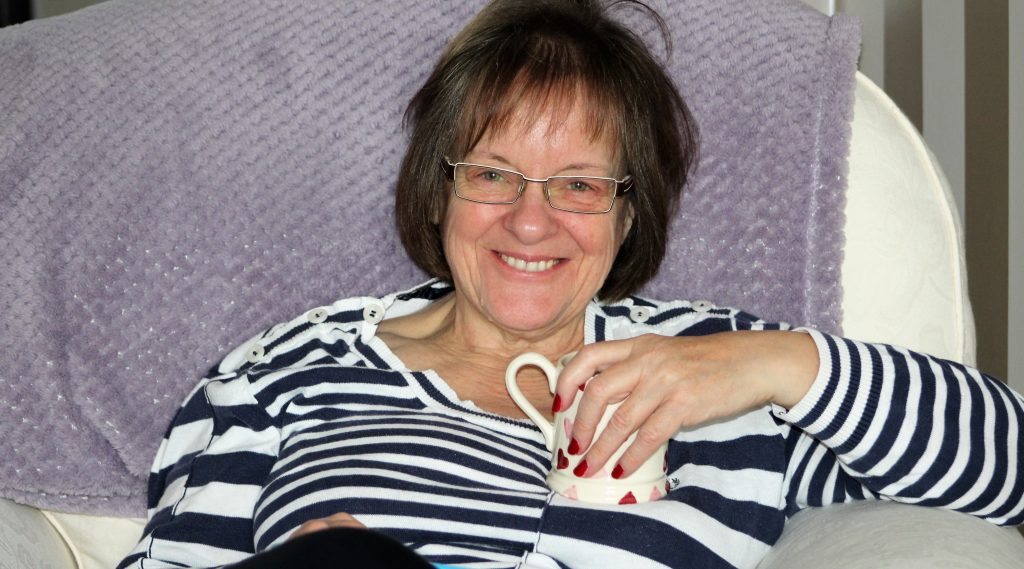 Linda Alcock thought she would never be able to walk again after neurosurgery left her unable to lift her chin off her chest without intense pain. She said all she wanted was to be able to see planes in the sky. Now, thanks to the care and support she received at Jubilee House, she is able to see the stars.

When Linda Alcock became ill in 2010, doctors initially thought she had an autoimmune disease. She was sent to a Rheumatologist, who struggled to diagnose the problem. After making an offhand comment about her memory having gotten worse since having to leave the job she loved at a local authority, Linda was immediately sent for an MRI scan. Later that week she received a phone call from the consultant to say she had a rare brain condition called ‘Chiari Malformation’, which it turned out she has had since birth.

“I was extremely surprised to say the least,” says Linda. “It basically means my skull was not large enough for my brain, which causes intense pressure on the brain stem and causes multiple problems. It was no wonder I had been in so much pain, and I was shocked to realise how fortunate I am that I’d only experienced symptoms in my late forties.”

Linda had to have neurosurgery to ‘make more room’, with surgeons attempting a decompression in May 2011. Unfortunately, the surgery was unsuccessful, and has left Linda with five problems as a result, including trouble walking. A consultant explained that if she had only one problem, they may be able to tackle, but it would be too dangerous to fix because there were so many issues caused.

It was a difficult and upsetting time for Linda and her husband, Bill, a retired Staffordshire firefighter.

While out for a walk, they bumped into one of Bill’s former colleagues, who told them to approach the Charity to see if they could ‘sort me out’.

“I just thought, impossible,” says Linda. “If the neurosurgeon can’t do it, nobody can. Whenever we saw our friend, he’d ask if I put in an application to the Charity but I just didn’t think they could help me. But then one day, things were so bad, I looked up the Charity properly, and saw that Jubilee House had a nursing team. Not only that, but their physios specialised in neurological conditions. So I thought why not?”

Linda sent in an application and was accepted in October 2013, making her way to Jubilee House, our residential centre in Penrith: “I had a wonderful time. The nurses and physios (especially Louise) were amazing, taking time to work with my problems and things had improved by the time I left.”

Linda was disappointed to be told that an MRI scan she’d had shortly before going to Jubilee House revealed a cyst on her spine, which would result in paralysis if surgeons didn’t operate. After numerous scans and tests, in January 2014, she underwent further surgery to try and correct all five problems she was living with.

“After that surgery, unfortunately I was very ill with meningitis and had to be admitted back to the ward twice,” says Linda. “I had developed hydrocephalus – sometimes called water on the brain – for which there is no cure. I was in hospital for a number of weeks until it was decided I needed a shunt in my brain, which would move the fluid into my abdomen.

“All I could say to the ward staff was just get me well enough to get back to Jubilee and I’ll be okay,” she says. “Yes Linda we know, they used to say.”

During this time Bill contacted the Charity to inform us what was happening. By the time she came out of hospital, Linda needed a wheelchair, and was unable to walk as she would experienced intense dizziness if she raised her chin up from her chest. Determined to make it back to Jubilee House, she was offered a return visit in May that year.

“The journey there was a struggle, but once I was there, I never looked back,” says Linda. “I was looked after by the amazing nursing team and was introduced to another brilliant physio, Laura, who knew exactly what to do with me. She gave me some exercises called Cawthorne Cooksey for my vision and worked with me on my balance and strengthening my neck where muscles had been cut twice.”

Not convinced these exercises would help her, Linda was determined to give them a serious try once she got home for the ‘wonderful people at Jubilee House who had given me their time and attention’, despite how tough she found them. Little by little, she began to notice improvements.

“Each time I went back, they’d ask what they could do for me,” says Linda. “One time I told Laura I didn’t think she’d be able to help with my latest problem, which was the shunt tube jabbing me in the tummy as I walked. The next day she came back with a plan to walk with some special poles that help my posture. Amazingly, I’ve never felt that pain since.

“My target was to be able to look up at planes in the sky. It took a long time, but now my neck is strong enough that I can even look up to the stars. It never ceases to amaze me.”

After putting in the work with her exercises, Linda even managed to be able to get her driving license back: “How amazing is that?” she says. “I’m so grateful to Jubilee House, and always will be.”

During one of her visits to the centre, Linda was visited by her daughter and grandson, Cameron, then aged 11. He saw posters at the centre about supporting the Charity, and said he would like to do something to give back.

“Having seen an advert for the Great North Swim, he decided that he’d like to do that to raise funds for the Charity. The following year, now aged 12, helped by the wonderful Alan Knell (one of the Charity’s Regional Fundraisers) and Cheshire Fire and Rescue Service, he completed the swim in Lake Windermere in 2015 and raised just under £3,000. I can’t tell you how immensely proud of him I am. And then in 2016 his mum made me doubly proud when she ran the London Marathon to raise even more funds for the Charity.”

By November 2016, Linda had progressed so well she now regularly goes for five mile walks, supported by the poles she was given at Jubilee House.

“I have achieved all I was aiming for and it’s all thanks to the skills, care and wonderful welcome I have continued to receive from all members of staff at Jubilee House,” she says. “During the last year, I have also been fortunate to access the Psychological Services there, after developing anxiety from being diagnosed with a rare kidney disease. This too has helped me immensely. Jubilee House is an amazing, enabling, safe and caring environment.

“I can’t believe how fortunate I am to be able to access these services and will be forever grateful to the Charity, the wonderful staff and everyone who raises the funds to make such a wonderful service possible.” 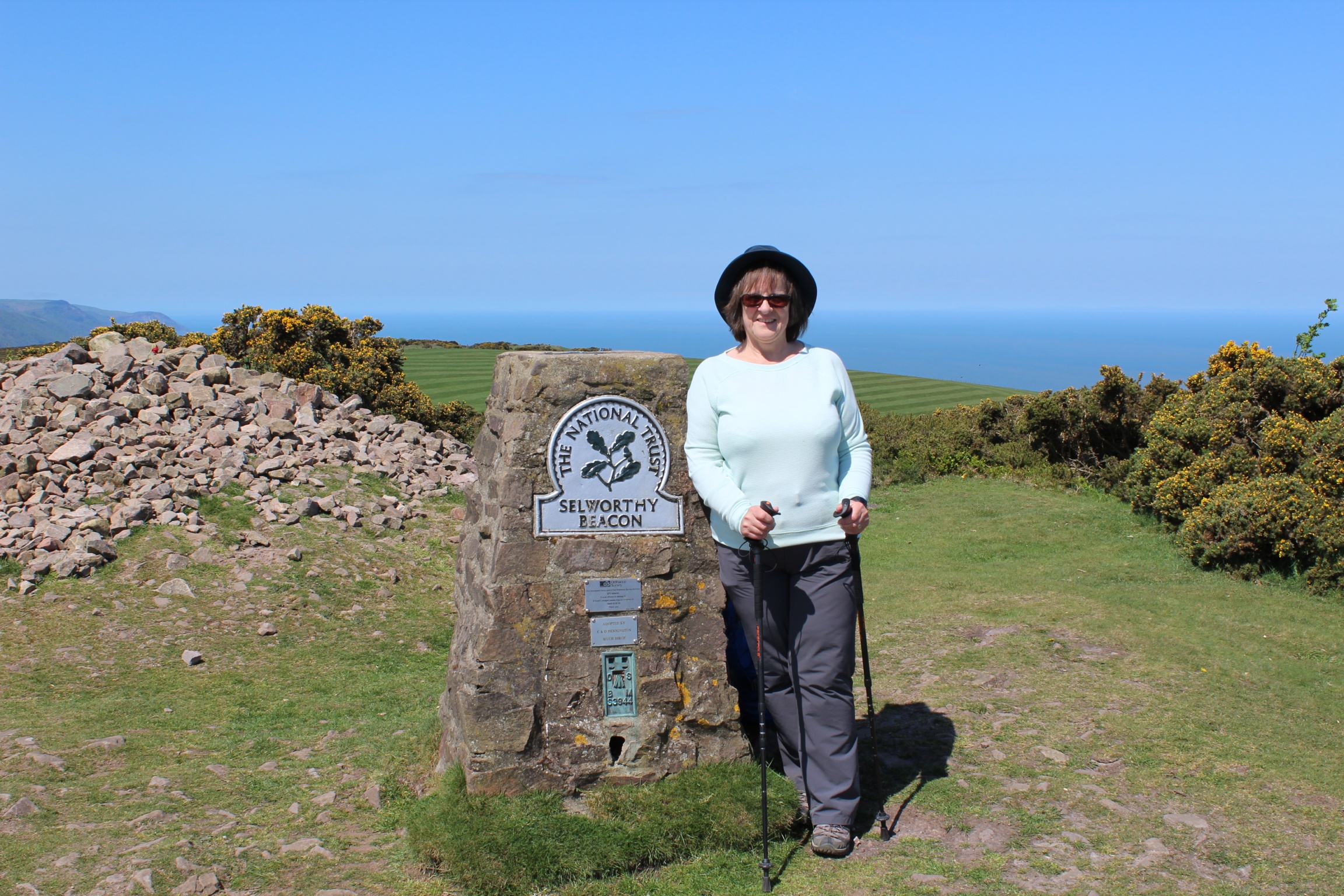 We can’t be there for people like Linda without people like you. Every year our amazing supporters, donors and fundraisers come together to raise the £10m we need to operate our services in support of the entire UK fire services community.