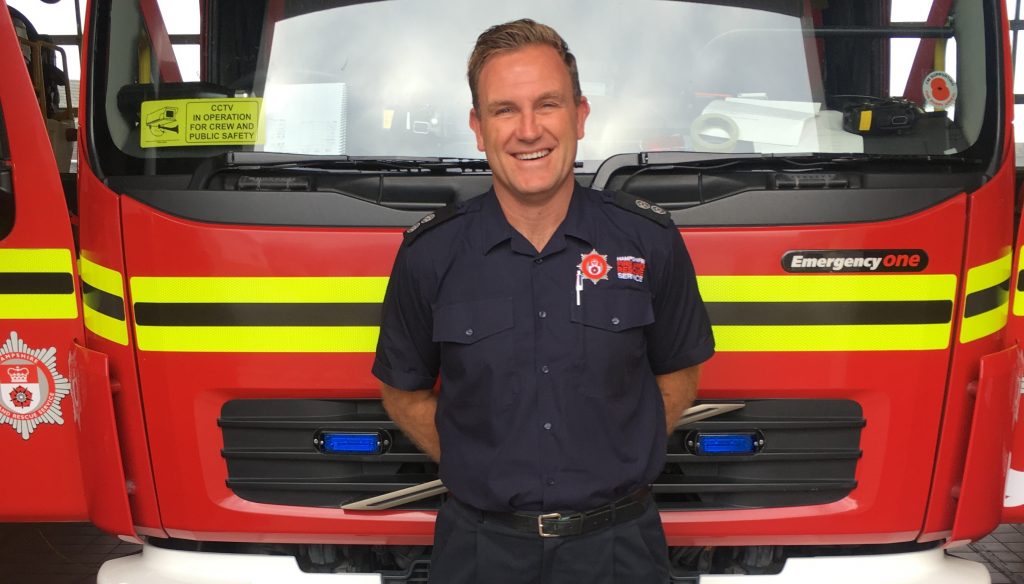 While recovering from surgery, Hampshire firefighter Stu Vince had an experience that haunted him for eight years, leading to him being diagnosed with severe anxiety, depression and PTSD. Now he's using his own story to inspire other people to open up about their own mental health issues.

Firefighters are exposed to all kinds of traumatic incidents during their careers. But it was in his hospital bed in 2011 where events occurred that led to Stu Vince being diagnosed with severe anxiety, depression and PTSD.

The day before, the Hampshire firefighter had undergone surgery to remove a kidney in order to donate it to a family friend who was in renal failure. Considered major but a fairly common procedure, the operation had gone well and Stu was lying in bed recovering. A nurse had been to check on him in the morning, and all was well.

Suddenly and without explanation, Stu felt a funny click in his stomach, his heart rate shot up and alarms around his bed all went off as he went into tachycardia. As doctors and nurses rushed to tend to him and lower his heart rate, Stuart experienced something that went on to haunt him for eight years.

“I saw the grim reaper standing next to me, tapping his wrist and I knew death was coming for me,” he says. “I know how that sounds, and I don’t know what on earth caused it. For years I didn’t talk about it, because I felt a bit stupid, but it was so vivid. I know what I saw. If anyone had said there wasn’t someone in that room with me, I’d say there was. People talk about near death experiences, and I don’t know if this is what happened, but I’m adamant someone was there waiting to take me away, and it scared the life out of me. It was horrible, I wouldn’t wish it on anyone.”

Stu was soon well enough to go home, but couldn’t stop thinking about what he saw. After a few days, he had a huge panic attack and went back into hospital, thinking he was having a heart attack.

“I knew death was coming for me and it scared the life out of me. I wouldn’t wish it on anyone.”

Over the following years, he found himself in A&E six times thinking he was having heart failure, only to be told it was a major panic attack. Living in a constant state of heightened anxiety took its toll on Stu, who started self-harming and his marriage fell apart.

“Self-harming doesn’t just mean cutting yourself, I was being very reckless, and I just didn’t care,” he says. “I was drinking lots and taking unnecessary risks. Then my Grandad, who I was very close to, passed away, and everything just kicked in. It got to the stage where I couldn’t leave my house and felt like I was in a hole I couldn’t get out of. ”

In 2015, Stu had a breakdown and was signed off work, which he says was the worst thing for his mental health, as it took away his safe place. But unable to explain what he was going through, friends thought he was being flakey and criticised him for cancelling plans last minute.

He decided enough was enough, and reached out to The Fire Fighters Charity, and was offered a week in Marine Court in Littlehampton. He had visited Harcombe House after his surgery for help getting back to fitness, so trusted the Charity to take his condition seriously.

“It was brilliant, you’re in this safe little bubble,” he says. “I had psychological support every day, which really helped, and I now recommend the Charity all the time to guys I work with.”

Stu also signed up for regular counselling at home, which included hypnotherapy sessions. One of the biggest realisations he felt was how many people were experiencing similar issues and didn’t feel comfortable talking about it.

“After my breakdown, I was really upfront when anyone asked why I was off sick. People started to come up to me and say they’d been there or were going through it at the moment, and I realised just how many people were suffering and not talking. I decided it was time to share my own story.”

Through an initiative with Hampshire Fire and Rescue Service, Stu was offered the chance to become a Mental Health First Aider. Along with his colleague, Adam Bundle, Stu began a two-year campaign of positivity, where they would go into workplaces to encourage people to open up, and have now progressed to become first aid instructors.

Two #Hampshire firefighters are opening up about their #mentalhealth to get others talking.

Stu and Adam are taking part in a 3,000 mile row across the Atlantic next year to help raise awareness. @fireARC2020 @Hants_fire

“My experiences have definitely enriched my ability to discuss mental health with colleagues,” says Stu. “It always used to be a little bit taboo, especially in the fire service, people don’t like to talk. But stuff affects all of us, so we need to share it with each other.”

Earlier this year, and having already started training to be a first aider, Stu had a breakthrough with his own recovery: “I couldn’t shake the vision I’d had in the hospital, and because so many of my panic attacks had felt like heart attacks, I went for a scan on my heart to see if there was anything wrong. The scan came back all clear, and – touch wood – I haven’t had a panic attack since. I think I needed to be told there was nothing physically wrong so I could move on with my life, and truly get on the mend.”

Wanting to do something to raise money for The Fire Fighters Charity, continue to raise awareness of mental health and find a way to end their two-year campaign with a bang, Stu and Adam are planning on taking part in a 3,000-mile, cross-Atlantic row in December 2020. The metaphor of the isolation of the sea is not lost on Stu: “Suffering with mental health is like feeling adrift and not able to see a lifeline. I think I need to do this, for my own wellbeing, to know I can cope with just me and my thoughts out on the water for two months. I always thought of myself as being mentally strong, but mental illness can strike anyone. The more we can do to raise awareness of it and reduce the stigma, the better.”

If you’re experiencing similar feelings to Stu and want to talk to someone, let us see if we can help. Get in touch today on 0800 389 8820 or enquire about our services online.