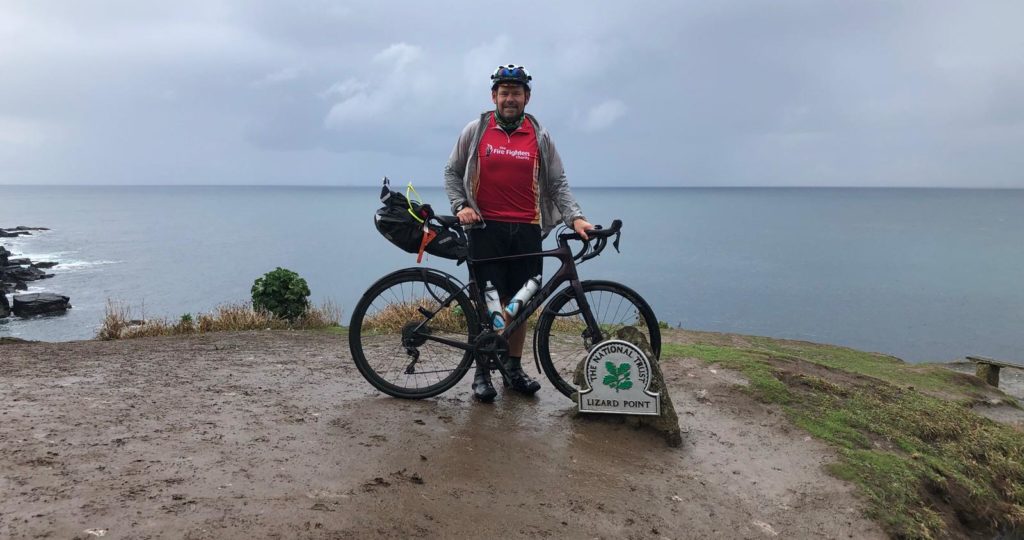 Recently-retired London and North Yorkshire firefighter Stuart Rye cycled the four compass points of mainland Britain for his Fire Family Challenge. And it made him reflect on his own journey with mental health.

Stuart Rye’s Fire Family Challenge to cycle the four compass points of mainland Britain in one trip turned out to be much like his journey with mental health.

There were days when the wind was with him, and others when it felt like the elements were against him. There were times he had only himself to turn to when encountering an unexpected obstacle. There were ups, downs and days where he didn’t feel like getting out of bed.

But the one thing that he learned as each day passed was to keep concentrating on the road directly in front of him. And trust that the rest would follow. 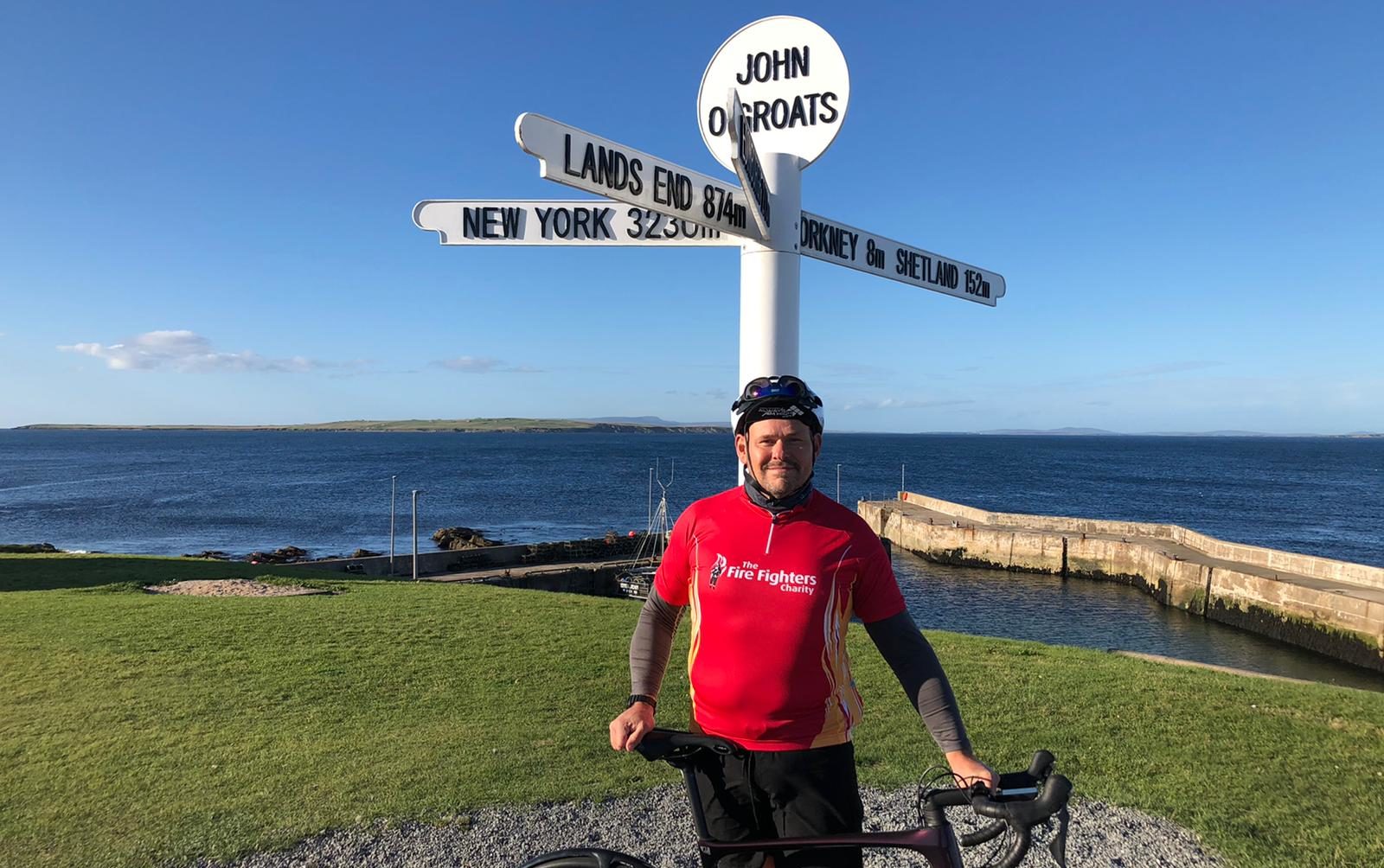 Stuart joined London Fire Brigade in 1990, where he spent 13 years before transferring to North Yorkshire with his wife, who is also a firefighter.

In May 1993, Stuart was part of a crew called to a fire at a launderette in north west London. He was inside with four other colleagues when the roof collapsed, trapping them inside.

“I was completely buried, with the falling debris knocking off my helmet and face mask so burning embers fell onto my head, face, neck and hands as I tried to protect myself,” he says. “I was eventually rescued by nearby crew members and taken to hospital, where I found out one other firefighter had lost his life.”

The incident has left a lasting impression on Stuart, who was off work for a year recovering from severe burns and the impact on his mental health. While his physical wounds healed, he was left with serious mental injury. It was only during a training incident six years ago when he realised just how much he was still affected.

“I’d kept busy in the fire service, concentrating on helping people out and gaining promotions, relishing the job I was doing, both in London and then North Yorkshire,” says Stuart. “Keeping busy kept my mind occupied, so I didn’t really dwell too much on the incident in 93. Then something happened on a training course that triggered all these flashbacks.”

About six years ago, Stuart was taking part in an entanglement course, where a training rig replicates an incident where cables have come down as a result of their containers melting in a fire.

“You had to crawl through with your breathing apparatus on and your vision was deliberately obscured, so you had no choice but to get through and untangle yourself,” he says. “When it was my turn, inevitably, I got trapped. People were talking and I couldn’t hear the instructor, so I became panicky and overwhelmed. I eventually managed to get out and was fine, but I had to take myself off to calm down. I didn’t tell anyone what was going on, because I didn’t want any fuss. But all these memories had come flooding back from being trapped in this fire.”

Having taken some time off, Stuart sought counselling, and managed to return to work to complete his 30-year service, before retiring in June this year from his position as Crew Manager. But while he was suffering, it did not occur to him to contact the Charity for support, thinking someone else deserved help more than he did.

“I didn’t think I was worthy of help, that there were people with more severe issues than me. But I wish I’d reached out for help earlier.”

“I didn’t think I was worthy for help at the time, that there were people with more severe issues than me,” he says. “While I don’t regret anything, because who knows how life might have turned out, once I eventually did reach out for help, I did wish I’d been a lot earlier.”

Stuart eventually contacted the Charity, and was offered a place at Jubilee House, our residential centre in Cumbria, in January this year.

“I absolutely loved it, and just found it so beneficial,” he says. “Everybody is there for their own reasons, and when you did open up to someone, they were so receptive to your experiences. You spend a week away from home in a centre full of absolute professionals; I just found everyone there to be brilliant, so supportive and non-judgemental.”

Wanting to do something to say thank you for the support he’d received, Stuart planned a sponsored cycle ride. Having taken up cycling as a hobby to replace his time spent playing rugby, Stuart had never really cycled any sort of great length. But he was inspired while on holiday in Cornwall, when he encountered a group of people cycling from Lands End to John O’Groats.

“I got chatting to them and heard what they were up to and I just thought, I fancy giving that a go,” he says. “I’d started going out for longer road rides and really enjoyed it, increasing my training at 20,30,40,50 and 60 mile trips. So I figured out a route where I could cover all the compass points of mainland Britain in two weeks.” 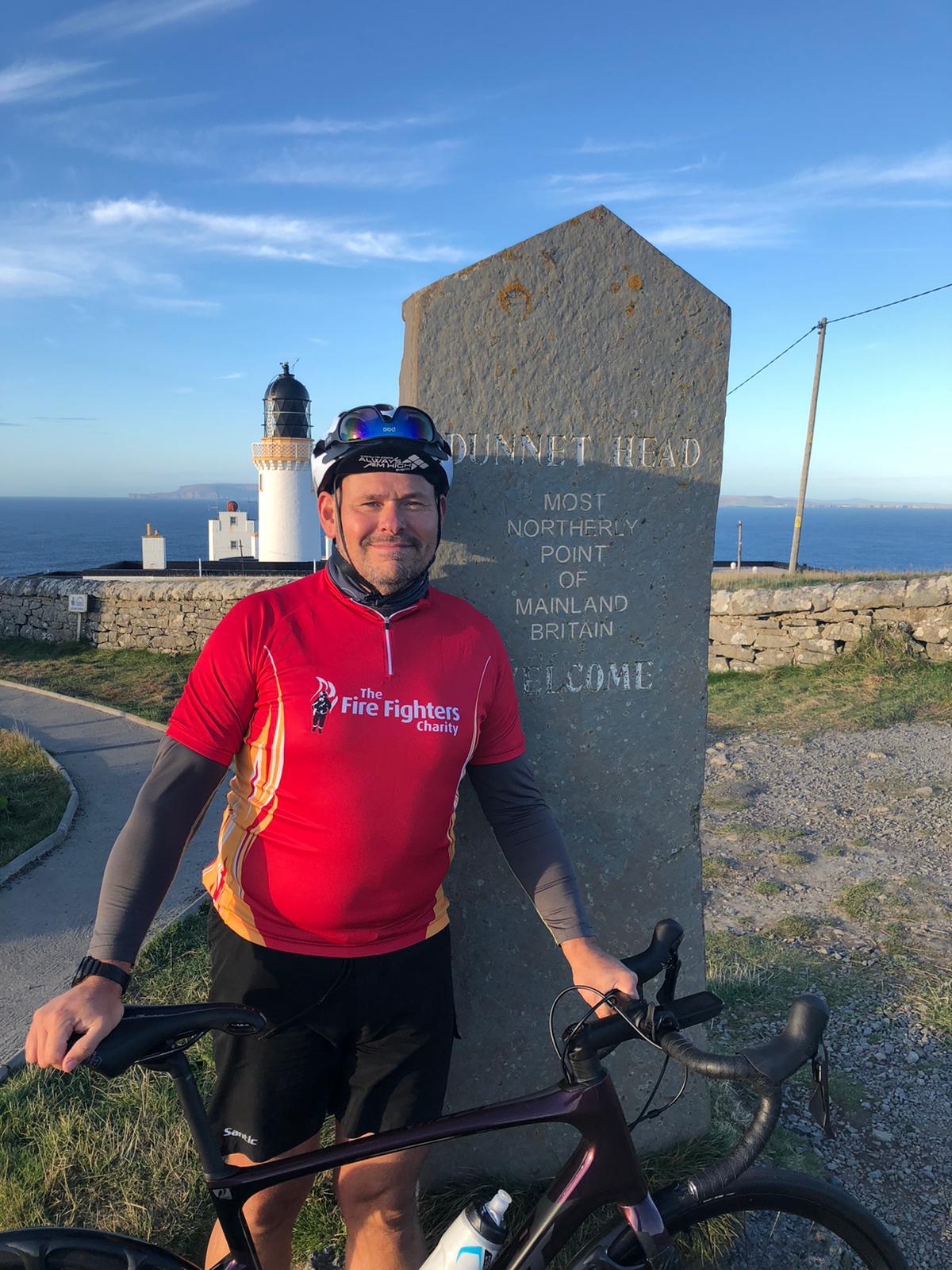 Stuart devised a route that would take him from the furthest north point (Dunnet Head, about 25 miles north of John O’Groats) to the most westerly (Ardnamurchan Lighthouse in Scotland, just above the Isle of Mull). From there he would go to the most easterly place he could, (Lowestoft Ness in Suffolk) before eventually cycling through London and heading south to the Lizard Peninsular in Cornwall before ending at Lands End.

On a Tuesday morning in September, he set off. He would average around 95 miles of cycling each day, eventually covering around 1,400 miles in total. And he did the whole thing completely unsupported.

“It was hard work! It wasn’t necessarily how physically draining it was, but the mental drain of knowing you had to keep going and to beat the darkness, doing it at a time of year where the days are getting shorter. I tended to break down the days and just concentrate on what was directly ahead of me. The enormity of the task can mess with your mind if you let it, which is the last thing you want.” 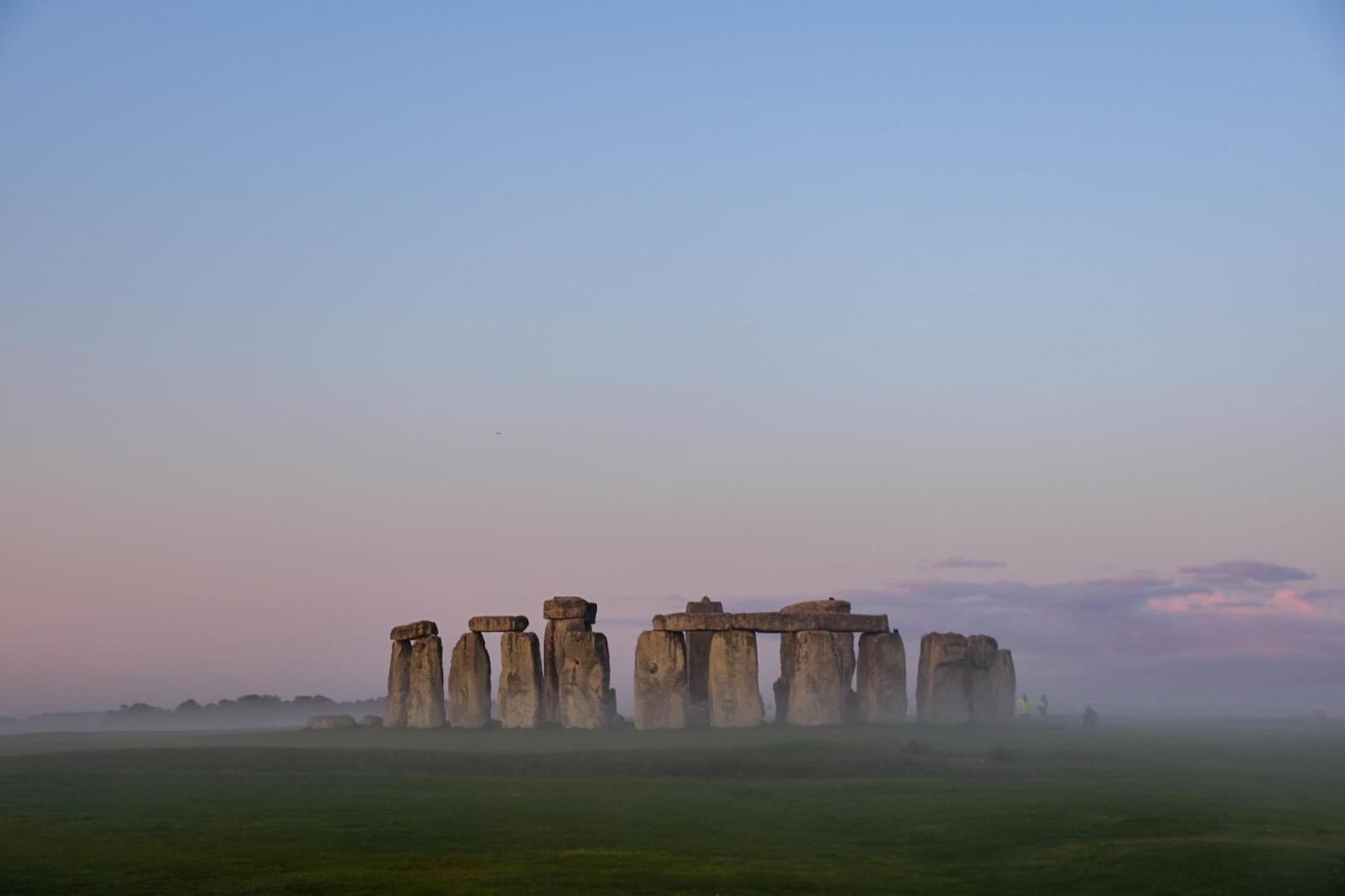 “It’s a long time with your own thoughts, and there were some long, dark days where you think what on earth am I doing, this is killing me,” he says. “But you just kept going, and I was always determined never to give up. I’m not interested in being the fastest, for me it was the sheer enjoyment of getting out in the fresh air, and the accountability to keep going because I was doing it to raise money for The Fire Fighters Charity.”

Stuart says the scenery he encountered along the way were his highlights of the trip: “It was pretty spectacular on some days, and there are certain points I’ll never forget. One of the locks I had to cross, I was the only foot passenger so had the sight of the five or so dolphins following behind us completely to myself. Another highlight was in the Lincolnshire fells where I was following canals. It was dead flat and I was in the tail wind, so managed some high speeds that day! I even popped into Jubilee House while going through Cumbria to remind myself where the money I was raising would go.” 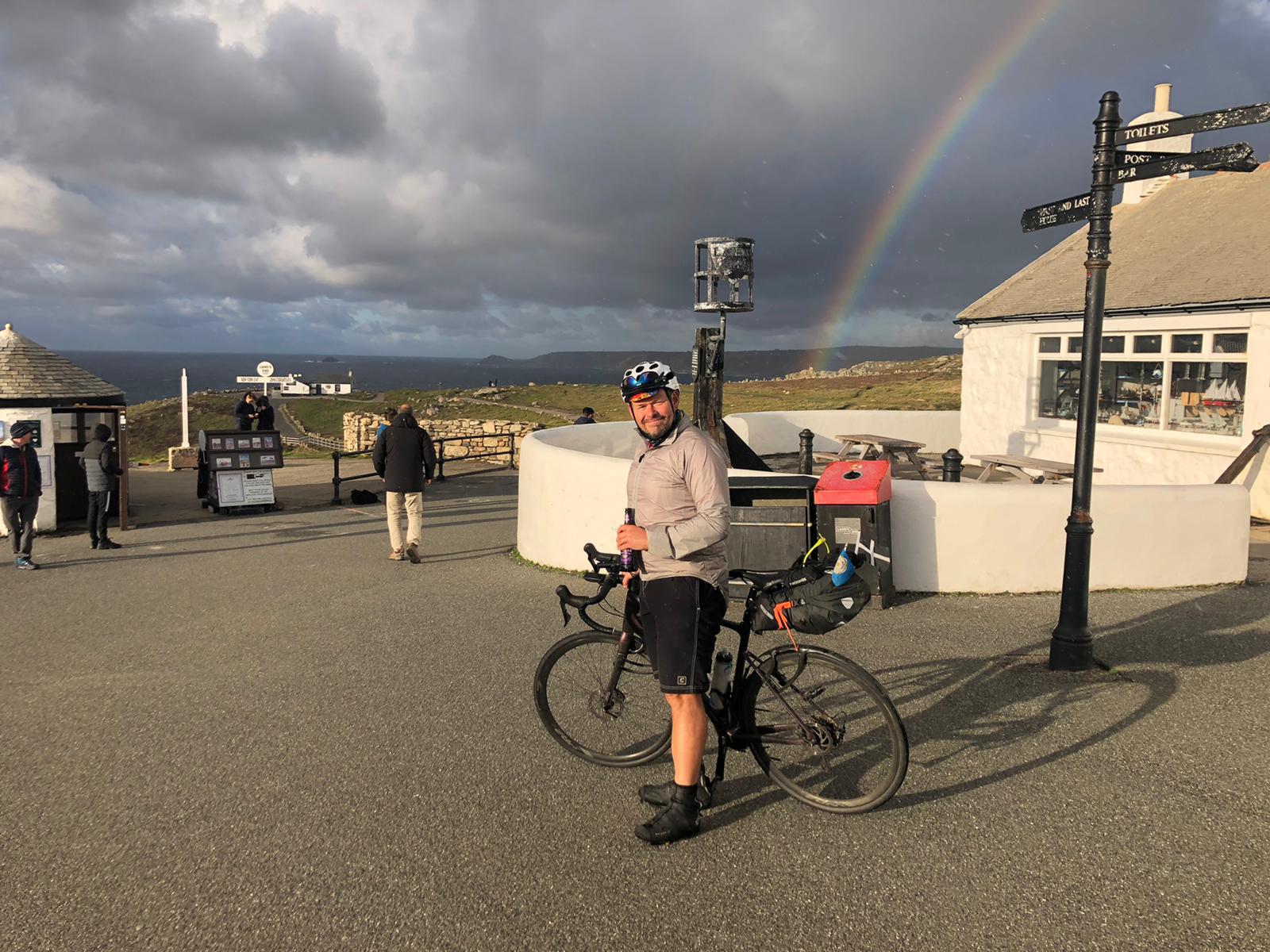 After two weeks on the road, Stuart ended his voyage after 1,400 miles, celebrating in Cornwall with a very well-deserved pint. He had managed to raise just over £3,800 for the Charity.

“The Fire Fighters Charity offers facilities that benefit not only working and retired fire personnel, but also their families, so everyone should be supporting it,” he says. “I was so impressed with the treatment that I and so many others received, I just think it’s amazing. Plus with the financial difficulties that have come from Covid, we all need to be doing even more to support you guys.”

Stuart also opens up on how his incredible fundraising effort improved his own mental wellbeing in the second episode of the new series of our Shout!Podcast. 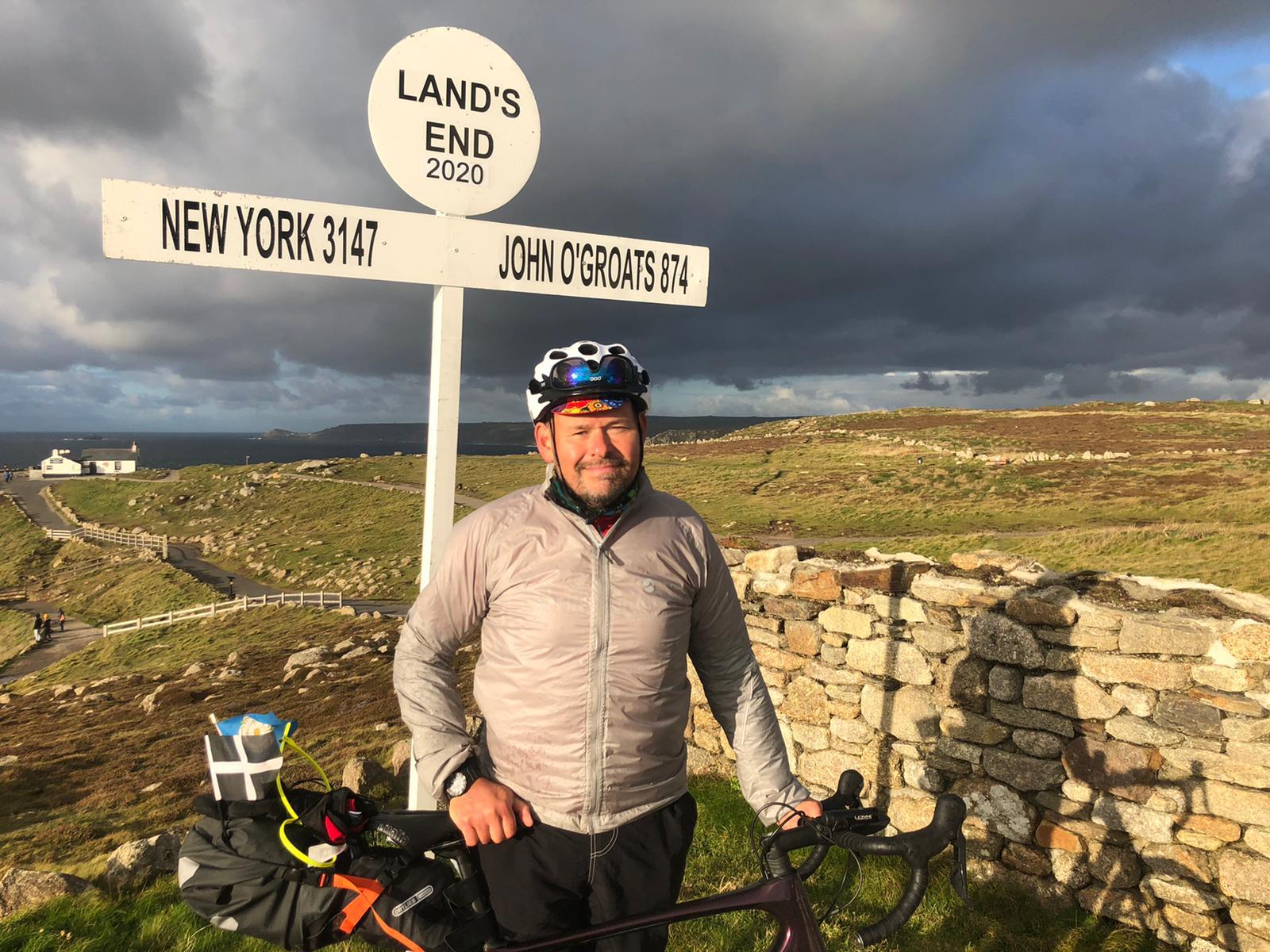 We can’t do what we do without incredible people like Stuart, who, like many amazing others, has taken part in our Fire Family Challenge this year. Our fundraising has been significantly impacted by the coronavirus pandemic, but with your support we can continue to be there for people in need in the UK fire family.