Want to give something back, like Sally? Find out how you can fundraise.
Learn more

Sally Barnett began her career in the Fire Control room at Shropshire Fire and Rescue Service HQ. She became a retained fire fighter after recovering from a serious back injury. She says she would never have been fit enough to do so without the help and support of The Fire Fighters Charity. 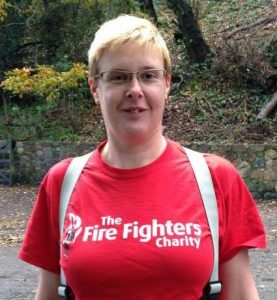 Sally, 42, fell and fractured a vertebra while out horse-riding with a friend. After spending two weeks immobile in hospital for fear of paralysis, she was fitted with a metal frame to immobilise the fracture while she moved around. After this, she began intensive physiotherapy, including hydrotherapy.

She says: “During this time my colleagues made me aware of the Charity and the services it provided. Until that time, I had no knowledge of the Charity or the work it does. I rang the helpline and requested an application pack. Having filled in all the relevant details and got my GP to fill in their part, I posted the form and very quickly received an offer of rehabilitation at Jubilee House in Cumbria.

“I arrived at Jubilee House somewhat apprehensive – a fear soon allayed as the staff introduced themselves and explained the way things work. I soon learnt I was in the same boat as everyone else at the centre, all of whom had suffered some form of injury and were there to get better. The programme was tailored to each individual by the physiotherapists and we were allocated a group with people of similar ability levels.

“We undertook gym work and pool therapy and also workshops on the emotional effects of our injuries, giving a totally holistic approach to the whole process. I made lasting friends while I was there and I cannot emphasise enough how beneficial my visits were for my recovery, both physically and mentally. I arrived at Jubilee unable to even reach down and put my own socks on, in considerable pain with limited movement. By the time I left I had learnt how to manage my injury, the pain, how to strengthen muscles around my injury and prevent further damage and was able to put on my socks!” 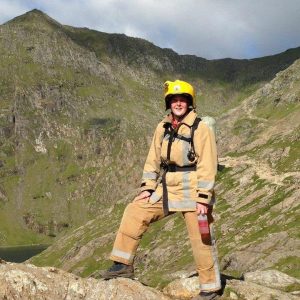 Sally climbed Snowdon after her rehabilitation

After rehabilitation, Sally climbed Mount Snowdon to raise money for the Charity, raising £1500. She then applied to become a retained fire fighter in Market Drayton, her local station. While preparing, she resolved to walk The Wrekin, a hill near Wellington in Shropshire, every week for a year in full fire kit and a breathing apparatus cylinder weighing 17.5kg. She describes it as “hard going… but I persevered!” As the year progressed Sally’s fitness improved and she completed the year along with a bonus trip up Mount Snowdon! She raised a fantastic £2216 from this.

She says: “My Wrekin year and becoming an operational fire fighter have been two personal huge achievements that I am very proud of but without the support of my partner Keith, family, friends and the Charity I doubt I would have managed it. I have no hesitation in recommending the Charity to my colleagues in the fire service and will always encourage fundraising to keep it an option for injured fire fighters. I will be eternally grateful to them.”