Having seen his father-in-law’s firefighters’ helmet proudly displayed at home for years, Adam Tubby always knew how important it would be to have a meaningful tribute to his own years of service when he eventually retires.

However, with many firefighters now being asked to pass their helmets on once they leave the service, he faced having to one day give up one of his most treasured belongings. It was this that ultimately spurred him on to try and create a lasting memento for firefighters like himself – all while giving back to The Fire Fighters Charity, which he holds very close to his heart.

“One of our firefighters was helped by the Charity. He’s sadly passed away now, but he had motor neurone disease. The Charity looked after him and his wife,” says Adam, who is a wholetime and retained firefighter with Suffolk Fire and Rescue Service. “It was important for me to help the Charity out.” 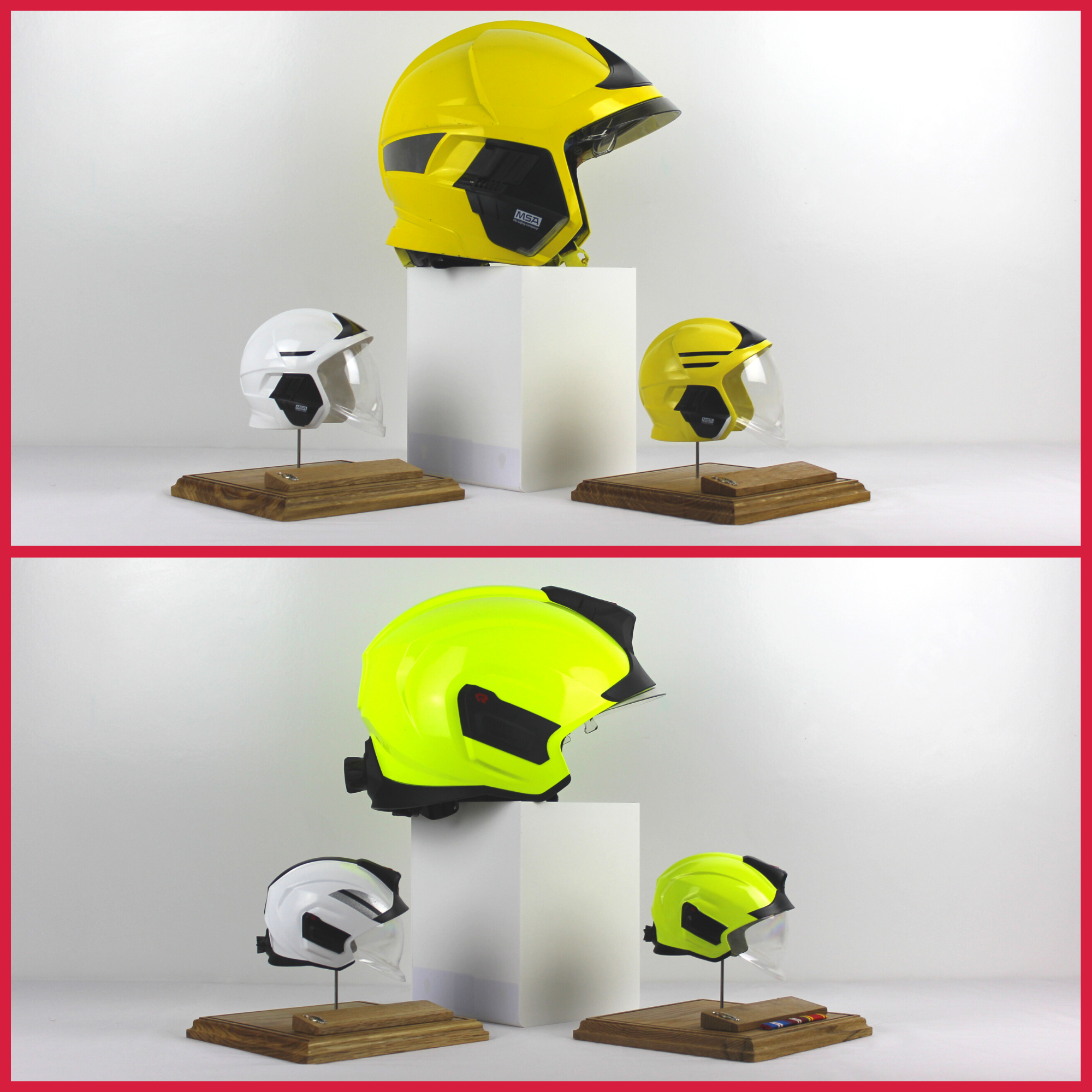 It began with him offering to make presentation axes – which are now sold through our online shop – before he set his sights on recreating helmets more recently. Adam’s vision was to make miniature replica helmets, mounted on an oak plinth and resting in a display case, that would be exclusive to the Charity and sold through us.

“As soon as I saw I could help, it was set in stone from then and I knew I’d do whatever I could,” says Adam. “Firefighters’ helmets get put through a lot; sweat, smoke, grime. But cleaning regimes have got a lot better in recent years, which means that helmets can be passed on. So firefighters don’t always get to keep them when they retire, like they used to.

“My father-in-law was a firefighter and kept his. It’s a good memento of his service and what he did in his career… I thought, what can I do to create the same, but make it something that’s modern and smaller? It would be great for retiring firefighters to have something like a helmet to remember their time, but a real one is also too big to have in your front room on a piece of wood! So the idea for the miniature version hit me, and it just went from there.” 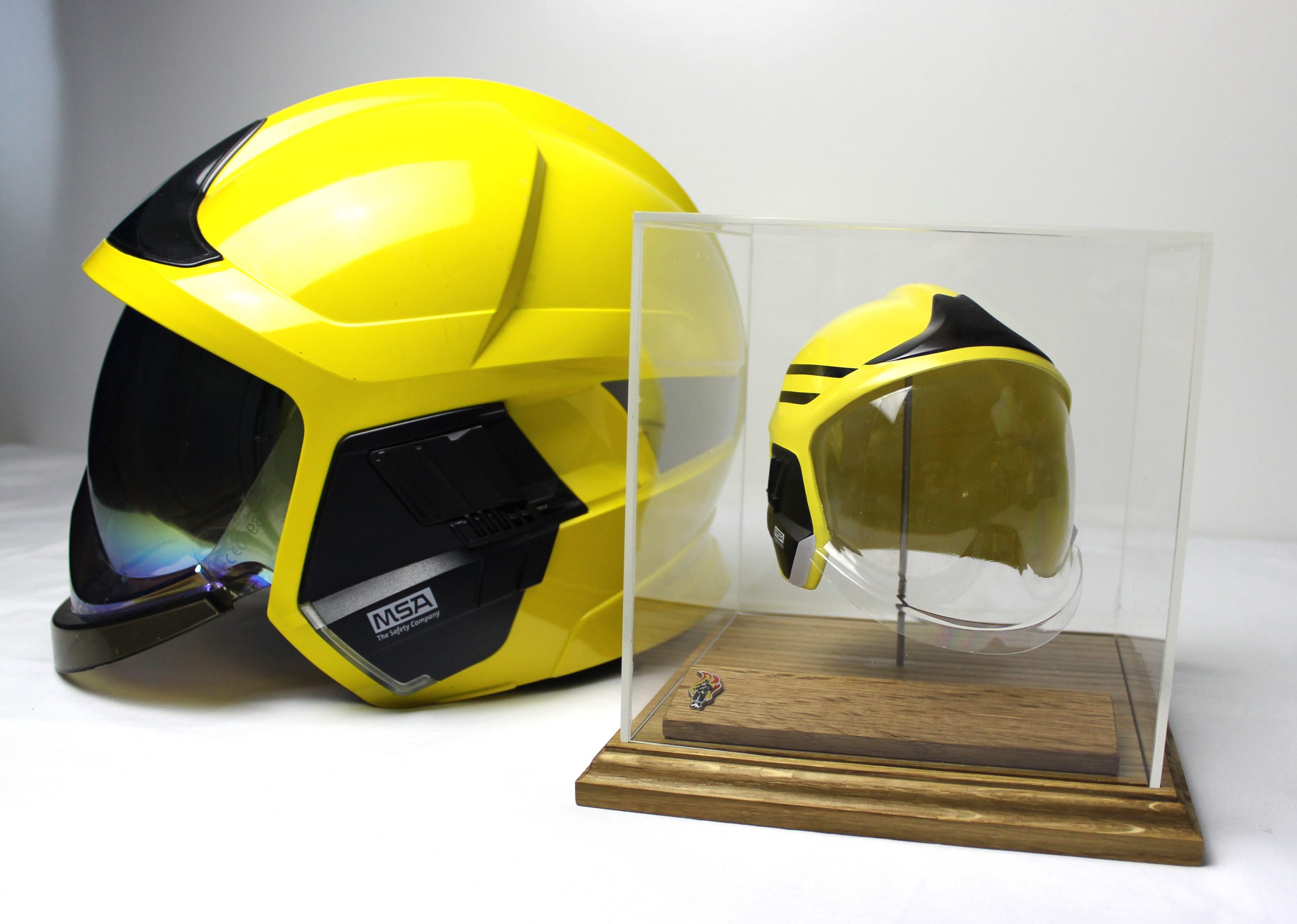 “We wanted to do it properly though and get the manufacturers of the original helmets, MSA Safety and Rosenbauer, involved too.”

He began with a friend by programming the exact measurements and angles of his own helmet into a 3D printer – which took around 12 hours – before printing a smaller replica one. 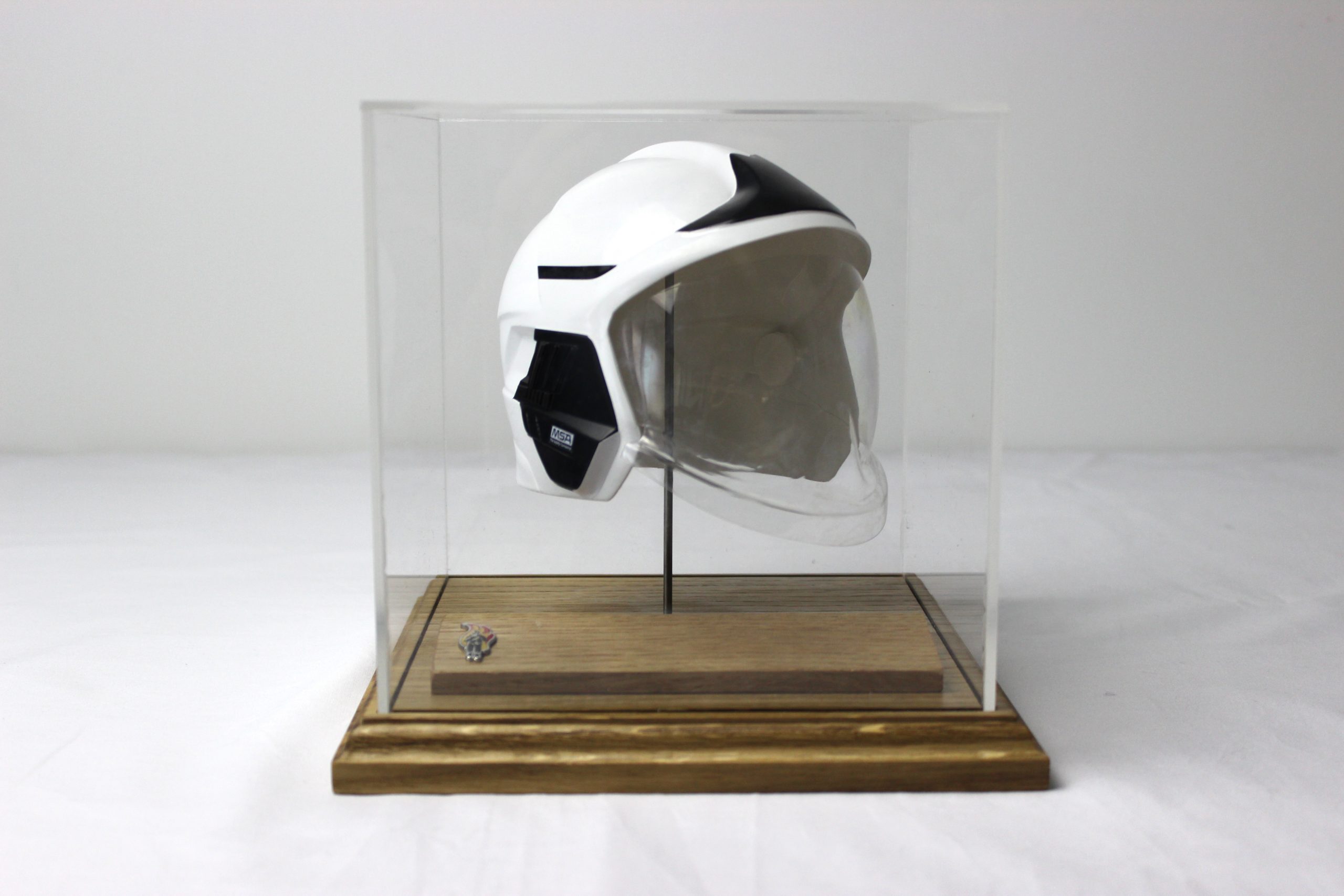 “I have a Rosenbauer helmet at work so I took that home and scanned it in. I used it as the base model and sent it across to them,” adds Adam. “They loved it straight away. I explained that I was hoping to sell them exclusively through the Charity, to raise money for them, and they were really keen to be involved. Then with MSA Safety, I sent them photos and straight away they said ‘yes, here’s one of our helmets’. It was incredible. They’ve been really good the whole way through.”

Each helmet is printed over several hours, before being mounted by hand. Adam adds: “It was a lot of work, crazy, but they look awesome. Now we’re hoping we can grow and help the Charity along the way.” 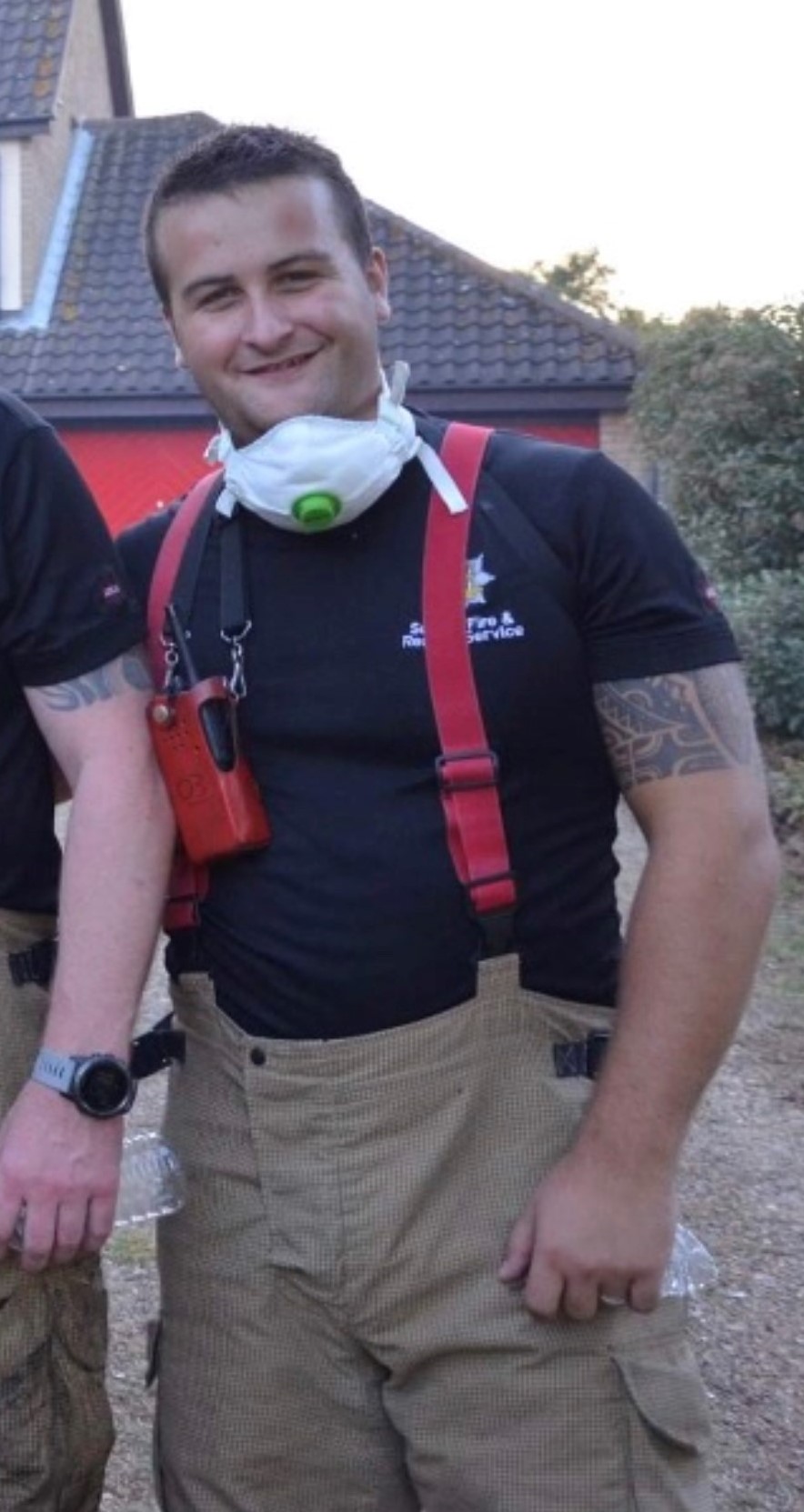 The replica helmets are available in two styles: the MSA Safety Gallet F1 XF and the Rosenbauer Heros Titan Helmet. And Adam has worked closely with both MSA Safety and Rosenbauer over the last 12 months to ensure they are a true replica of the real things.

They can either be ordered in yellow or white and can be personalised with rank markings, from firefighter right through to CFO. There’s also the option of having a personalised BA Tally or Engraved Plaque, and Service Medal Ribbons can also be added. 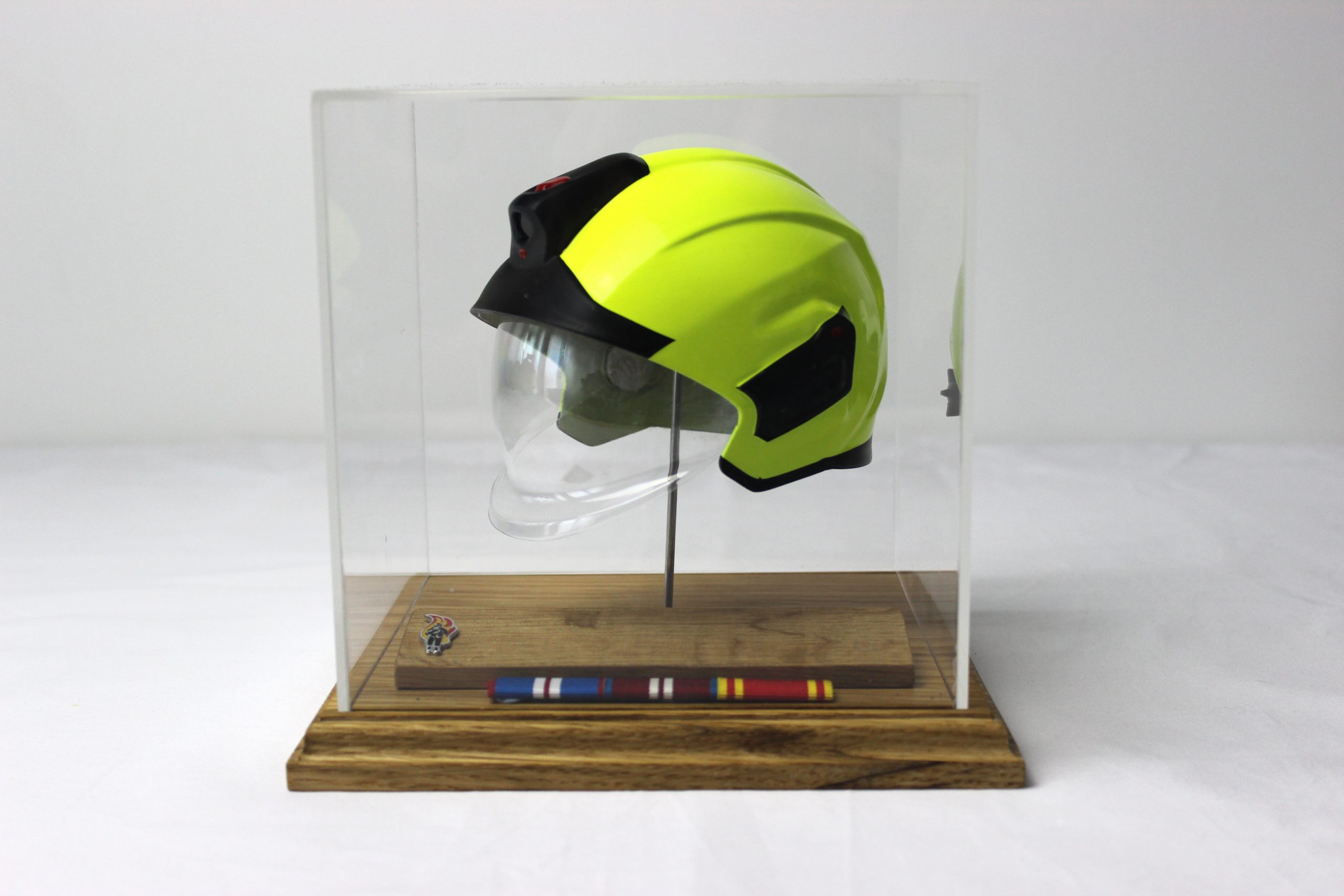 Once ordered, they can be completed and shipped within 21 days. Sales Price is £230 + p&p.

Kevin Biles, The Fire Fighters Charity’s Sales Manager, said of the new addition: “We are very excited to be working with Adam on these exclusive replica helmets and want to say a very big thank you to MSA Safety and Rosenbauer for their support with the project too.

“Our shop has a fantastic range of gift items and this new edition of replica helmets gives our customers the best in quality and choice when it comes to celebrating the dedication and service our fire and rescue service beneficiaries provide. Of course, all money raised from the sale of the helmets also goes straight back to the Charity, helping us to support firefighters in need across the UK.” 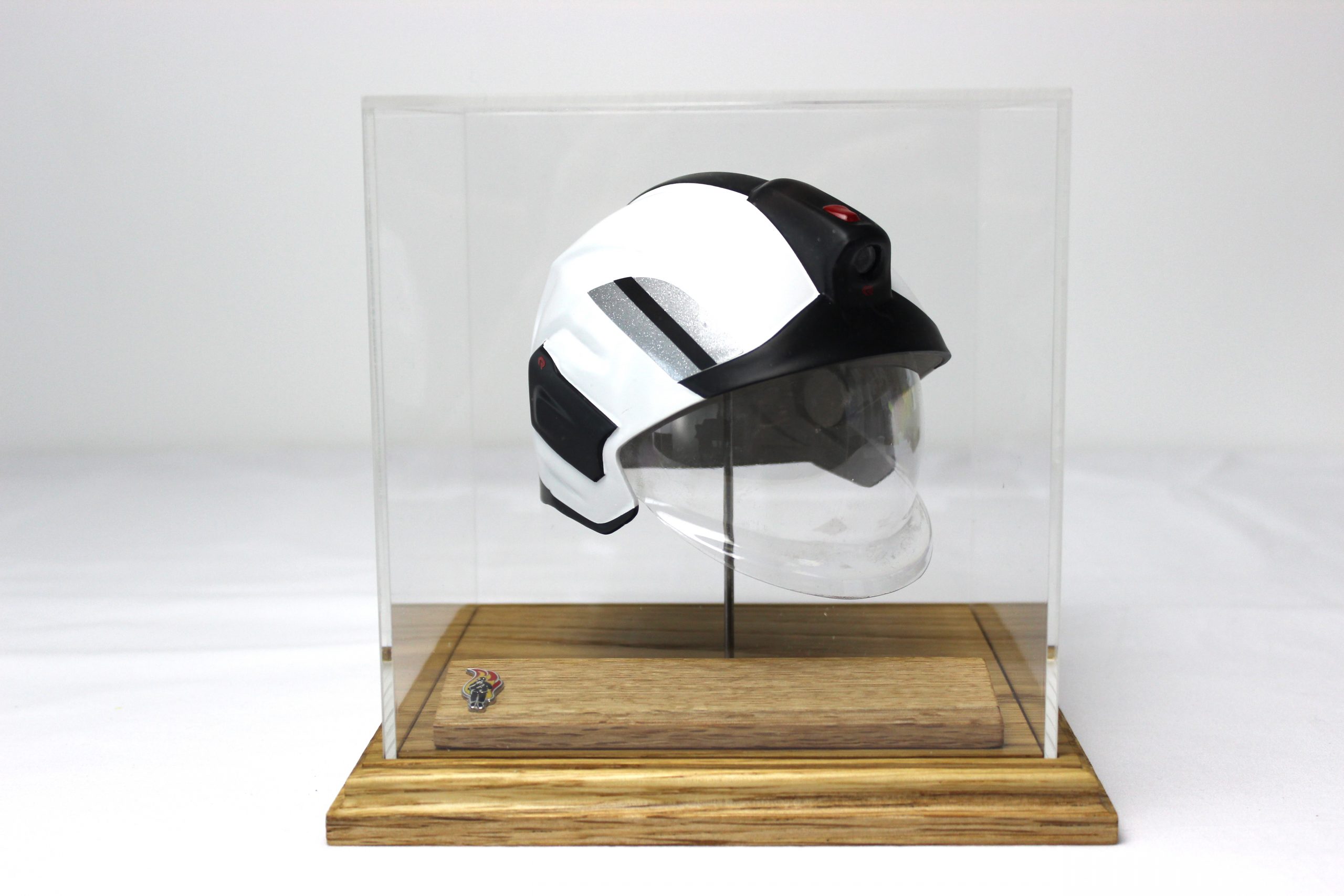 MSA Safety says: “We, as MSA the Safety Company, are committed to a mission which has never been changed since our creation in 1914: that men and women may work in safety and that they, their families, and their communities may live in health throughout the world.

“When we were first approached by firefighter Adam Tubby from Suffolk Fire & Rescue Service about his replica fire helmet, we immediately thought it was a brilliant idea of a gift to reward all retired firefighters after so many years of dedication and commitment towards their citizens. In parallel, when Adam told us he would support The Fire Fighters Charity by selling this replica fire helmets through their online gift shop, we thought it was a perfect match with our mission and the one of the UK Fire and Rescue Services.

“Supporting the Charity is part of our social responsibility and we were highly impressed by the quality of the work of Adam to replicate our iconic helmet and his determination to achieve his project.”

And Rosenbauer says: “We have been delighted to support Suffolk Presentation Gifts in their innovative product launch, the finished article is a testimony to their hard work and persistence in producing a top quality product. We are also very pleased that these endeavours ultimately support The Fire Fighters Charity which is a highly valued organisation in our industry.”

To find out more, visit our online shop here.