Completing a 190-mile walk in under five days (while in full fire kit) would be one thing, but firefighter Joey Hawke managed it while in serious pain from a rapidly-spreading leg infection. And to top it off, he proposed to his girlfriend at the end.

Joey, who is an on-call firefighter with Lancashire Fire and Rescue Service, was joined by four friends, Duncan, Phil, Penny and Tracey, on the epic fundraising challenge at the end of May – trekking from St. Bees in Cumbria to Robin Hood’s Bay in Yorkshire in full fire kit – all in support of The Fire Fighters Charity and the Royal Navy and Royal Marine Charity (RNRMC). 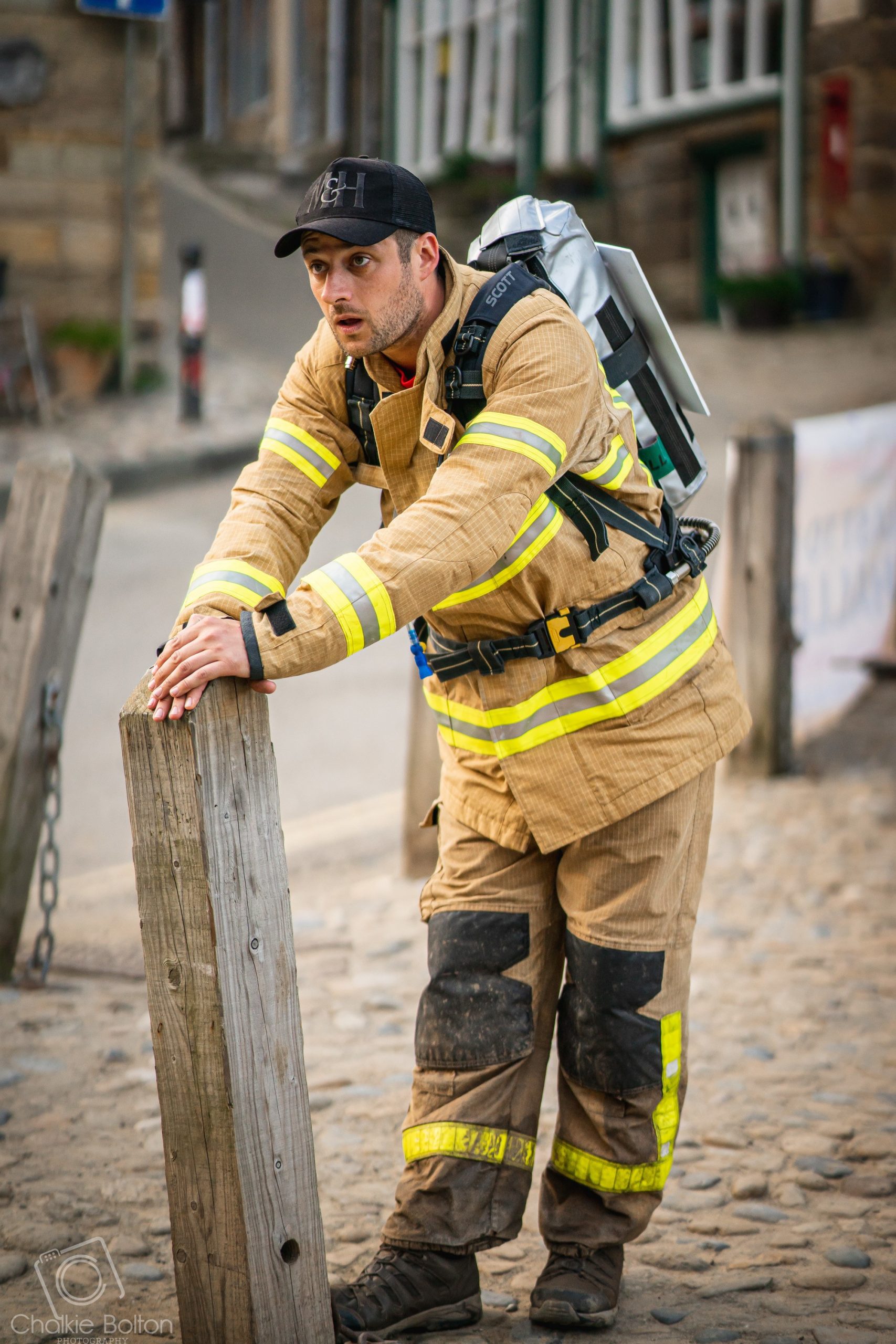 They not only completed it in four days, 13 hours and 55 minutes, but are expected to raise more than £4,000 thanks to the support they’ve received along the way.

And there was even more cause for celebration on the finish line, as Joey dropped down on one knee and proposed to his girlfriend, Emily, who was there with their family to congratulate him.

“We were meant to go to Florida earlier last year, but obviously Covid stopped that,” says Joey. “So I thought, ‘where could I do it where she won’t have a clue it’s coming?’ and the walk made sense. 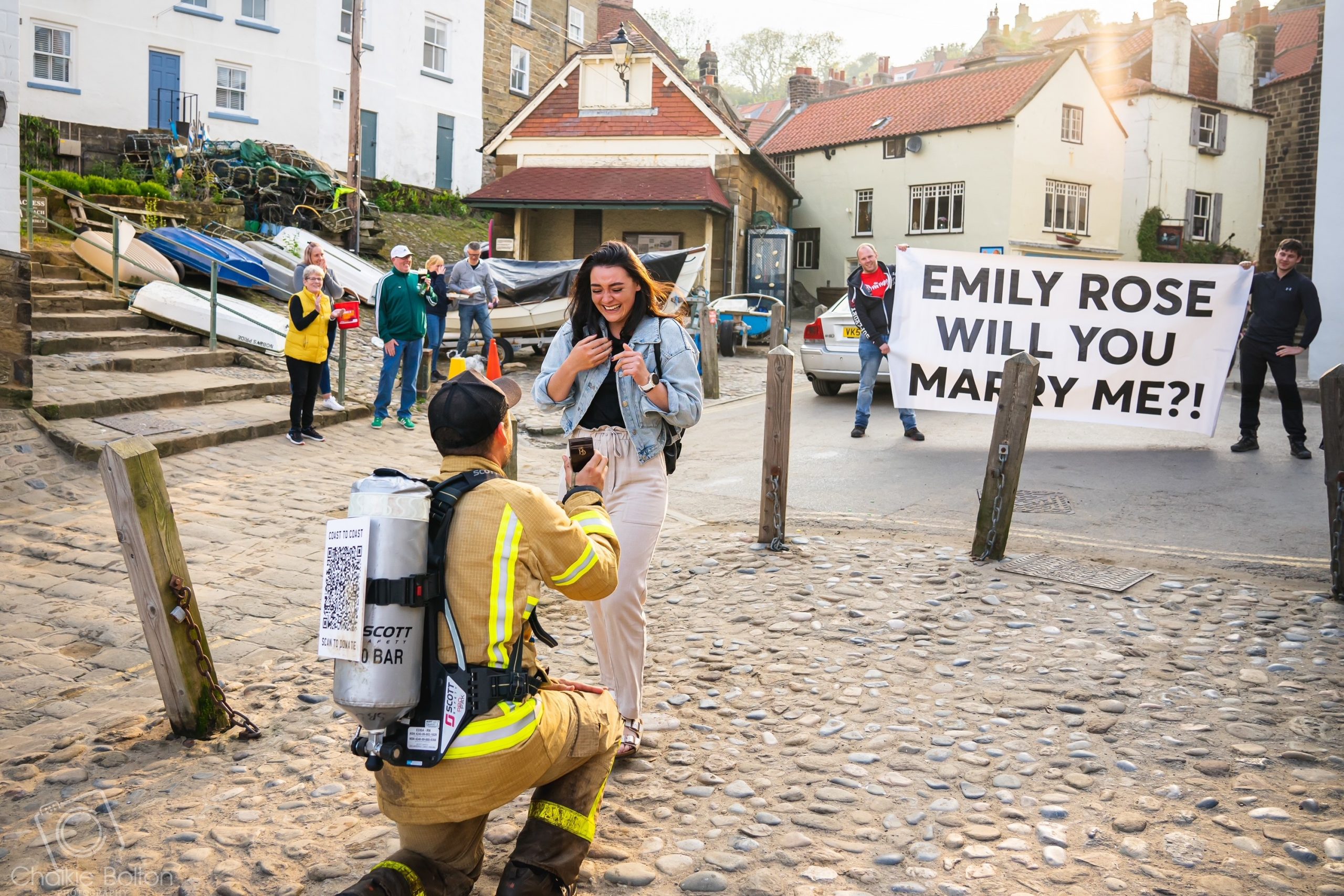 “My two mates made a massive banner, they unravelled that which said, ‘will you marry me?’ and she obviously looked at that thinking, ‘eh?’ then turned back to me and I (slowly) got down on one knee. I nearly started crying coming down the last hill to be honest, we were all so tired, but that meant I didn’t have too much time to think about it.”

Emily was blown away by the proposal – and it was a huge yes from her!

Joey was first inspired to support the Charity when he began in the service, even completing the Yorkshire Three Peaks last year. However, as a major test to himself, he and his friends set their sights on this walk several months ago after seeing how Covid had impacted our normal fundraising. 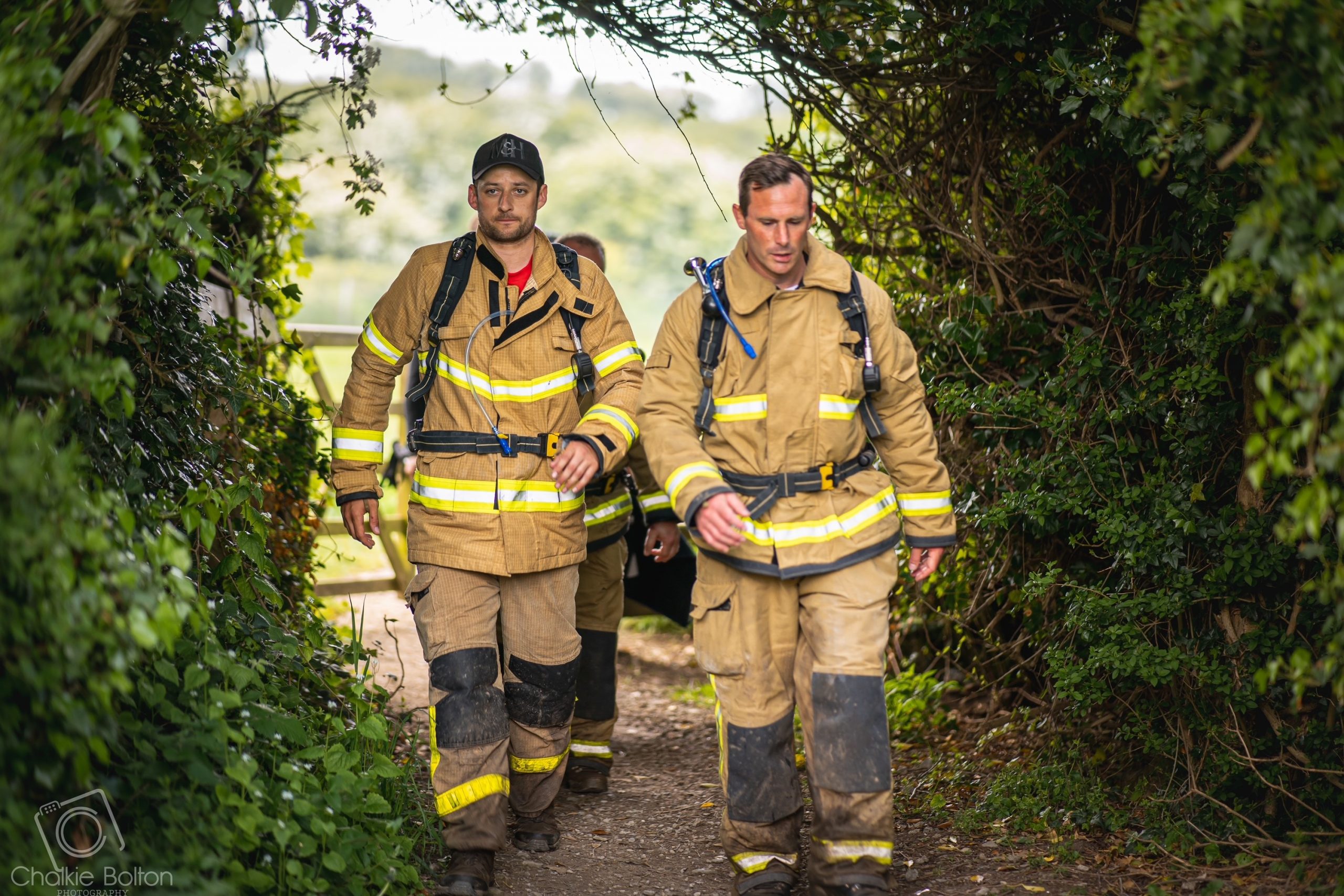 “I know one of the lads through the UK Fire Service Cricket team. He’s actually left the service now and joined the Royal Navy, so that’s where the idea to support The Fire Fighters Charity and RNRMC came about,” says Joey. “We just got talking about Covid one day, knowing all the fundraising events like the car washes were not going ahead over the last year, and we knew there was a need to raise that money elsewhere.

“I know a few firefighters that have previously used the Charity’s services, with a few going to Jubilee House in Cumbria, so I know what a good job it does.” 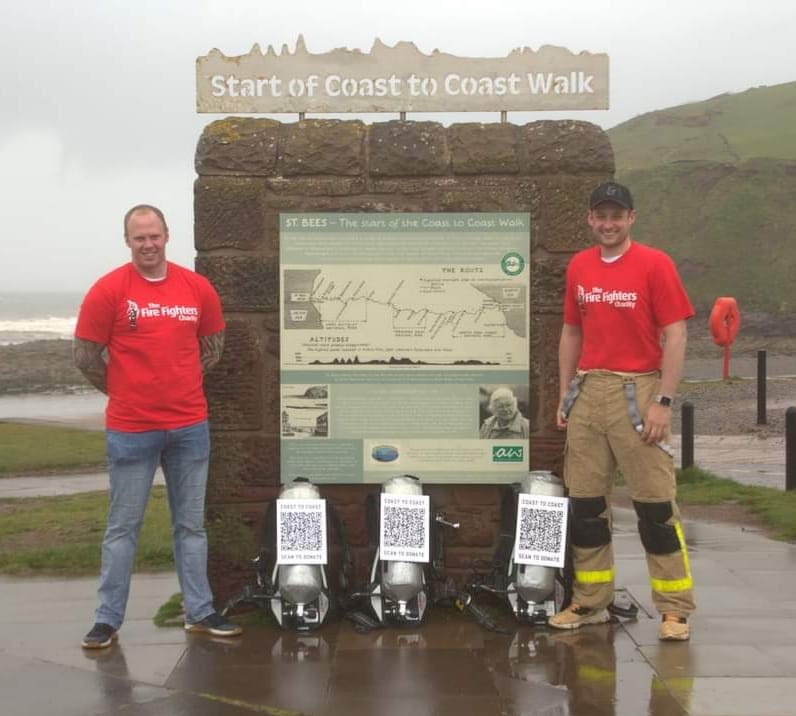 The group were kitted up in full fire kit and even carried breathing apparatus, adding at least another 17kg onto their back.

“I absolutely loved it but the Lakes were really tough on the Monday and Tuesday, says Joey. “We averaged 38 miles a day. The Friday we set our alarm for 1.51am! It was the strapping up of our feet that took ages in the morning, because of blisters. Then getting all the kit on. That got really heavy in the Lakes because it rained all day. 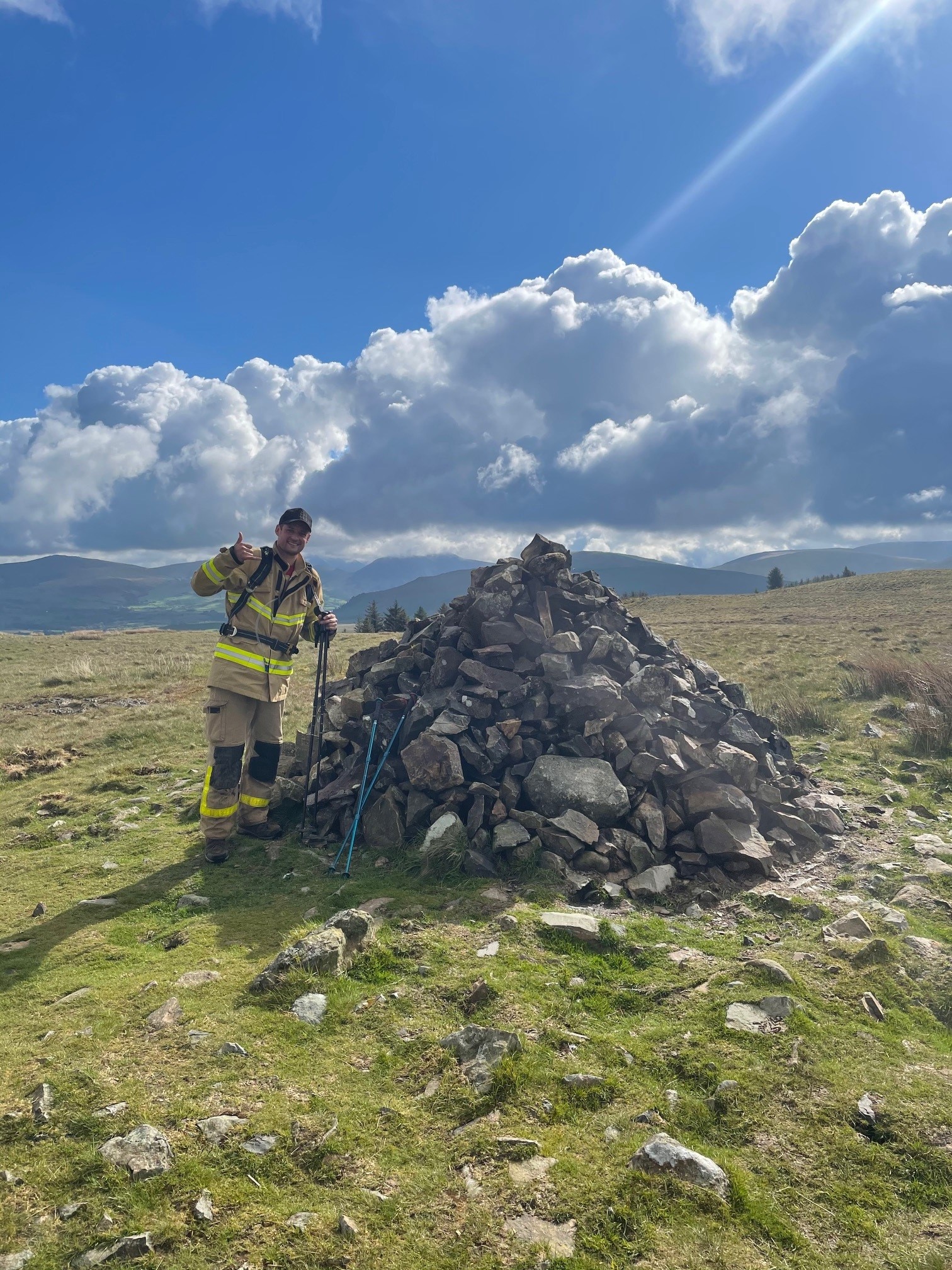 “I nearly gave up if I’m honest on the Wednesday, I was really beating myself up. We’d only managed to do about 28 miles on the Tuesday so we had a bit of catching up to do. We woke up in the early hours and actually ran for the first 12 miles, just not carrying the BA sets for that part – but still in full fire kit. That day ended up being 40 odd miles.

“I just kept thinking of why we were doing it, there was so much encouragement and it just made you think ‘come on, there’s people a lot worse off than me’.

“The amount of people you meet along the way is amazing. You get people coming out of coffee shops and offering your drinks on the house. Everyone was great.” 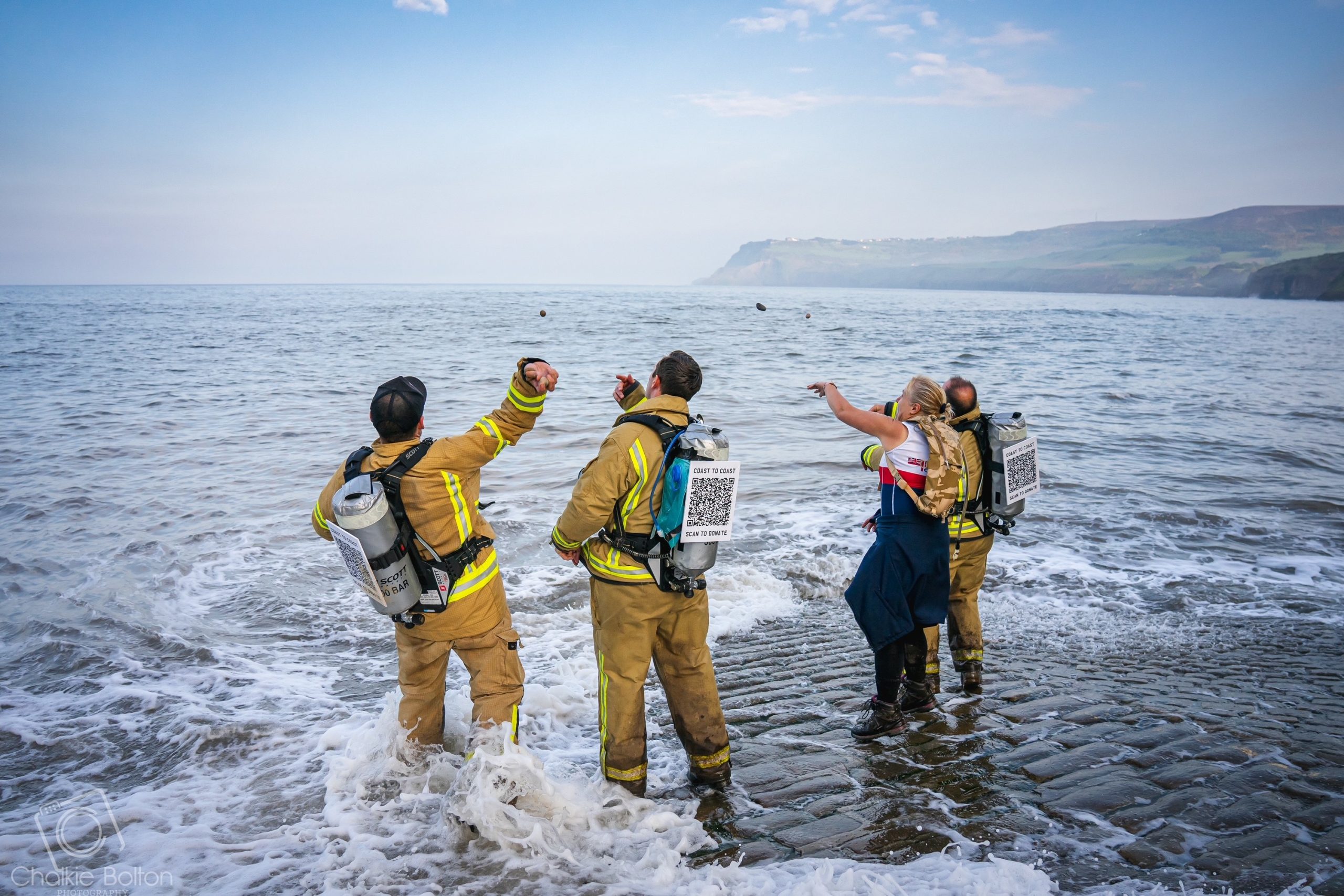 Despite being on track, Joey said he struggled more than ever on the last day, as an infection from a blister he’d got en route began to spread up his leg.

“I got really bad blisters on my right foot on the Wednesday and on the Thursday we went through quite a boggy patch on the Moors, making my feet really wet, which I think is where an infection started,” he says. “That then tracked up my leg and got past my knee.

“It started really hurting towards the end of the walk and I noticed like an egg on my shin, with my knee blowing up to twice its normal size. It turned out it was a bit of sepsis. 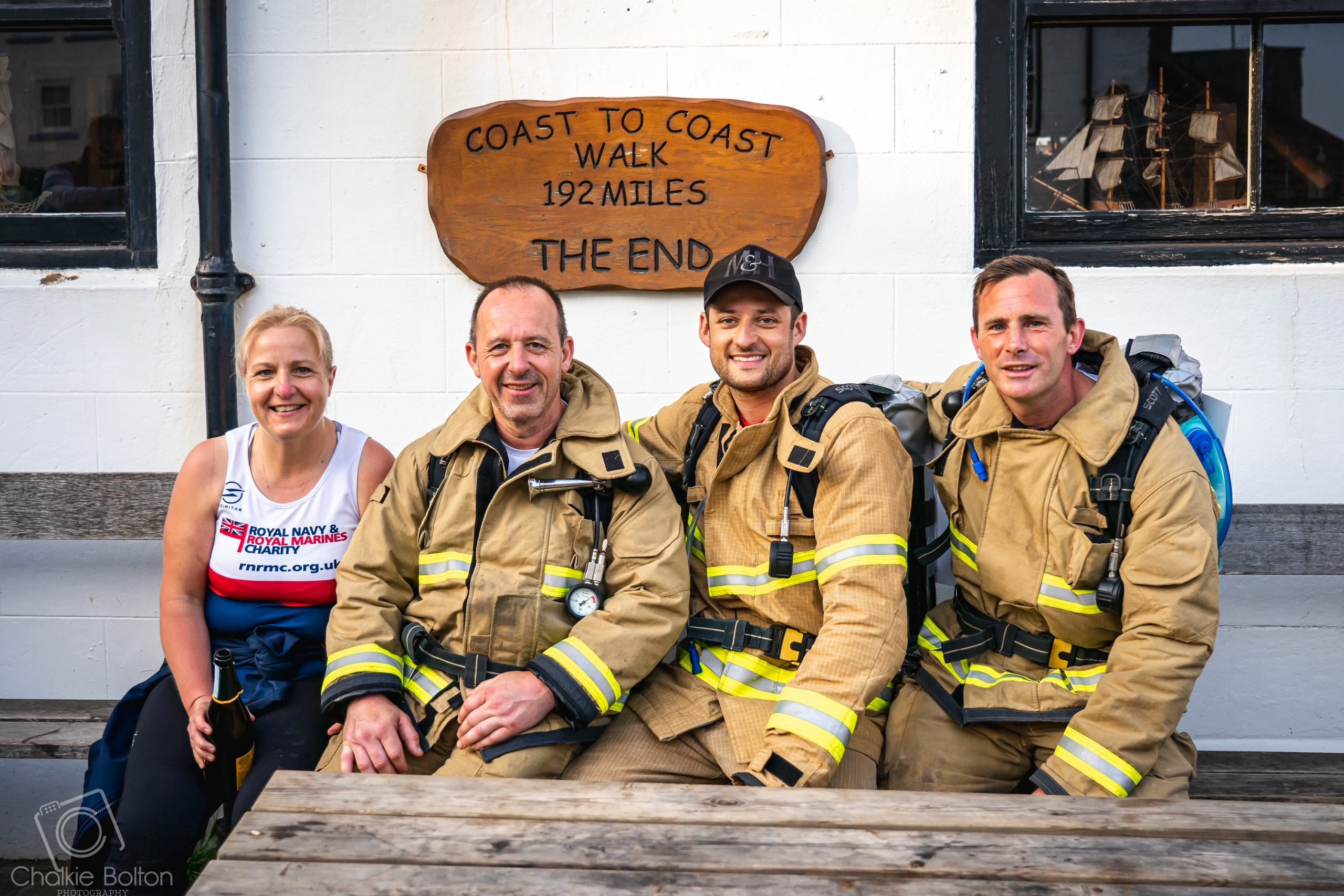 “I think the fact I knew I was proposing kept me going. Then there’s a massive decline into the final bay and that absolutely ruined my leg. I was literally dragging it behind me, slowing everyone down, but they all stuck back and waited.

“Luckily I went to the hospital the day after we finished and they managed to catch it and put me on antibiotics with my foot up for two weeks, meaning two weeks off work while I recovered.”

Joey now says he’s planning another challenging fundraising event next year in aid of the Charity, and would encourage anyone else considering it to go for it. 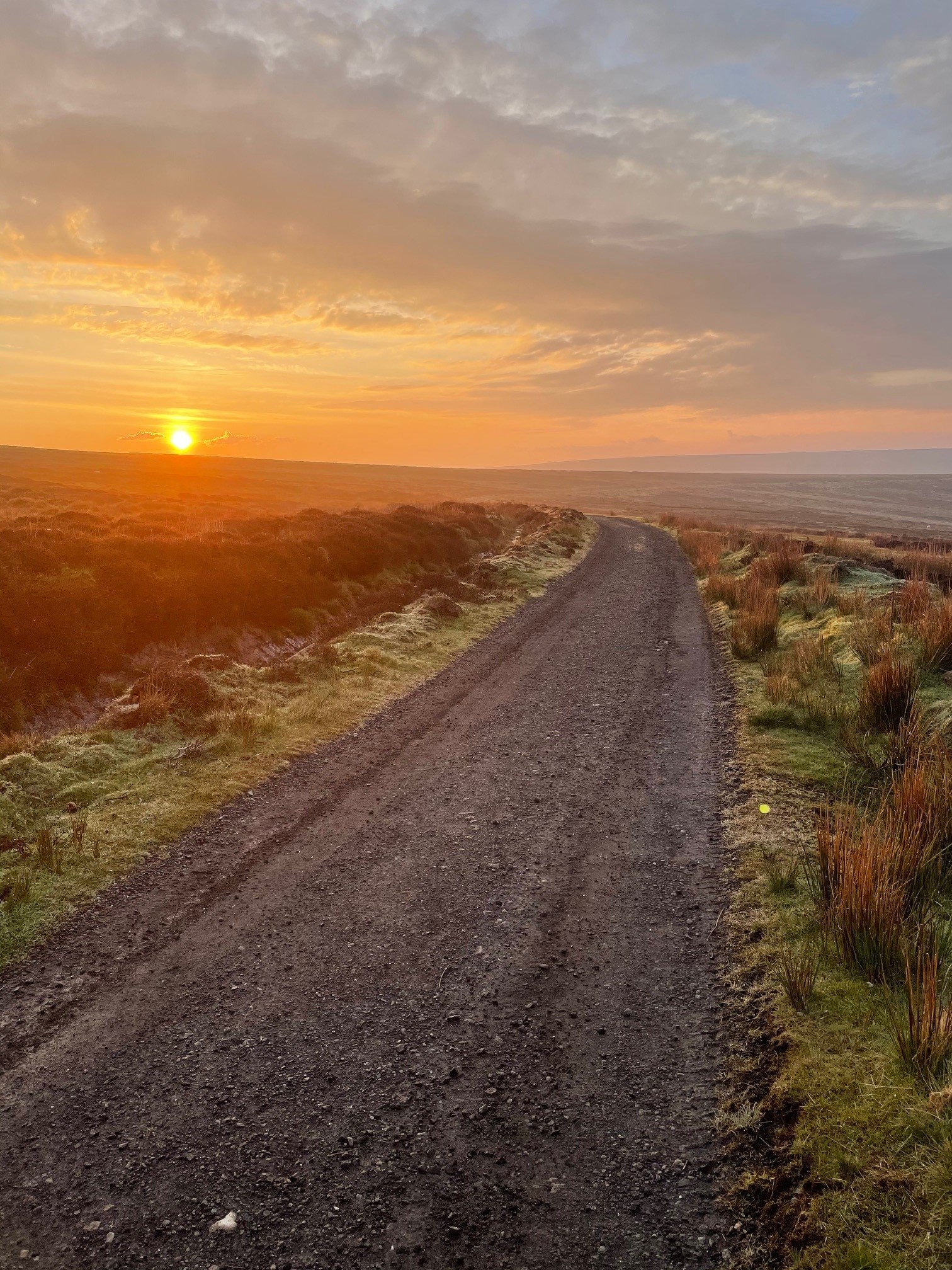 “It goes without saying that the support the Charity provides can be lifesaving,” adds Joey. “Knowing it’s there if I ever need it is happy days!

“On a final note though, the walk would not have been possible without Phil Riley, who was the man behind the support vehicle meeting us at various locations. He was invaluable.”

Joey’s fundraising page is still open for a few more days if you’d like to donate. You can visit it here.