When given the opportunity to take part in a charity jungle trek through the Amazon Rainforest in search of The Lost City of Colombia, Chris Bisson knew who he wanted to raise money for.

As a wholetime firefighter with Guernsey Fire and Rescue Service, Chris has seen colleagues who have been supported by The Fire Fighters Charity, so decided if he was going to hike for five days through the jungle, he wanted to do it for us.

Alongside his duties with the fire service, Chris also has a travel business franchise, and was invited by the company’s head office to take part in the trek in October this year. He shares his travel diary with us, taking us with him every step of the journey through the darkest depths of the Amazon Rainforest to the Ciudad Perdida, otherwise known as The Lost City…

This is Chris’ story. 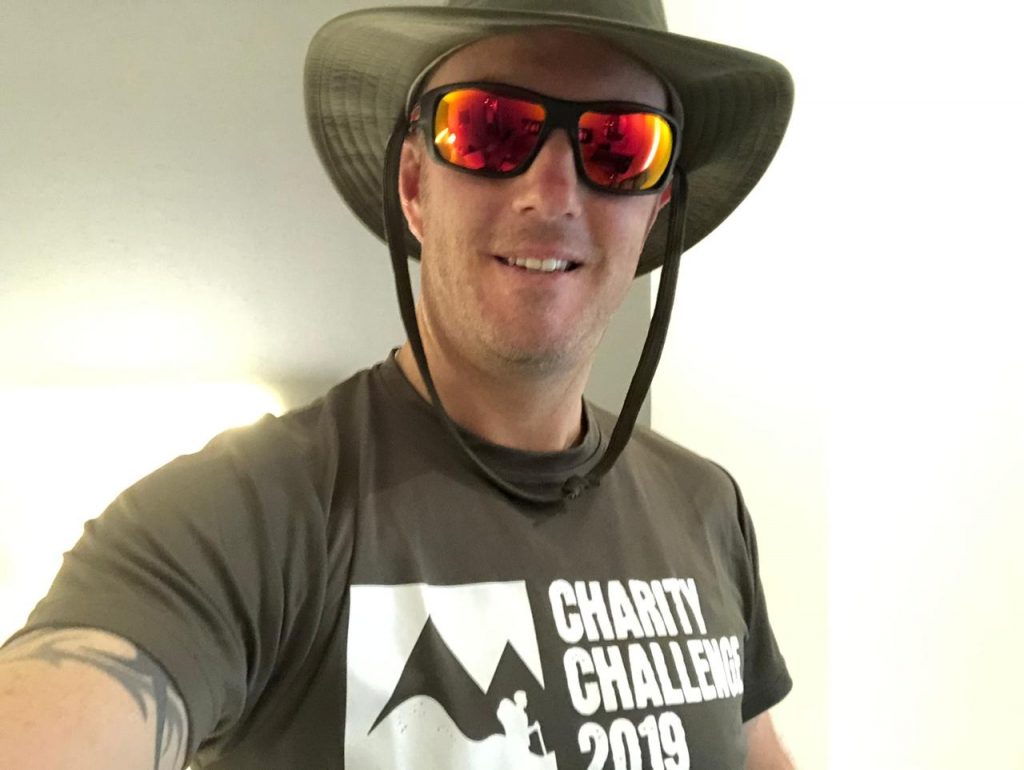 The group – which comprised of 48 business owners and Not Just Travel head office staff – flew out from London Heathrow to Bogota via Toronto on Tuesday 2 October. After one night in Bogota we all flew north up to Santa Marta on Colombia’s Caribbean coast. This is where we would be based before and after the trek. The 48 were split into two group of 24 (normally a trek group for The Lost City would consist of 12-16 person so the logistics were a bit of a challenge!) 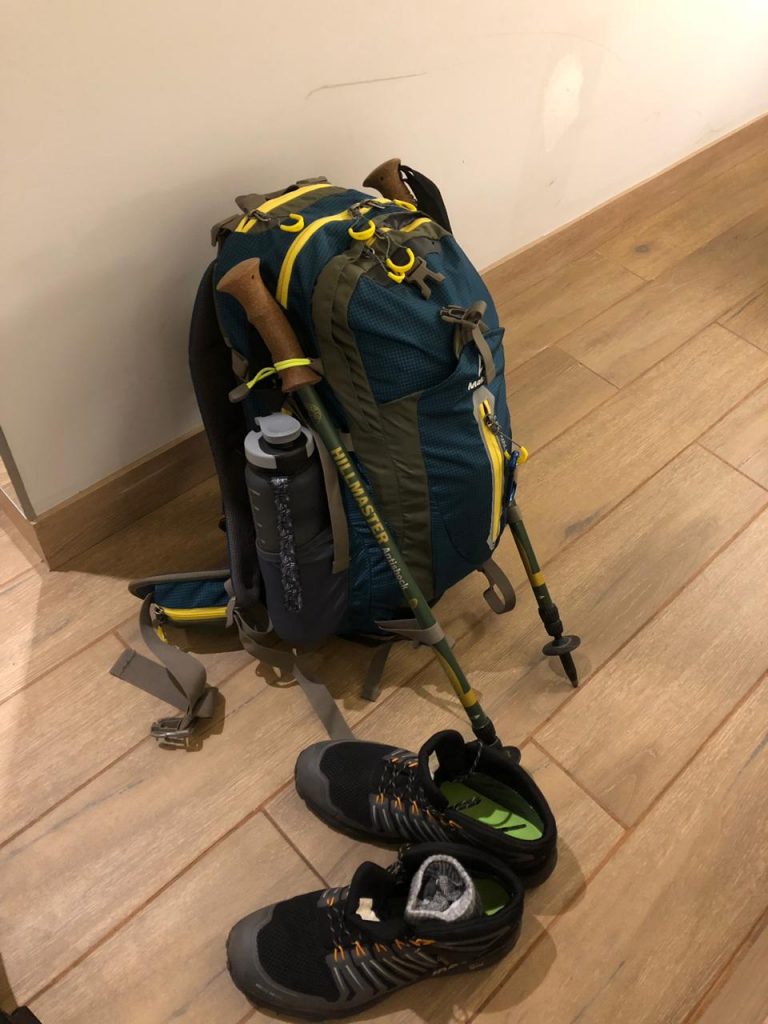 After spending one night in the lovely five-star hotel we were up bright and early at 4am to make sure everything was in order before departing for the jungle in three Land Rovers. One smooth hour on the roads followed by an hour on some very jungle dirt roads to get us to our starting point and the six-hour trek ahead of us. 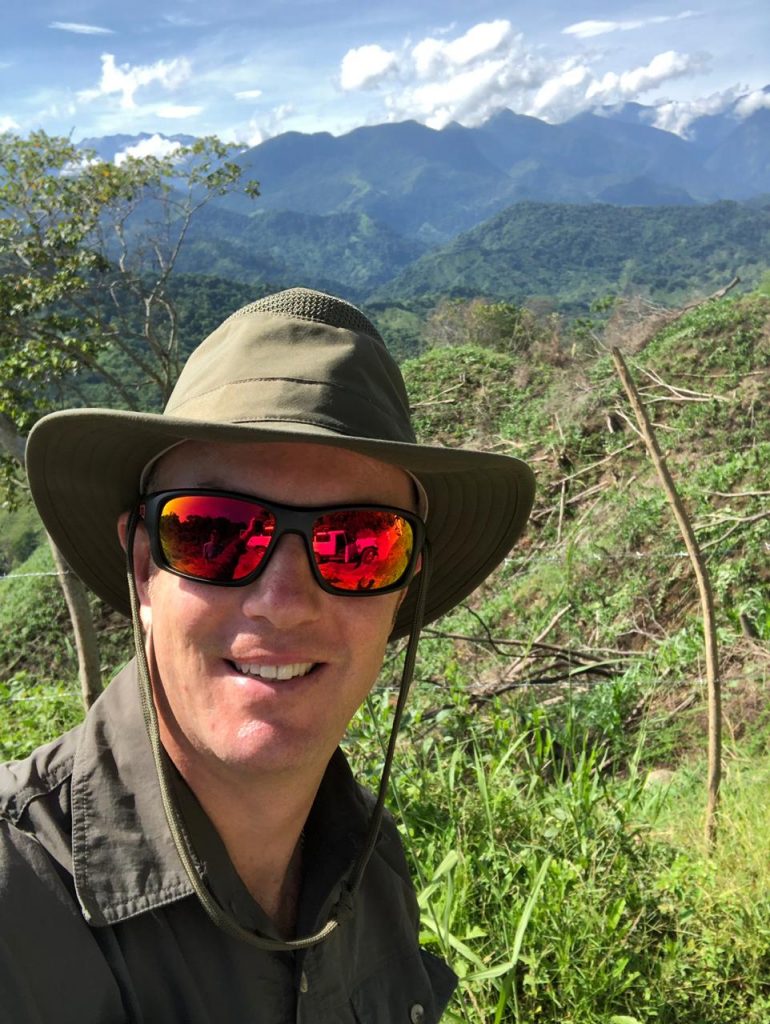 Fed and watered in a local restaurant, we were ready to set off. It was only 8.30am but you could already feel the sun’s heat rising as we started walking into the jungle. The first day was entirely uphill, with no shade from the sun and was incredibly hot… I think quite a few of the group got a shock during those first few hours, as it was really tough, and the group started to spread out more than we should have.

By around midday, the front runners got to our first camp and started getting rehydrated, which is a must in the jungle. Once everyone had caught up we had lunch, which went down very well. While we prepared to move onto our second camp, a huge storm came in, and our guides pulled on the plug on any further trekking that day. We were disappointed at the time, but after seeing it come down for a few hours, it was clear it was definitely the right decision as the conditions got extremely dangerous.

So we spent the night in that first camp, which was very basic. It was quite funny, as we were joined there by another group who were making their way back from the Lost City, which contained one of my clients for whom I had booked the trip when he’d heard I was doing it! 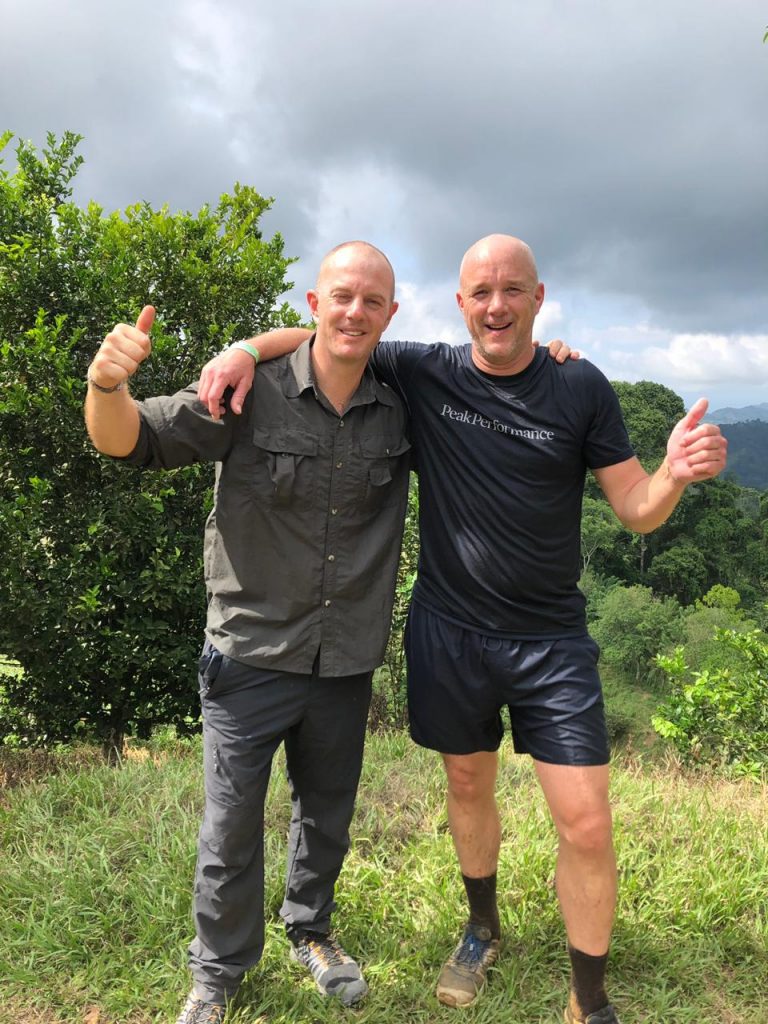 We had a reminder of the dangers of the jungle during our first night, as one of the guys got bitten by a scorpion which apparently had been under my bed. I’ve never moved so fast! His arm went numb and our guides were very concerned it was a deadly bite, but luckily they realised it was only a baby, so wasn’t life threatening.

Our plans for an early departure had been slightly delayed by this excitement, but we eventually set off at 6.30am to make the five-hour trek to camp two. 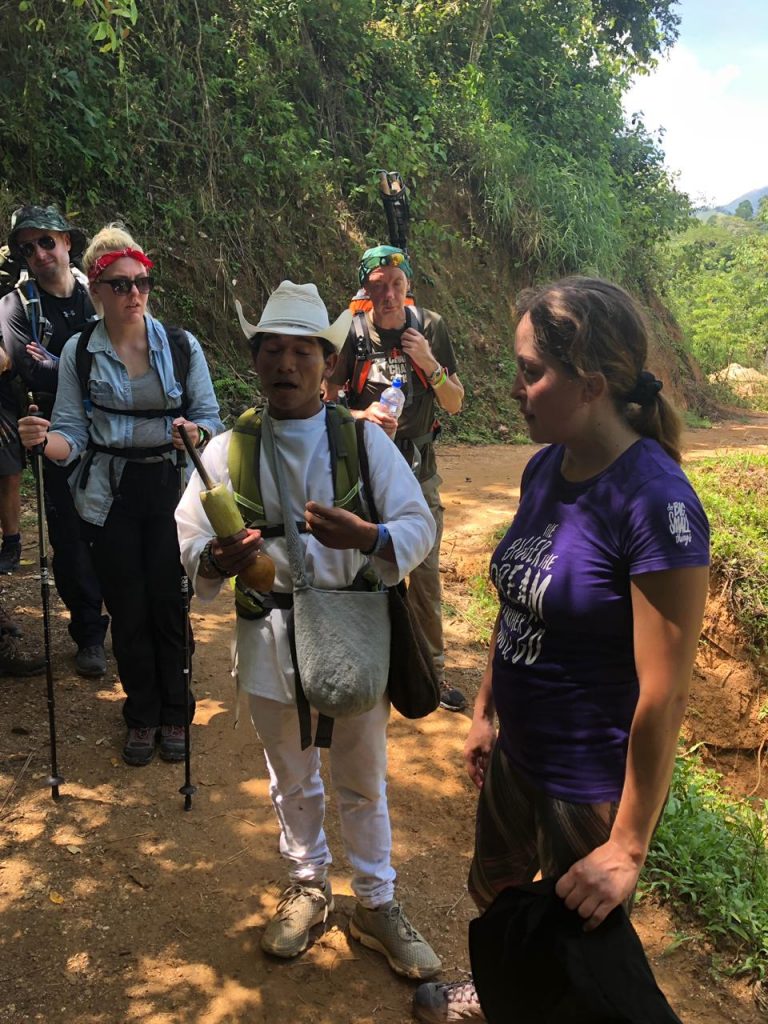 This leg included a gruelling two-hour climb during late morning and a steep clay canyon descent down to a river crossing. It’s hard to describe the terrain; we were mainly following a path cut out of the jungle, but it was hard going, as it was always muddy from the rain and you were carrying all your gear on your back. I’d wanted it to be hard, but I didn’t realise just how hard it was going to be.

We made it to our second camp, but realised that some people in our group were really struggling, and when they eventually joined us, they looked shattered and broken. It didn’t look likely they’d make it to the Lost City, nor would we if were always walking to their pace, and a conversation was had about them continuing. It was hard, because we’d gotten to know them well by this point and we were all there for our different charities, but after a few tears eventually everyone agreed enough was enough and they had to turn back. Our guides arranged for the four who would be leaving us to make the return journey back out of the jungle, this time on mules.

Another huge rain storm came in after lunch, and once again it was felt it would be unsafe to carry on. So we took advantage of the camp’s facilities and cleaned up our kit before heading to bed reading for another early start the next day. 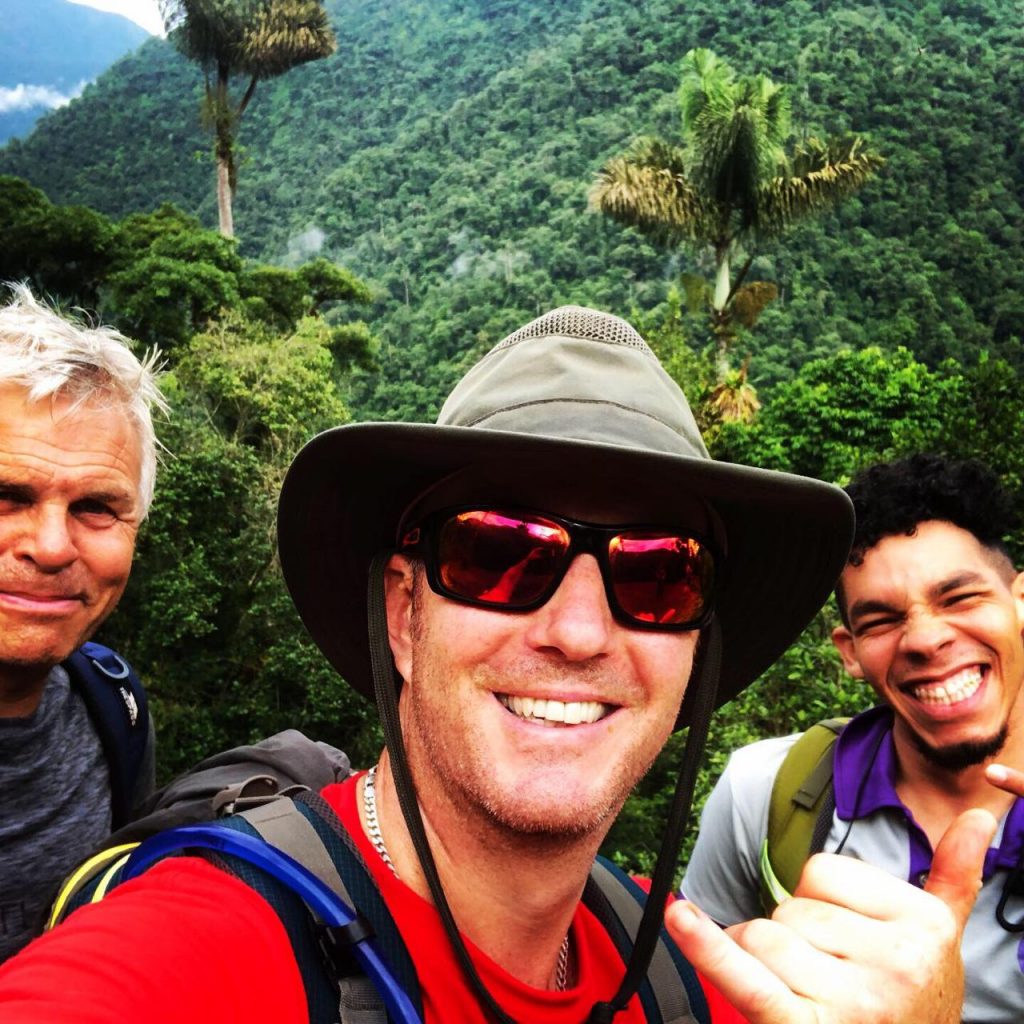 Another 4.30am wakeup call. Our guides had estimated it would be a six-hour trek, but with our new pace, we made it in around four and a half. It was tough going, but we all felt really good upon arrival to our next camp, aptly named Paradiso.

This was the closest camp to the Lost City, which we would be heading off to at the crack of dawn, so we had the afternoon to enjoy a bit of a rest, swimming in the river to cool off, socialise with some of the other trekkers and enjoy a well-earned few beers. 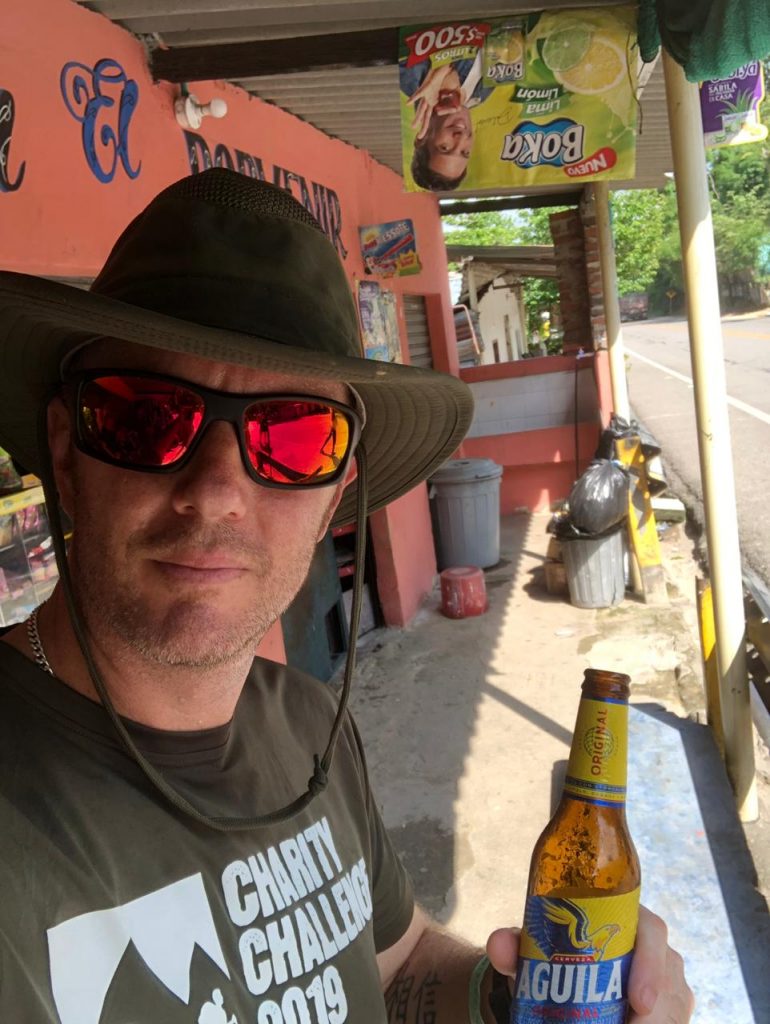 It was definitely the nicest of all of our camps, with man-made wooden structures with beds and mosquito nets, so you felt like you were sleeping in a little cocoon. Not that I struggled to sleep in the jungle, you were so shattered by the end of the day, I slept like a log.

Lost City day. And the longest day. We started early (for a change) and with an hour-long trek that included crossing a fast-flowing river on ropes, then climbing over 1,200 steps roughly cut into the side of the cliff. I’m not sure you can really call them steps, as they were very dangerous, huge and really hard to climb, with no room for error. If you’d have slipped, you’d have been in serious trouble. 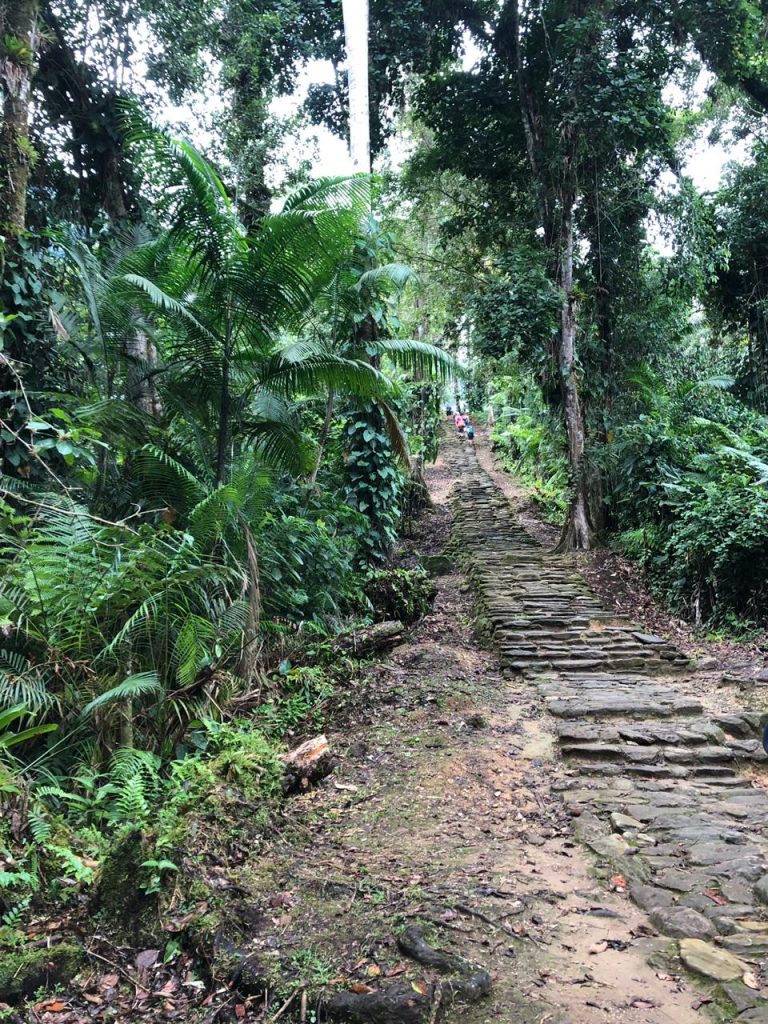 Some members of the Colombian Army were on guard on the ascent not only to assist anyone in trouble, but also to protect trekkers from paramilitary groups in the jungle, as guides and groups have been kidnapped from the spot in the past. Luckily, we didn’t see anyone, and everyone made it safely to the top for hugs and celebrations. 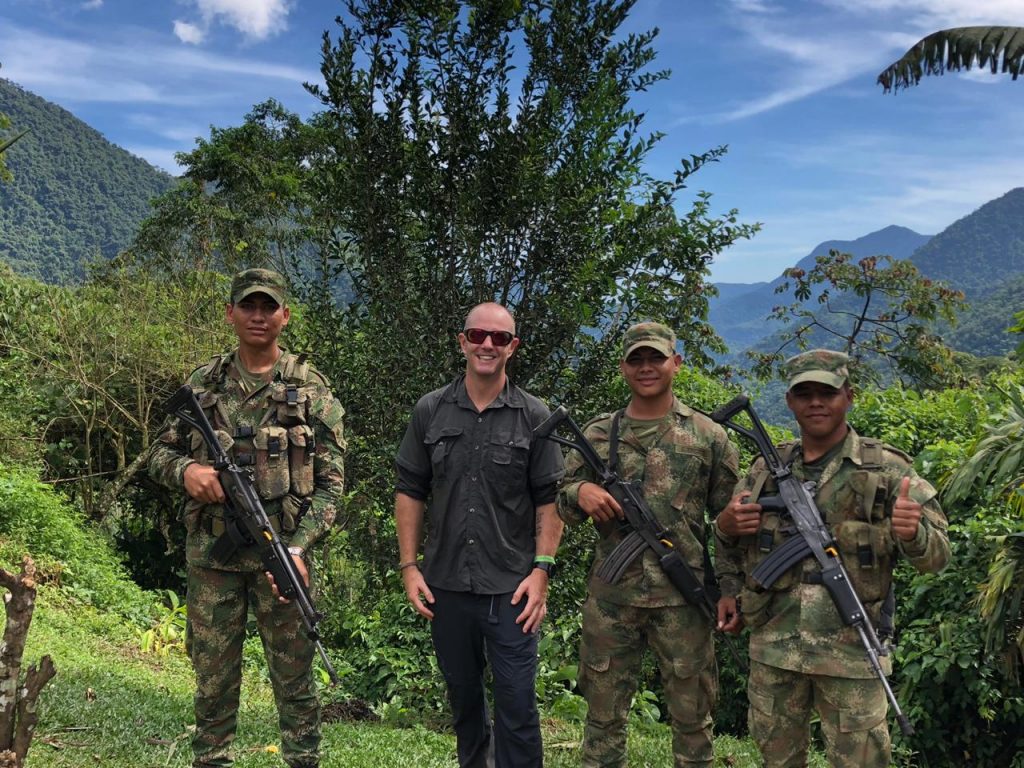 After three and a half days trekking, we had made it. Or so we thought. Nobody had told us that once we’d had our Lost City passports stamped, there were another thousand steps to climb. 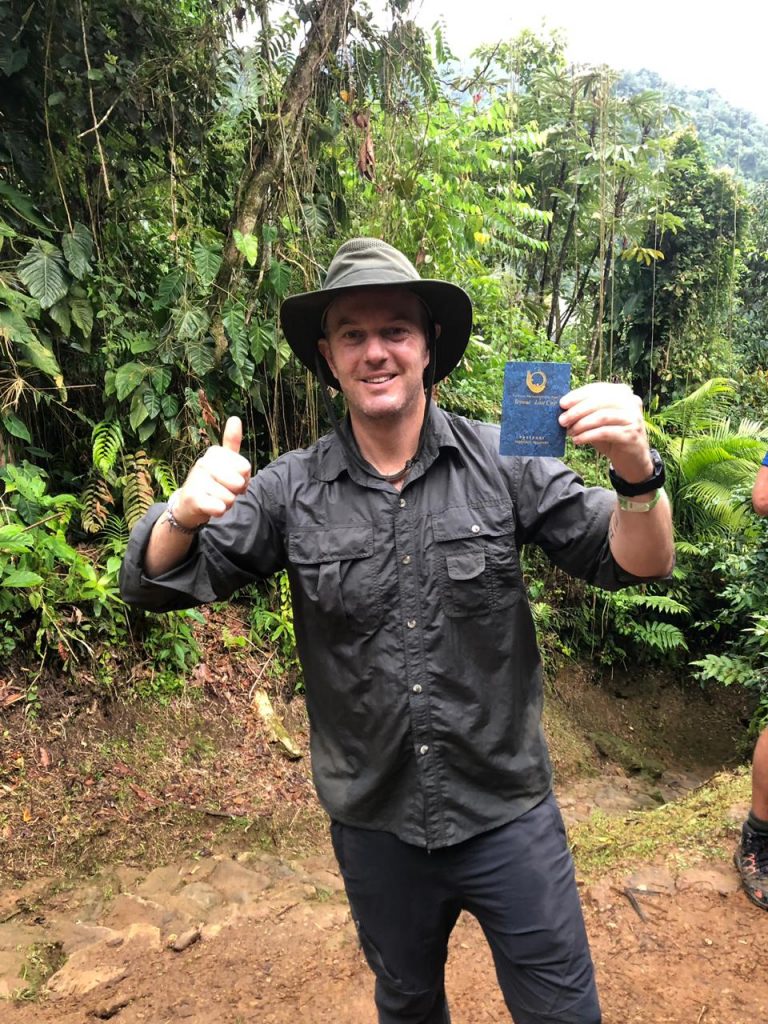 But then we really did make it to the top, and the views were absolutely amazing. We spent about three hours exploring this ancient sacred city. It’s a deeply spiritual place for the indigenous people, and only part of it has been excavated, and there is apparently a lot of ancient gold still buried there. Apparently if you walked two hours in either direction you’d get to buildings from the city buried in the jungle that haven’t ever been uncovered. 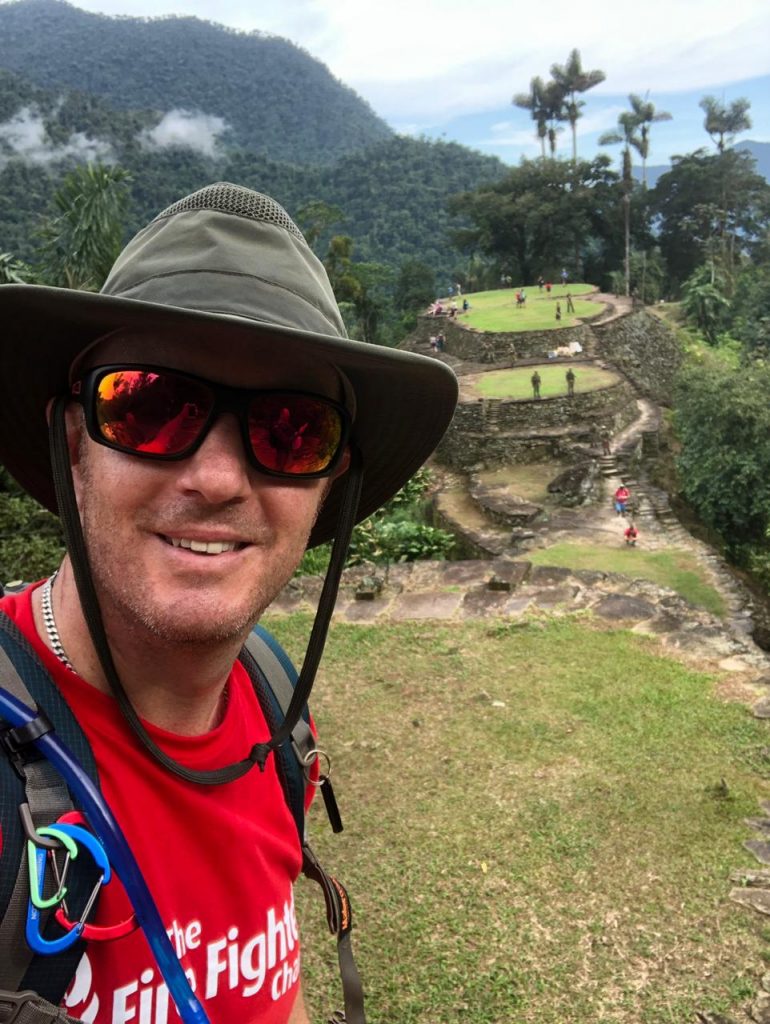 Walking around, you’re just blown away by the peacefulness of it, the views and the stunning place. Words cannot describe just how spectacular the views were. Some people still live there, but there’s nothing there but trees and greenery. We were also incredibly lucky because the day we were there was the day of the Colombian Army’s monthly supply drop off and we had the perfect view of the helicopter landing and offloading its supplies. 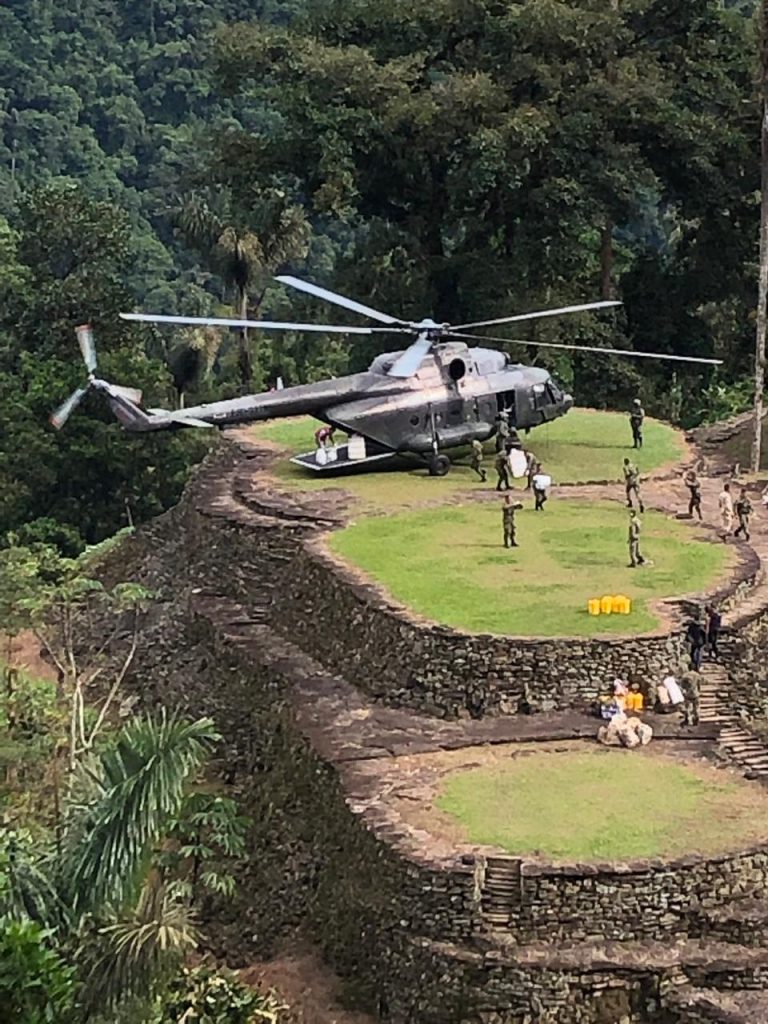 Soon it was time to leave and head back down the treacherous steps and across the river. We made it back to the camp and had some lunch and prepared for another long hike back to our previous camp. We made it in record time, and myself, two others and our guide actually ran the last three miles. The Adrenalin was definitely pumping that day, despite being awake for 12 hours already.

After about four and a half hours, we’d made it to the next camp and all stripped off for a swim in the Amazon river. After making it to the Lost City, that was definitely my highlight of the trip. The water was so cool and refreshing, and we were messing around jumping off rocks. How often does a firefighter from Guernsey get to swim in the Amazon? 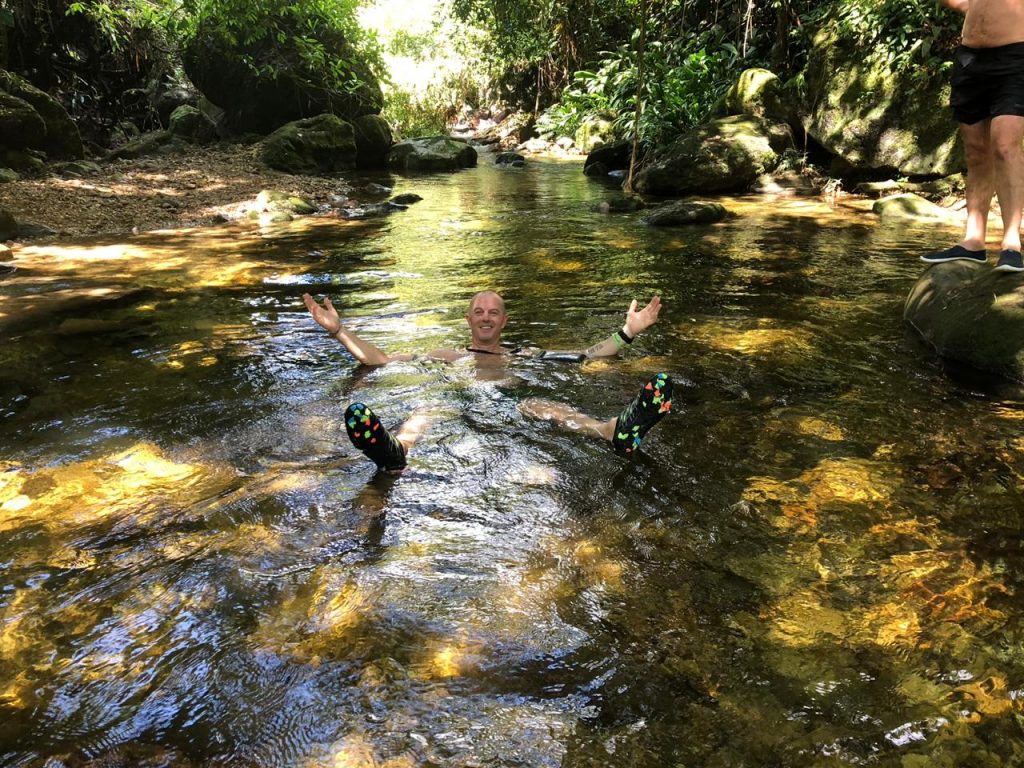 Our final day started with a gruelling ascent up the almost-vertical clay canyon, which was incredibly steep and tough going. We kept pushing through, and although at times I wanted to stop, I kept going.

That was the thing about the trek: so often you were shattered and pushing yourself harder than you ever had, but you always found more energy from somewhere, knowing how much harder it would be to start again if you stopped. I’m pretty strong mentally, and we’d become like a family encouraging each other and helping carry each other’s packs when people were struggling. 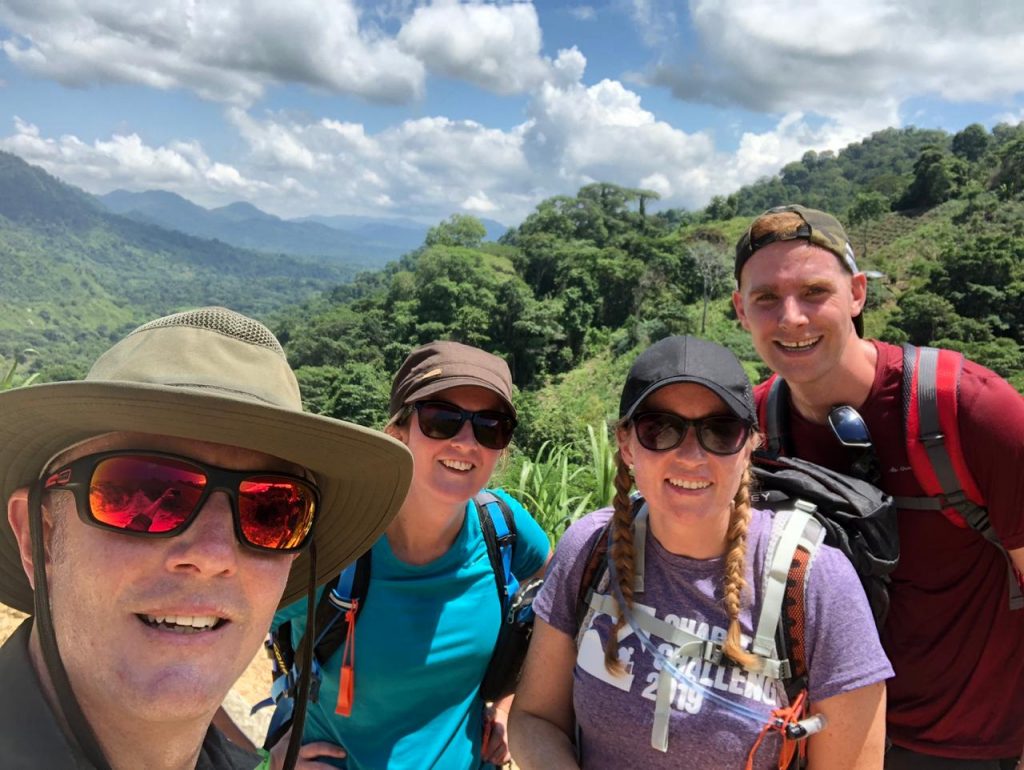 At the top of that hill, we were all shattered, despite it only having been an hour since we’d set off. We were given fresh watermelon and pineapple by local people, then completed the two or three hours back to our first camp, where we’d spent our first night. We had a quick break and some cake, and then carried on. You knew by this point the hardest part was behind you and it would be downhill the rest of the way, even though it was back in the direct sunlight once more.

We made it to the bottom around midday and stopped at a little local restaurant for a celebration meal. It was quite emotional for all of us, we’d done the walk for different reasons but we’d all got through it together.

We were collected by jeeps for the two-hour ride back to the hotel for the best sleep of my life, before going for a big end-of-trek party the following day, before we all went our separate ways to make our journeys home.

I’d never done anything like this, but it was an absolutely incredible experience. You pushed your body further than you’d ever done and achieved this massive thing. 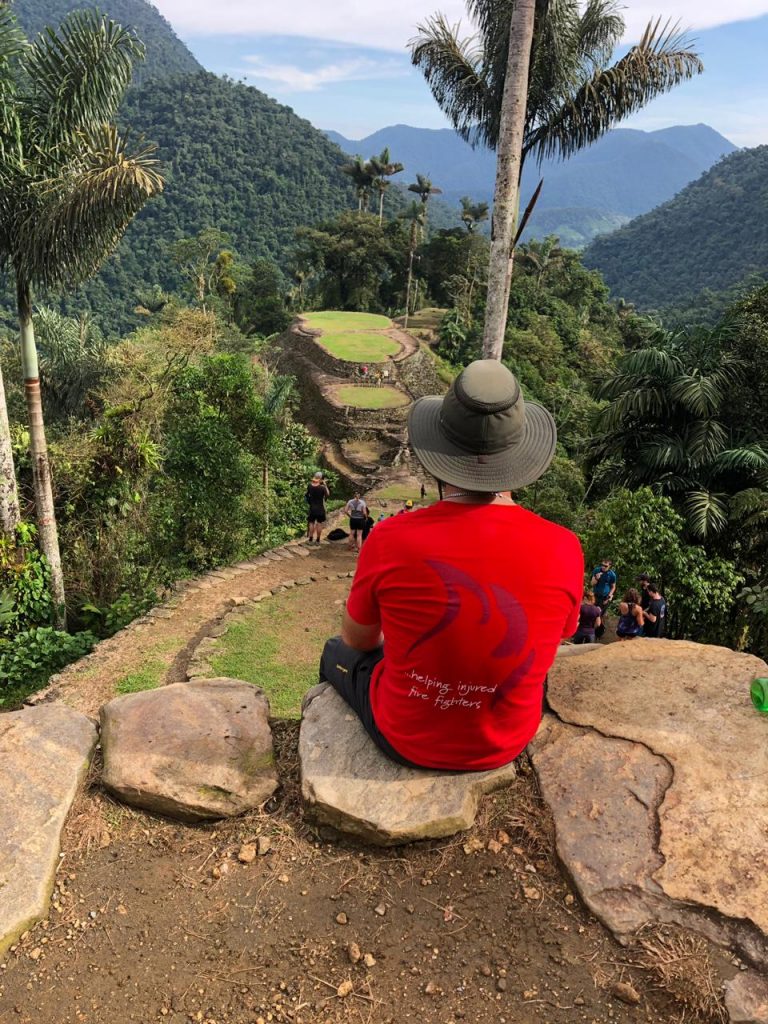 Being surrounded by the Amazon Rainforest was just amazing. We saw so much wildlife and met some amazing people. As well as scorpions, we saw snakes and lizards, and even some fresh jaguar paw prints at one point. Sometimes, walking down banks with holes in the side, guides would stop and point out rattle snakes hiding in the holes. It was such a cool experience.

I was so supported by my local community back on Guernsey and everyone followed my progress. When I got back, I spoke to some of the local press about what the trek and even appeared on the radio.

I’m just happy to have been able to do my bit for The Fire Fighters Charity. I had also arranged a charity quiz night before my trek, and combined with that and sponsorship, I’ve raised over £2,000, which is more than my target. It’s just great, and I hope the money helps injured fire personnel get any help they need from the Charity. 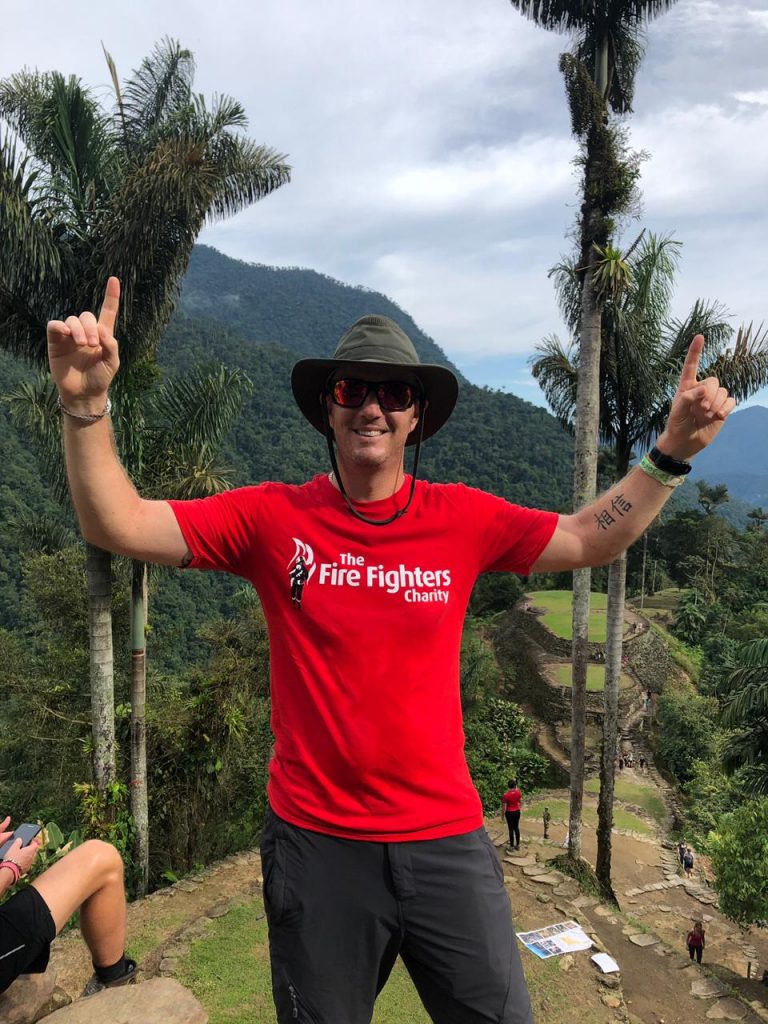 It’s not too late to donate to Chris’ fundraising, and you can do so via his online donation page.