Time to increase my bike training! That’s how I felt when I knew I would spend four days cycling a route that included some of the famous Tour de France climbs, reaching the peak of Col de la Faucille – 1,323m above sea level – halfway through the final day.

I live an active lifestyle and, as a firefighter, take pride in keeping myself fit and strong, but I had to adapt my training to ensure success. I started by extending the time and distance I spent in the saddle to increase my endurance, then went on to improve my hill climbs: killer at the beginning, but I learned to love the hills and scenic Purbecks where I was training. Below is my trip diary. 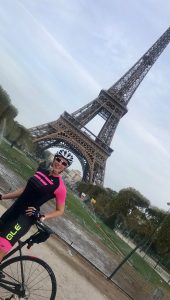 Sunday, 9 September. Getting to Paris

Finally packed, prepared, smiling from ear to ear and feeling super excited, I headed to St Pancras station to meet some other cyclists taking part in the challenge. Following a rather hectic journey, we made it to Paris on the Eurostar. Unfortunately, our bikes, which had been transported via ferry, were delayed and didn’t arrive until 10pm, so it was a late night for us to get them ready for the morning’s ride.

An early start from Paris. It was quite slow going through the pretty streets, due to numerous traffic lights, but so lovely to take in the sights from the bike, including the Eiffel Tower. A brilliant first day’s riding, covering 80 relatively-flat miles with a few hills towards the end of the day.

At 31 degrees Celsius, today’s was a rather hot and hilly ride. I enjoyed the beautiful scenery as I cycled through the Chablis vineyards and towns, finally reaching the pretty medieval town of Semur-en-Auxios with its towers and striking Collegiale Notre Dame sat above the town. I felt good on the bike, and the highlight for today was achieving two ‘Queen of the Mountain’ awards on my Strava tracker. We cycled 85.8 miles and achieved a total climb of 4,242 ft. 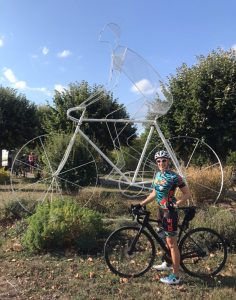 Today was the longest of our four days in the saddle. My legs and bum were a bit achy and sore today. I still felt strong in the bike, but more hot temperatures made it tough going. We headed through a town called Bligny Ouche, aptly named as it was right before a 6km hill climb, but, what goes up, must come down! The Jura mountains were challenging but beautiful, and I’m proud I can now say I’ve cycled some of the Tour de France route. I can’t believe I only have one more mountainous day on the bike and then we’re at Geneva. Our longest cycle yet, covering 100.6 miles and 4,232 ft climbed.

The final leg! And some BIG climbs today. It was a chilly, damp start in the Jura, starting with a large hill from mile one, where I somehow managed to achieve another award on Strava. Some of the roads were a little busier, but once in the mountains, the views were spectacular, and the perfect distraction from my aching legs. Torrential rain and gusts of wind made things challenging at times, as it required serious concentration, especially on – at times hairy – winding mountain descents. 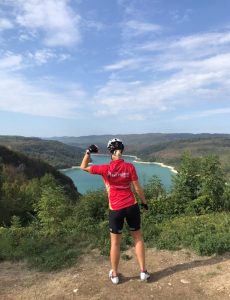 We cycled over an impressive bridge at Pont de la Pyle where the waters of Lake de Vouglans were the most incredible, majestic turquoise. Definitely the most picturesque day. Of the 73 miles we cycled today, the longest climbs were two 11km ascents, promptly followed by a final, leg-burning, 7.2km climb. The thought of being so close to completion definitely kept me going, as did the awesome individuals I met on the ride. The descent into Geneva was spectacular, and seeing the finish line at the lake was incredible. 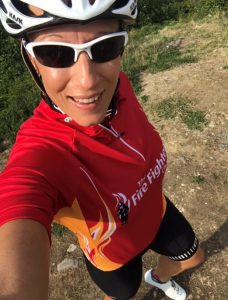 It has been an amazing experience, and I am so proud of myself for completing it. Yes, it was tough, and was both a physical and mental challenge to get back on my bike each day, but wow, I loved every sweaty minute of it. Plus, thanks to fundraising and kind donations, I have now raised £2,271.50 for The Fire Fighters Charity.

Many of my colleagues and I have used the Charity at some point. It is reassuring to know this fantastic support is there to help us should we need it. Knowing the Charity is almost entirely funded through donations from the fire community and public, I undertook this challenge to fundraise and give something back. I am so grateful for everything they do.