The team decided to do the climb to show their support for all the crews and fire and rescue personnel impacted by the North Kensington tragedy in June of this year. More than 250 firefighters and 70 fire engines from stations all over London and the South were involved in efforts to control the fire, rescuing 65 people from the 24-storey tower block, where at least 80 people are believed to have died and over 70 people were injured.

Scafell Pike is the highest mountain in England, at an elevation of 978 metres (3,209 ft) above sea level. It is located in the Lake District National Park in Cumbria, and is part of the Southern Fells.

Paul Clements of Egremont Fire Station said; “The weather was awful, and gave us very little time at the summit, as we could hardly even stand up, but we were determined to get there and support our Charity.” 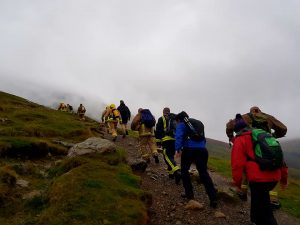 The team climbing up to the summit.

He continued; “It was fantastic to have firefighters from all different locations participating, all coming together for The Fire Fighters Charity and to recognise the bravery of our fellow firefighters during the Grenfell Tower tragedy.  We would like to thank all our friends and family that supported us at the event and with our fundraising too.”

You can donate here via the team’s JustGiving page.

Real life case studies and stories from our beneficiaries.