The last month has seen some incredible fundraising events from our dedicated supporters – and we want to say a huge thank you to each and every one of you.

Without you, we simply couldn’t continue to do what we do every day. Whether it’s been running, cycling, climbing in memory of those who lost their lives on 9/11, open days on station or even jumping out of a plane, you’ve gone above and beyond over the last four weeks to raise funds for the Charity.

The world came together one week ago to remember all those that lost their lives in the 9/11 terror attacks – one of the worst firefighter disasters in history.

They made it! 👏👏👏 A massive well done to the @LongestRide2021 team for completing their epic journey and smashing their target. We're so proud of you all. THANK YOU! 🧡 #firefamily https://t.co/ra66DLfP0k

Good luck to our firefighters who today are set to scale Scafell Pike, England’s highest peak, in full firefighting gear, including breathing apparatus. The climbers, mostly from Grangetown White Watch, are raising money for @MindCharity and the @firefighters999. 🧑‍🚒🧯👣 pic.twitter.com/wgf2oAVbx9

And there we have it – all the team are down safely. What an amazing, exhilarating experience and loads of money raised for the @firefighters999 along the way. It’s not too late to sponsor https://t.co/DM4FyimasA pic.twitter.com/S1r1oKMXAk

A big thanks to the @KnutsfordFS crew and to anyone taking on a challenge this week for our Charity. We think you're all amazing. 🧡🙌🔥 @MaccFire #firefamilychallenge #firefamily https://t.co/ykb34JASJ3

We have completed our challenge of the Yorkshire 3 Peaks. The target was under 10 hours. We managed to get under 9 hours. Raised £1285 for the Firefighters Charity. Thankyou to everyone who has donated. 🙏 @firefighters999@Southsea24 https://t.co/oYsbCXBfmb pic.twitter.com/4y4pGcHFKJ

Finished Coast to Coast for Firefighters Charity. Over 95 miles in 5.5 days. Thanks for all your support, likes and comments along the way and donations. https://t.co/2Cjkp8vyKV @FFCDebbieR @firefighters999 @adambromley12 @WestMidsFire pic.twitter.com/0d5wd4gJYJ

Congratulations to Joe, Rich and Alex from @WMFSWoodgate who completed their 3 Peaks Challenge over the weekend for @firefighters999 raising over £1000.
There's still time to donate here: https://t.co/gZWcnvC5Ja pic.twitter.com/glkfmEwUuD

We had an amazing time at #FestivalofRescue – thanks so much to @_ukro, @Tyne_Wear_FRS and to everyone who attended and took part. It was fantastic to see you all. 🙌🚒 #firefamily #community #thankyou https://t.co/lZjtE6vz8d

My @NFCC_FireChiefs colleague Sarah Brown is fundraising for @firefighters999. Check out her @JustGiving page and please donate if you can. Thank you! #JustGiving https://t.co/VObJLBEcRE

Job done ✔️ 1:51 ish. Thanks to everyone for the words of support and of course the donations to a fab charity. Very much appreciated, off for a well earned pint or 2 now. What an amazing run and atmosphere, thanks to @firefighters999 for giving me the chance to take part.#GNR40 pic.twitter.com/2Jer0xIKRd

Great to be watching the Charity Rugby match @StaffsFire today – passion & commitment from all playing tremendous to see @firefighters999 pic.twitter.com/DLEoNZbOxa

We did it!
Massive appreciation to everyone that has donated.We are overwhelmed by the generosity that people have shown. We have hit our target have more donations coming in so big thanks for the support @firefighters999 @AnthonyNolan @WestMidsFire @bbcwm @WeAreBCR pic.twitter.com/hy5VnqUPEp

Today Charlotte from @Glosfire will be completing an epic wing walking experience in aid of our Charity. A huge good luck to Charlotte and to everyone taking part in a #firefamilychallenge for us. We know you'll be amazing! 💛 @FFCDebbieR https://t.co/cSO3YgZN4b

Good to be a part of Cranleigh's openday, giving sound advice, having fun, and proceeds going to FF charity @SurreyFRS pic.twitter.com/ajy08YhUG3

Only a few days to go until will be competing to win The Blaze Trophy and raise funds for the @firefighters999!

👋 We would love to see you there!

And we did it!! 354 lengths of hose all done in a brilliant time of 2 hours 1 minute.. massive thank you to everyone that donated today we will post and update when we have a final count.. well done to Peter Vince for setting a new record of 41 hoses in 1 hour. 👏 pic.twitter.com/VPQjRVtTDN

Thank you to everyone who attended the open day at Polesworth Fire Station today. An amazing total of £4,221 was raised for @firefighters999
and local causes.

Thank also to all of the local businesses who supported the event, you are all amazing! pic.twitter.com/gsAlsJmxoO

This month, Watch Commander Graham George (Lenny) is taking on a challenge running from Scotland to Cornwall to raise money for @firefighters999 & @samaritans. 👨‍🚒 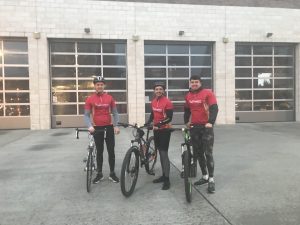 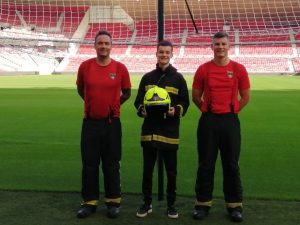