Taking part in the challenge this summer are Team Glide 75, a group of of serving and retired fire service personnel who have served more than 110 years between them.

“Team Glide 75 came about when I first saw the advert for #My75Miles, wanting people to come up with ideas for travelling 75 miles under their own power. Myself and four other fellow pilots at the Trent Valley Gliding Club are, or have been firefighters and thought it would be a great way to raise money for the Charity.” 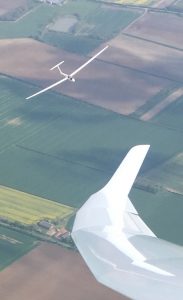 We are all qualified gliding instructors and cross-country pilots. There’s nothing quite like flying without an engine and using the elements in air such as thermals (warm rising air) to cover hundreds of kilometres over several hours. We hope to fly the distance together in single seat and two seater gliders during August, covering as many service counties as we can depending, of course, on the great British weather.

“We all thought it would be a great idea to combine our hobby with raising money for the great work the Charity does for injured firefighters and their families.” 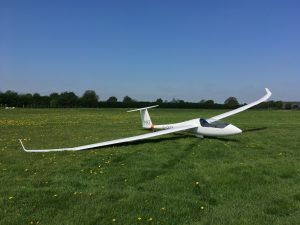 Richard Hannigan, 61, retired Chief Fire Officer at Humberside Fire and Rescue Service, added: “The Charity works hard to make sure that fire fighters can continue to serve their communities even after they have been injured or become ill in the line of duty.” 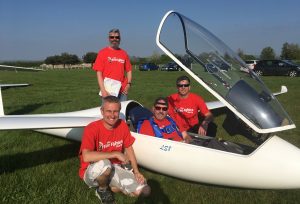 L-R Patrick Holland, standing at the back Larry Lawes, Rois Lorenz in the cockpit and Rick Ballard behind. 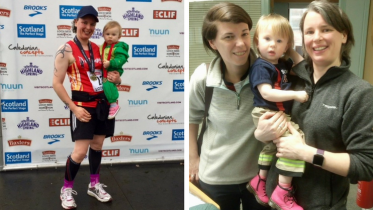 This is #My75Miles: Karla Stevenson

To say thank you for the support she received in 2004, Watch Manager Karla Stevenson is taking part in the #My75Miles challenge.