Sneak peek at our new recruits practicing for their fire engine pull 🚒. Pop down to Humberstone Gate this Saturday 1pm, 2pm and 3pm to see them pull the engine through the city three times for charity! @firefighters999 @Bodie_Hodges #Goodluck #Charity #ThursdayMotivation pic.twitter.com/W5GnKHvTbh

Wow what a weekend! Huge congratulations to our cycling team 🚲☀and new recruits 🚒🚒🚒 who successfully completed their very tough challenges this weekend despite the weather 🌧#Charity #MondayMotivation #Proud #ChaseTheSun @firefighters999 @Bodie_Hodges @TLCentreuk pic.twitter.com/zQ0kPnksal

Sidmouth Fire Crews thanked Penelope, Emily & Michaela for raising £124.85 for the @firefighters999 charity by holding events in their office at Galliford Try partnerships. Michaela is the daughter of a firefighter at Sidmouth Fire Station. pic.twitter.com/LNy2QFW6DF

We are very pleased to say thank you to @EoECoop. They are supporting the @SuffolkFireRide, and @SuffolkFire with a kind donation, which is supporting @firefighters999. Photo by M.Ralph pic.twitter.com/oceWd3ykqj

MY FIRST ULTRA MARATHON … On 7th September 2019 I am undertaking my biggest challenge yet. For those of you who know me you are aware of how much and how far I tend to run…but this is an ULTRA MARATHON! 100kms (62 miles) along the Thames Path from Putney Bridge To Henley. I know, I’m mad. 🤦‍♂️🏃‍♂️ But this isn’t about me. I’m doing this challenge for The Firefighters Charity. Everyday these brave men and women risk their lives to save others and the Firefighters Charity is there to support them in a variety of ways. Whether injured, ill or in need of psychological support they exist to support the everyday heroes of the UK fire community. A 100km run pales into insignificance compared to the sacrifices they make on a daily basis. So dig deep, give what you can and support the UK fire community with me. Go to justgiving.com/fundraising/chriskenrickultra to donate. Thanks everyone! See you along the way. 🔥🚒🏃‍♂️ #run #runner #running #runnerscommunity #runningcommunity #runnersofinstagram #werunthis #ownyourrun #veganathlete #veganrunner #runningmotivation #ukrunchat #runhappy #happyrunner #ukfitfam #firstultramarathon #ultramarathon #ultramarathontraining #instarun #instarunners #runnerslife #runningaddict #runchat #thamespathchallenge #100km #thefirefighterscharity #fundraising

#WestNorwood red watch firefighters are riding over 200 miles in 3 days, from their fire station to Harcombe House in Devon, in aid of the @firefighters999. Please support them if you can https://t.co/J65maWp8IL pic.twitter.com/ieXBEqWB9Y

Hey MTC members – . We’re super excited to give you an update on both April & May’s #Tee4aTee donations, and let you know how your subscription is helping others! . For those who aren’t familiar with our #Tee4aTeeProject just yet, each month that you're subscribed to Monthly Tee Club, we donate an item (or monetary equivalent) on your behalf to a charity/someone in need. . For last months donation, we revisited one of our previous charities – The Fire Fighters Charity. They provide support to the UK Fire & Rescue community through rehabilitation, recuperating, psychological support and health & wellbeing for those in need. . It was great to catch up with Alan & Emma from the charity, and get an update on all of the incredible work The Fire Fighter’s Charity have done over the past year. The guys at Horwich Fire Station were kind enough to show us around the station & the engines, and even let us try on some of their kit! . We were delighted to be able to donate £2429.00 to The FireFighter’s Charity, and continue to support the work the Fire Fighters Charity do, supporting the brave men & women that risk their lives to keep us safe! . . This month’s donation was given to Crohn's & Colitis UK, the UK’s leading charity in the battle against Crohn’s disease and Ulcerative Colitis. . We met with Emma & Dave, volunteers from the charity’s South Manchester Network (Crohn's and Colitis UK South Manchester Network), to learn a bit more about the conditions and the services they provide to support those affected. . They are working to raise awareness about the conditions, by bringing local people together for social meet-ups and support groups, giving them the comfort and confidence to live freer and fuller lives. The groups are open to everyone and welcome people of all ages, backgrounds and different stages of diagnosis. . We’re so happy to be able to support the Charity and donate an incredible £2460.75! We couldn’t do it without our awesome subscribers, you guys are amazing! . Please feel free to share with your friends, family & colleagues to help spread the word about both of these amazing charities & the #Tee4aTeeProject. . Team MTC 🧡

🚒 Last Friday I took part in a charity boxing event 🥊🥊 which was to raise money for the Firefighters Charity & Inspire Boxing Academy ❤️ I won my fight and I had 65 supporters that came to Nottingham to support me #Amazingsupport £850 raised @firefighters999 @DerbyshireFRS pic.twitter.com/KmUuqUBkip

On July 5th, twelve firefighters from Bradford White Watch will be walking 75 miles from Bridlington Pier to Bradford Fire Station to raise money for @firefighters999 and @LymphomaAction – two charities that are close to their hearts.
💷👣https://t.co/kCF7A0lQjf

A post shared by FFC Merseyside (@ffcmerseysidefundraisingteam) on May 24, 2019 at 12:26pm PDT

Setting off at 5am from St Albans Fire Station they made their way our way around the County, trying to raise as much money as possible for The Fire Fighters Charity. Here is their fundraising page: https://www.justgiving.com/fundraising/dan-collier3658 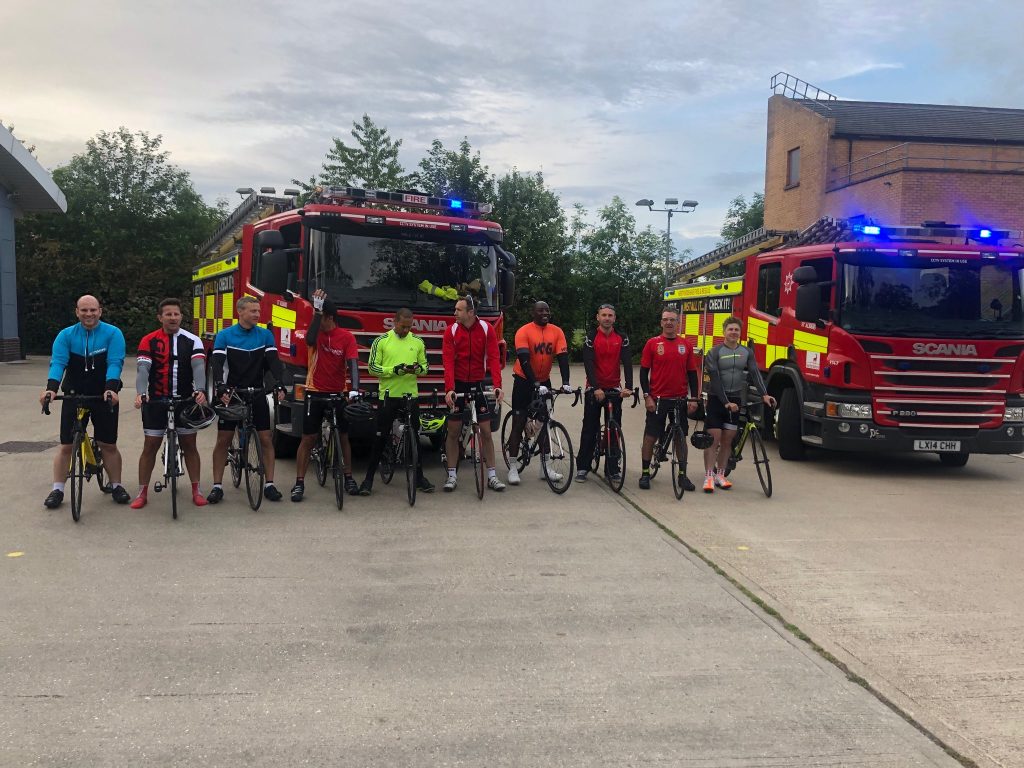 Thankyou to everyone who helped make Raunds Fire Station open day a success 🚒🚑🚔 🍦you are Amazing #VolunteersWeek @ESCadets @firefighters999 pic.twitter.com/BsymZYDPQE

These 3 decided that they wanted to raise funds for @firefighters999 by doing the Nightrider 100k… in full fire kit! Almost 5 hours of riding through London, in the middle of the night but they did it and have raised a whopping £1764.53. Well done! Awesome effort 🚒😍💪 pic.twitter.com/nSy4pUXKVD

PC Luxford is going to be cycling from Land’s End to John O’Groats to raise awareness for mental health in the emergency services. This short video was created to promote his challenge and highlight the issues he’s raising awareness of.