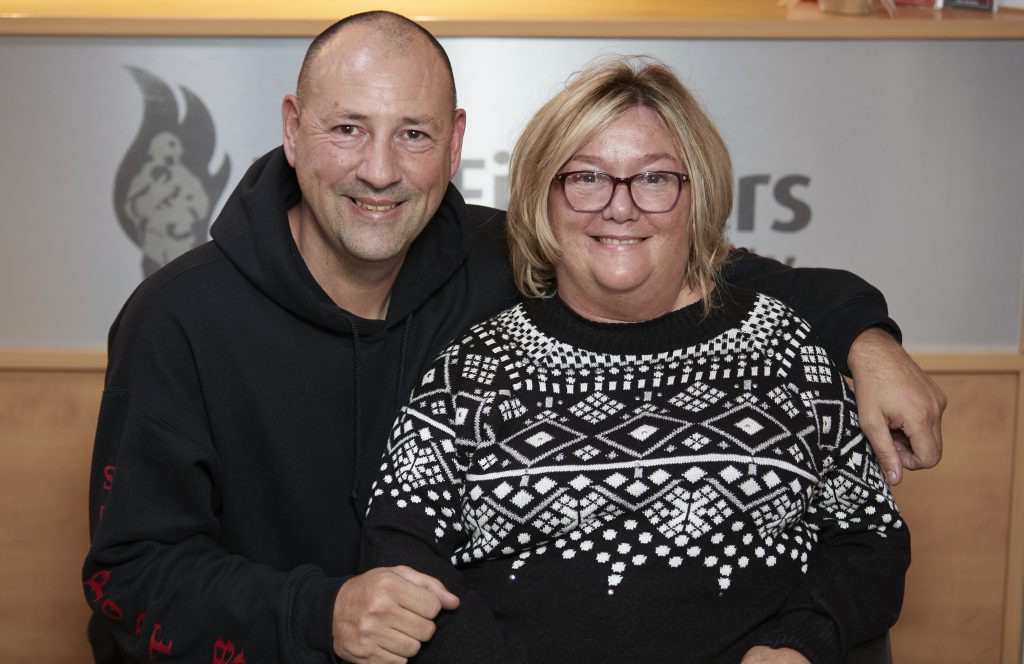 Cheshire firefighter's wife Cathy McBrion was just 53 when she had a stroke while at the wheel and life changed in a matter of seconds. Now she has become a familiar face at Jubilee House, somewhere that she says has brought her out of her shell when her confidence was all but lost.

While driving home from work a few days before Christmas 2015, Cathy McBrion thought her car was malfunctioning when it started juddering out of the blue. Ignoring the headache that had suddenly come on, she carried on for three miles, eventually stopping at a red light. She did not realise that the reason her car was jumping was because she was having a massive stroke, paralysing her down the left side.

“It was so frightening as it just came out of nowhere,” says Cathy. “I thought I was drunk, because the lines on the road went all wobbly. I have no idea how I kept on driving without crashing. Someone was looking out for me that day.”

Cathy doesn’t really remember what happened next, only vaguely recalling a pedestrian running over to ask if she needed help. The next thing she knew, she was in hospital.

Meanwhile, John was busying himself with DIY at home, finishing a task he’d promised to do before Christmas. When his wife’s name came up on an incoming call on his phone, he was surprised to hear a stranger’s voice telling him Cathy had had a suspected stroke just a short distance from their house and an ambulance was on its way to her.

“I remember running downstairs and out into the road, just as the ambulance was approaching,” says John. “I waved them down, and asked if they were going to a stroke victim. They looked at each other like I was psychic, but I explained it’s my wife, and they said to jump in the back. I told them I was a firefighter with Cheshire FRS and would stay out of their way while they tended to her, but I just wanted to see her so she knew I was there.”

Cathy was taken to Aintree Hospital in Liverpool. Over the next few days, doctors waited to see just how much damage the stroke had done. It was a scary, frustrating time for the couple.

“We couldn’t get any answers from anyone,” says John. “Both our employers were asking what was going on, but we didn’t know if it was going to be a week, a fortnight, a month or longer. Eventually, one of the doctors said to me that a thousand people could have a stroke and it would be different for all of them, so it wasn’t that they didn’t want to give us an answer, they just couldn’t.”

After being in hospital for three months, Cathy was eventually told she could go home. But the couple had no idea their problems were only just beginning, and that a new and unexpected stress was about to present itself.

“Imagine someone you love having been so ill, not knowing whether they were going to survive, and you’re being pulled in all directions while you wait for answers,” says John. “You finally get out, trying to learn to adjust to life afterwards. Then something as stupid as a disabled parking badge becomes one of the biggest causes of stress in your life.”

While going back and forth to hospital appointments, John needed to be able to park in a disabled bay to help get Cathy get out of the car, as she was now in a wheelchair. But the application took longer to be processed than they expected, so they couldn’t get one quick enough, and every time they visited the hospital, they’d get a parking ticket.

“The nature of a firefighter is to want to help people, so it didn’t make sense to me when it constantly felt like no one wanted to help us.”

“It was just something we didn’t need,” says John. “Every single visit I’d waste time trying to find the ticket manager to explain. It wasn’t just about the time impact, but the endless stress and injustice of it. She was clearly not abusing the space, all we wanted was to get her home to get her ready for bed, and once again, I was arguing with a ticket manager.”

Trying to navigate the various complications of the benefit system took its toll on John. For someone who had always been quite calm, after coming up against ‘hurdle after hurdle’ and increasingly frustrating bureaucracy, he found himself getting more and more angry. During a conversation with Cathy’s employer, where they said they would be cutting off her salary as she had exceeded her allowance of sick days, John snapped.

“I felt this surge of rage in my head at the injustice of it, because she’d worked there for over 30 years. The stress of it all had sent me completely over the edge, and I just saw red. In a nanosecond I was planning how I could kill them and get away with it before the police got there. It was like having an angel and devil on each shoulder. The only reason I managed to calm down was the thought of a police officer turning up at our door to tell Cathy and our son that I’d been arrested for murder. But that’s what it was like. I went from 0 to 100, literally in seconds. I knew I had to do something about it.”

While Cathy was in hospital, John’s colleagues at the station had been enquiring with The Fire Fighters Charity about the support we might be able to offer the couple. One of our Welfare Caseworkers supported them through applications with their disability allowance, and Cathy had been invited to Jubilee House, under the watchful eye of the Nursing Team. Recognising he needed help himself, John asked if he could speak to one of our psychological therapists.

“They were brilliant at helping me find coping mechanisms to calm myself down. You can compute a stroke or an illness, but to come up against all of these people who seemed to be deliberately obstructive during what was a already a difficult time, I just couldn’t compute that. The nature of a firefighter is to want to help people, so it didn’t make sense to me when it constantly felt like no one wanted to help us. But they worked a miracle on me, and I’m a lot more calm now.” 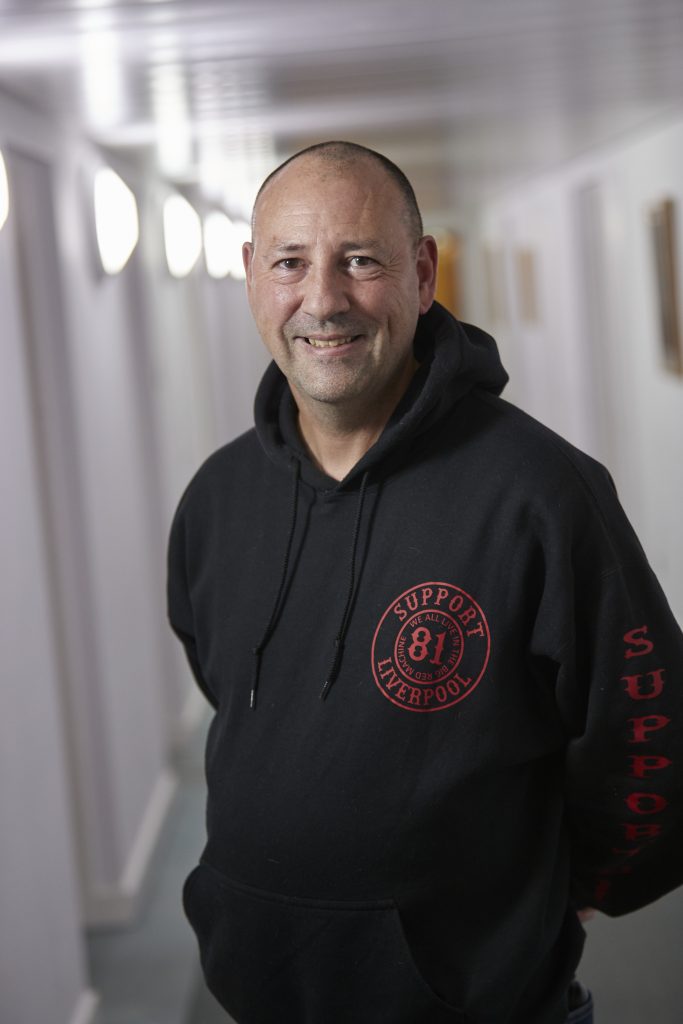 For Cathy, Jubilee House has become a second home: “I just absolutely love it here. It’s inspirational, being here makes you feel like you’re not alone. It inspires you to talk or do things you might not normally. Plus seeing people in a similar boat to you makes you stop worrying and feeling self-pity. I was so confident before my stroke, working as a Health and Safety Executive for the Civil Service. But I’d been really struggling and couldn’t stop thinking ‘why me?’. It affected my speech and my ability to walk and just all of my confidence was gone. But coming here brings you out of your shell. The nurses are absolutely wonderful and really can’t do enough for you. They help me with my hair and putting lipstick on, and help me find other women to speak to. It’s like a holiday. I get the holiday blues whenever we drive away.”

Being at Jubilee House has also opened Cathy’s eyes to the different activities she can still enjoy: “I used to love gardening but couldn’t do anything after my stroke. But we can tend to the gardens here because they’re raised beds, and it inspired me to turn an old wheelbarrow into a herb garden when I got home. We also play games and even do baking, which I’ve carried on when I’ve got home. The hydro pool is my favourite, I just love to float and feel weightless, and I love the Alter G anti-gravity treadmill, feeling like I could walk forever. I can’t praise the variety enough.”

For John, who retired last year to become her full-time carer, knowing Cathy is in safe hands when she comes to Jubilee House is a huge relief: “Sometimes I stay with her, and other times I just go home for a bit of a break myself. The close attention she gets is unbelievable, they’re almost too nice! On a hospital ward, people are busy and get to you when they can, but the ratio of nurses to beneficiaries at Jubilee House is amazing. There’s always someone there for her, they’re just so accommodating. And I was worried she’d find it too macho an environment, but the staff have a way of identifying someone else to introduce her to, who she has common ground with.” 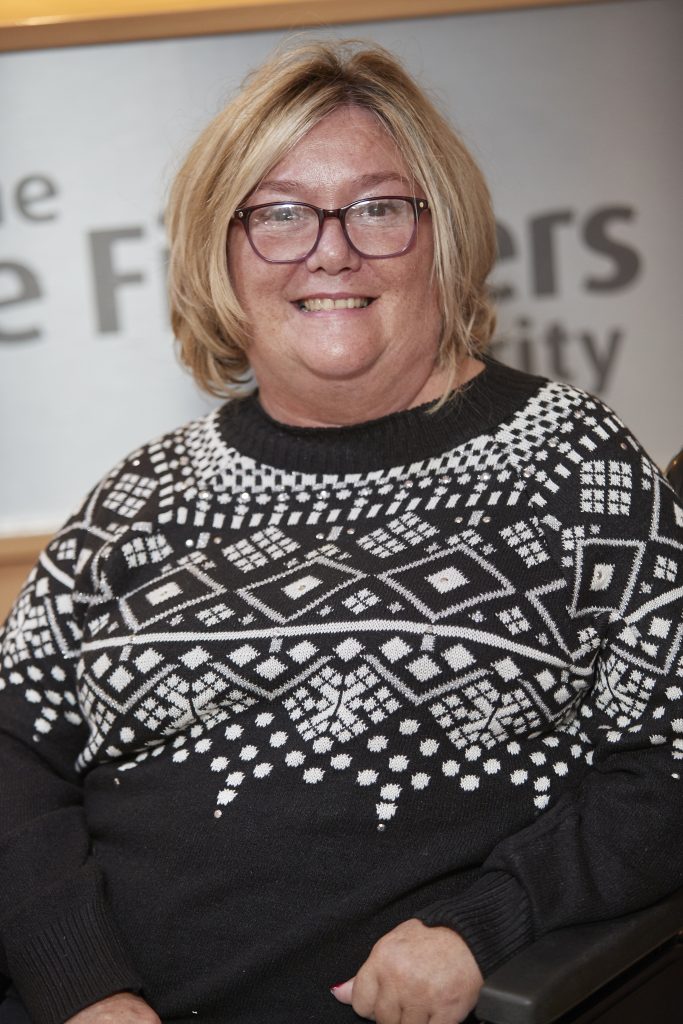 The Charity means so much to both of them that John is planning an epic fundraising challenge to give something back. And they even drove up to Penrith from Liverpool for the day, just to sit down with us to share their story.

“When you hear something that comes genuinely from the heart, it’s so much stronger,” says John. “Too often on station, you sit round the mess table and someone says they’re off to a centre and that’s it, you don’t really know what goes on here. But I always try to talk to people about our experience, because it has been outstanding. If no one knew what the Charity does, it wouldn’t exist. Which is why we have to support it; you may never need the Charity, but your wife might some day, or your son. One day, something might happen out of the blue to you too, and you’ll be as glad The Fire Fighters Charity is there as we were. Life has changed massively for both of us, but you just do your best to get on with things.”

If you or your partner are struggling to adjust to a life-changing condition, don’t suffer in silence, let us help. Give us a ring on 0800 389 8820 or enquire online and see if we could support you too.