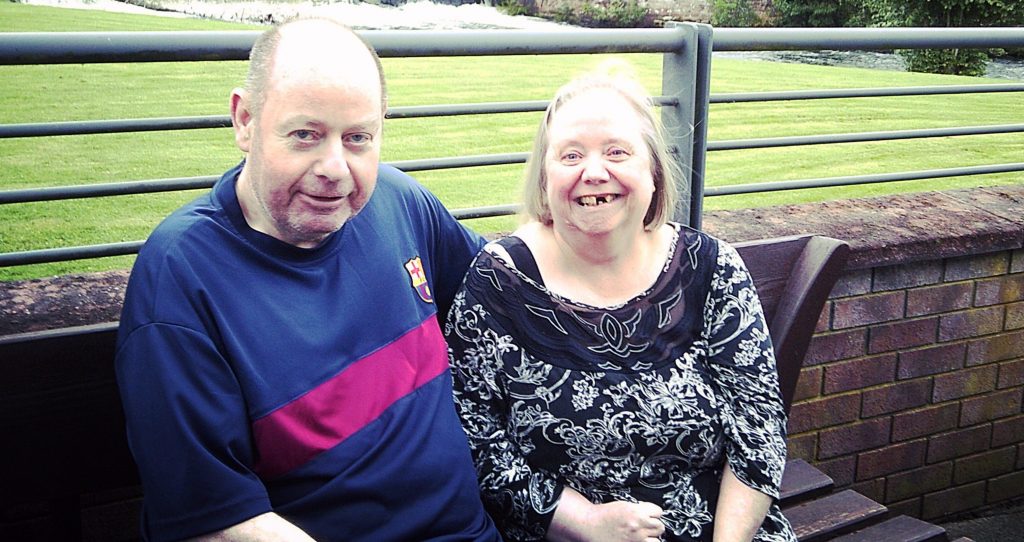 Asking for help is not an idea that comes naturally to Norman Meechan. A Scottish firefighter who spent 31 years with the service, he had always thought he could manage by himself without having to trouble anyone. But when his wife, Shonah, had a stroke and he later developed Parkinson’s Disease, it took him having a nervous breakdown before he realised how important it is to let others help you.

On an otherwise ordinary afternoon in September 2003, Norman and Shonah Meechan were browsing cars at a local Glasgow garage when their lives were changed forever. Shonah bent down to put something in her bag, sat up, and said she felt funny.

“Her face looked like it was starting to fall,” says now-retired firefighter Norman. “We rang an ambulance, which by luck was round the corner and within ten minutes, she was in hospital.”

Doctors informed Norman his wife had had a stroke. She was in her early 40s. While under observation, Shonah became unconscious, and spent 11 days in a coma. Norman was told her prognosis did not look good and he should brace himself, but then she woke up.

“I remember saying I don’t care if she’s like a vegetable, as long as she can come home with me. But she perked up, and despite being paralysed down one side, she was soon back to her old self.”

After three decades in the service, Norman decided to retire from Scottish Fire and Rescue so he could be there for his wife. Shonah spent five months in hospital, where Norman says the level of care she received was ‘absolutely fantastic’.

Her ward looked out over a patch of grass and a nurse suggested Shonah, a keen horse rider, might benefit from a special visitor: “She said why don’t we get your horse down? So we did! We brought it to the hospital and wheeled her over to it, and the horse licked her face. We were all crying, it was a really special moment. Things like that, the hospital were just so amazing and kind until the moment she left.”

But it was here when things started to unravel. Norman, determined to care for his wife alone when she came home, rejected offers of help from friends and local authorities.

“People told me to get help, but I said I didn’t need it,” he says. “I couldn’t be told. I said I’d look after her myself. I just kept thinking, you’re a firefighter, you can tackle this yourself.”

Norman started looking into what he could do for Shonah, declining offers of help from social workers. He applied to a private care company for help, and soon ended up paying around £700 a month for her to be visited a couple of times a day, insisting he could do everything else himself. And they managed well enough for a few years, despite the impact it took on Norman’s own wellbeing.

“People told me to get help, but I said I didn’t need it. I couldn’t be told. I said I’d look after her myself. I just kept thinking, you’re a firefighter, you can tackle this yourself.”

Then while out walking one day in 2007 and pushing Shonah in her wheelchair, Norman started scuffing his feet. He went to see a specialist who diagnosed him with Parkinson’s.

Still determined to keep life as normal as possible for Shonah, Norman tried to maintain their old hobbies and interests, including the 100-mile round trip to take their horses to shows, something she had always loved doing. But his efforts came at a price.

“I was getting more tired and more grumpy,” he says. “At that time, we didn’t have an electric stair lift and some nights it would take me over 40 minutes to carry Shonah up the stairs, bumping her up each one at a time. I was exhausted. People started saying things to me like I’d lost weight or that I was looking stressed, needing a shave or a haircut. I was cutting corners and not washing. I’d always taken pride in my appearance but things were getting worse and worse.”

It was this decline in Norman’s appearance that attracted the interest of Welfare Case Worker Irene Ramsden. Based in Jubilee House in Penrith, where Shonah had become a regular visitor, Irene insisted Norman start to join her on her visits to give him a rest as well.

“When we got back from Penrith, life carried on. But I woke up one morning and didn’t have the strength to get Shonah to the bathroom and I just couldn’t take anymore. I sat there weeping and couldn’t stop.”

Norman experienced a huge panic attack, which landed him in hospital for ten days with sheer exhaustion. A psychiatrist came and spoke with him, and that brief conversation was a revelation.

“I honestly thought I was dying but he explained that was normal,” says Norman. “He also explained the difference between panic attacks and anxiety attacks, and gave me some coping mechanisms to help me calm myself down.”

While he was in hospital, Irene liaised with local authorities and Norman’s son, putting things in place to try and relieve some of the pressures at home.

“I was all over the place, but Irene was blooming brilliant,” says Norman. “What with her being a nurse previously, she knew the things to ask for and things I needed. She was just wonderful.”

Irene managed to get Shonah and Norman – then aged 53 and 58 – registered with the necessary care provision through social services, spoke to GPs and community nurses, and helped with applications to their financial statutory entitlements. She also organised an occupational therapist to complete an assessment of their home, which they eventually left to move to a safer bungalow, also supported by Irene. Their bathroom was adapted into a wet room, doors widened and ramps installed and Irene liaised with social services for two carers to visit them both five times a day to help take the pressure off Norman and let him find time to focus on his own health, as well as Shonah’s.

“I wish I’d asked for help sooner,” says Norman. “You think you know it all, but with this, you know absolutely nothing, so let people help you. Probably the biggest thing for me was saying to myself ‘I have mental health problems, but I am dealing with them’. That first time I admitted to myself and to others I needed help was very hard, but it’s taken the pressure off.”

“I wish I’d asked for help sooner. You think you know it all, but with this, you know absolutely nothing, so let people help you.”

Shonah and Norman continue to visit Jubilee House a couple of times a year to give them both a much-needed break and to help them work on their core strength. Despite being paralysed down one side, Shonah works on her walking with physios using padded bars and advice, to keep her moving. And for Norman, knowing she is in safe hands allows him to relax as well.

“Being there is like being back among family” says Norman. “Nothing is too much bother, you’re made to feel like you’re the only person there. The treat you as part of the family, it’s just an absolutely wonderful place.”

Norman says he doesn’t like to think where he or Shonah would be without the help of The Fire Fighters Charity. “Some people say I would probably have been in a box by now,” he says. “It’s just the point of contact, knowing they’re there. They never say no, they never let you down. They greet Shonah like an old friend when she visits and she’s made to feel like a queen. I keep saying to any firefighter I meet, if anything happens to you or your family, remember The Fire Fighters Charity, they’ll look after you.”

Are you caring for a member of the family and would like to speak to a member of our Welfare Team to see how we could support you, get in touch today. Phone our Support Line on 0800 389 8820 or apply online. Because you don’t need to suffer alone, we are here to help.

“I keep saying to any firefighter I meet, if anything happens to you or your family, remember The Fire Fighters Charity, they’ll look after you.”